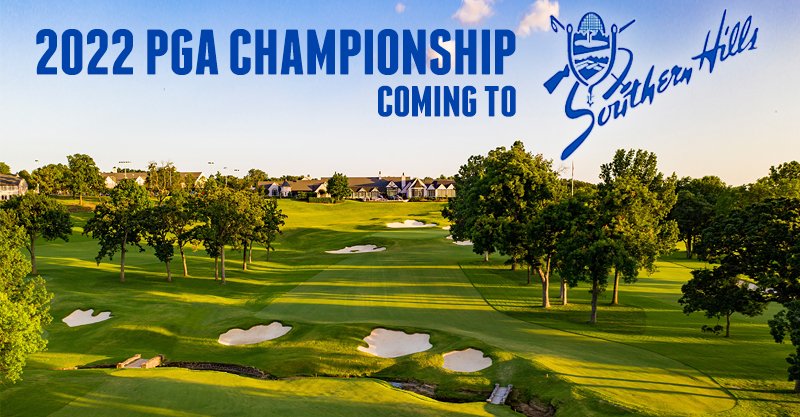 The 2022 PGA Championship is coming to Southern Hills Country Club May 19-22, the PGA of America announced today via Twitter. It will be the fifth PGA Championship and eighth major championship to be held at the Perry Maxwell-designed course which opened in 1936.

The event was scheduled at the Trump National Golf Club in Bedminster, N.J., but was moved after former President Donald Trump was accused of helping  incite a mob that attacked the U.S. Capitol building on Jan. 6 while the Senate and House were tabulating electoral college votes to certify the election of now President Joe Biden.

Kerry Haigh, Chief Championship Officer of the PGA of America,  approved the move to a venue to a venue the PGA of America knows well and trusts. The 2021 Kitchenaid Senior PGA Championship is scheduled May 27-30 at Southern Hills. PGA staffers are on the ground lining up volunteers and operations and combined with Southern Hills staff have set a record for that event for corporate sales. From an operational and marketing standpoint, the move was a no-brainer. “We’re excited to be able to host it,” said Southern Hills General Manager Nick Sidorakis. “It’s a great opportunity for the club, the city of Tulsa, and the state. It gives us the ability to showcase the restored golf course while it is fully relevant. We’ve got an opportunity to really make a statement in showcasing Southern Hills, Oklahoma and Tulsa.”

The PGA of America selected Southern Hills despite the interest of other high profile clubs. Also, there some blow back directed against the PGA from Trump supporters, heightening concern that bringing the tournament to a state that not only voted overwhelming for Trump but one where seven of eight Senators and Representatives were in favor of delaying certification of the electoral college results was a concern.

Tulsa, however, has a long-standing reputation as a strong golf community and Oklahoma is a golf state. Certain individuals both within the PGA, at the club and in the Oklahoma political hierarchy worked hard to convince the decision makers at the PGA of America that Oklahoma would put aside the politics and embrace the PGA Championship.

From a political standpoint, the Oklahoma politician who stood up the strongest and loudest to assure the PGA of America that it would be welcome was Lieutenant Governor Matt Pinnell, who tagged the PGA in posts, left phone messages and welcomed them through interviews. Pinnell is also secretary of tourism and branding for the state.

“We wanted to make clear the state was supportive and would do everything we could to make it a reality,” Pinnell said. “We have a major event incentive through the Department of Commerce that will come through the City of Tulsa that reimburses qualifying expenses.”

“We know how big of a deal this is for the city and the state in terms of economic impact. We want this to be an Oklahoma event. And it’s not just a single or a double, it’s a home run. It will impact hotels, restaurants and many small businesses that have really been hurting. And our cities and state live and die on sales taxes and events like this generate a lot of revenue. It will showcase the city of Tulsa and the state of Oklahoma to millions of people around the world and we will help promote it all the way through.”

It will be the fifth PGA Championship held at Southern Hills and the seventh in Oklahoma. Previously the event was at Southern Hills  in 1970 (Dave Stockton), 1982 (Ray Floyd), 1994 (Nick Price) and 2007 (Tiger Woods). It was held in 1935 at Twin Hills Country Club in Oklahoma City (Johnny Revolta) and in 1988 at Oak Tree National in Edmond (Jeff Sluman).

This will be the second time Southern Hills has stepped in to host the championship for another club that ran into turmoil. The 1994 event was originally supposed to be at Oak Tree National in Edmond, but that club’s owners Landmark Land Co. were in a battle with the Resolution Trust Corp. that eventually forced a firesale of Landmark assets including Oak Tree.

In 2017, Southern Hills was awarded the 2021 Senior PGA Championship and a PGA Championship no later than 2030. In 2020, the PGA of America announced that the event would be coming to Tulsa in 2030. It was not immediately clear if Tulsa stepping in for Bedminster would mean losing the 2030 date.

Hosting a PGA Championship can be worth millions in revenue to a community. If the current pandemic has largely receded by that point, 30,000 or more fans could attend daily, filling Tulsa bars, restaurants and hotels with golf fans. The overall economic impact of a PGA Championship was estimated at more than $100 million in St. Louis in 2018.

“Hosting the PGA Championship is a tremendous honor for our community,” said Tulsa mayor G.T. Bynum. “I am confident with our work to host the Senior PGA, Tulsa will be ready to host this incredible event along with the many visitors that will be in our city. As the vaccine continues to be dispersed in Tulsa and throughout the country, we will be ready to welcome visitors and the PGA team safely to Tulsa.”

Back to back majors It will be the first time Southern Hills has hosted majors in back-to-back years but not the first time it has hosted huge events consecutively. It followed the 1994 PGA Championship with the Tour Championship in 1995 and 1996. Superintendent Russ Myers said the course, which recently underwent a huge restoration project led by architect Gil Hanse, would be more than ready.

“Any damage done to Bermuda grass in May will recover quickly. Any concern from a grass standpoint about the May date would be if we have a cold spring is the rough ready for a championship. But I don’t really think that will be a concern.”

Myers said it was an honor for the PGA of America to have the faith in Southern Hills, his staff, the city and the community to bring the event to Tulsa.

“They recognize that the membership, the golf staff and everyone here is fully invested to partner with them to achieve the common goals. They had a lot of choices and for them to choose here is a credit to everyone involved.”