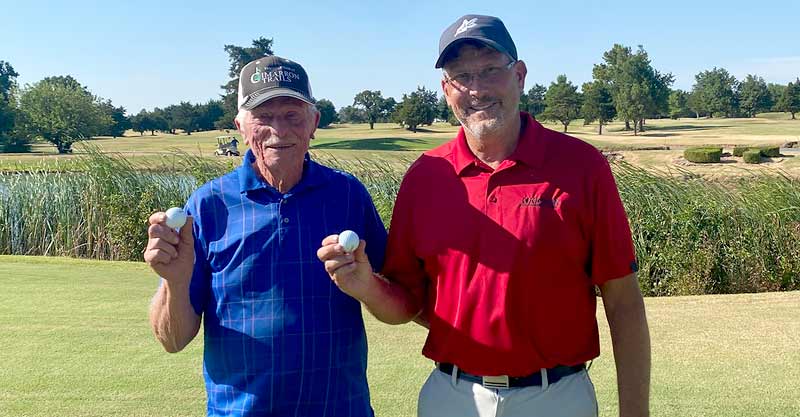 In the annals of golf oddities, one occurred Wednesday in Oklahoma that almost defies calculation.

Bill Littlefield, 80, of Perkins, an avid golfer since his boyhood, made his first career hole-in-one, the magical stroke coming on his home course at Cimarron Trails Golf Course.

Bill got his ace on the 10th hole, using a 7-wood to knock one in from 130 yards. Thrilled, he called his son Mark, a 56-year-old electrical contractor in Stillwater who has also played untold thousands of rounds without ever making a hole-in-one.

After congratulating his father, Mark went out for a weekly evening scramble with friends at Stillwater Country Club. Sure enough, on the 168-yard par-3 16th hole, Mark ripped an 8-iron and the ball descended into the deepening shadows. He wasn’t certain where it stopped until reaching the green and finding it in the bottom of the cup.

“It’s still hard for me to believe this just happened,” Mark said Thursday. “I had a friend calculate the odds of this at 1 in 786,000 but I’m not sure how he came up with that.”

The odds that both would have played this many rounds without ever making an ace and then to have it occur for both within hours, wow.

Mark’s son Daniel is 17 and plays for the Perkins High School team which finished third in Class 4A this spring. He already has two career aces.

The two elder Bradshaws have yet to sit down to share the experience. Mark had a crew to buy drinks for late Wednesday at Stillwater CC, while Bill is a volunteer for Meals on Wheels after retirement from his career as a soil conservationist and was busy Thursday morning.

It should be quite a family celebration. If the Golf Gods are real, they were in a good mood Wednesday.