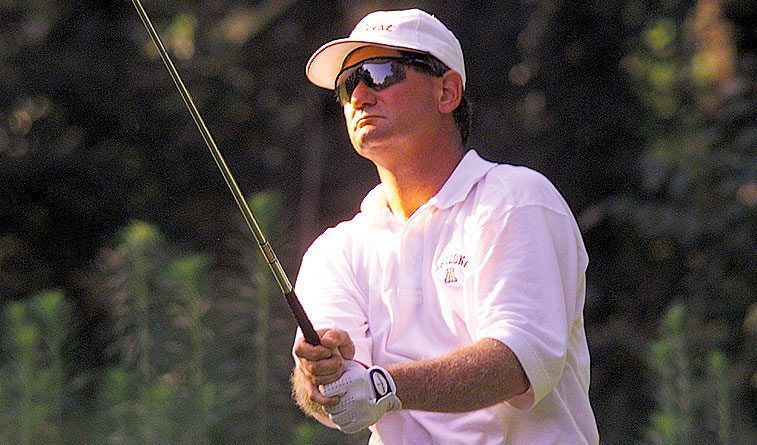 Around Oklahoma Around the State PGA of America SCSPGA
April 3, 2018April 4, 2018 Ken MacLeod
Like and Follow Golf Oklahoma

Editor’s note: Tulsa-based PGA professional Pat McTigue, a long-time friend and supporter of Golf Oklahoma, recently resigned as a lead instructor at GolfTEc Tulsa to pursue other career opportunities potentially outside of golf. Here are some reflections on his career and the industry. – Ken MacLeod

Phew! 32 years in the golf business, from the bag room to the shop, entrepreneurial efforts and everything in between. While the game gave me much, it also took away much. From the excitement of building a business that was to be my retirement and legacy, to seeing the dream crumble and lead to financial trouble and much soul searching, the game and business have been a massive roller coaster.

I was blessed with the tools to be a top player, and look back on my tournament successes fondly. While that success was mainly on a regional basis, I still had the ability to be competitive with many fine players that had much more national tournament experience. Had my practice habits been more focused and often, I would have enjoyed even more success. I had the good fortune to be SCPGA player of the year twice, won an Assistant’s Championship, two Club Pro Championships, a Match Play Championship and a Section Championship. I qualified for and played in five Professional National Championships, one Senior PNC, several Nike (see Web.com) tour events, one PGA Tour event and numerous State opens.

Due to back, elbow and wrist issues, it’s nearly impossible to practice much, and painful to play, resulting in a span of five months that I haven’t been on the course. To be sure, I rarely if ever played golf to “have fun.” My purpose every time I teed it up was to win. Whether that be titles, money, beating more experienced players or simply the rush of getting on a roll and shooting a low score, I’ve never experienced anything as exhilarating as competitive golf. Now, when I play a casual round with friends, I want to have fun, but the beast comes calling on the first tee and tells me that I should shoot 66. When that beast no longer exists, and pain is minimized, I may find my way back to the game.

If I do make my way back and can enjoy casual golf, my competitive days on the course are over. In the limited number of tournament situations I’ve been in over the last couple years, a new phenomenon has made its way into my game. Whatever success I’ve had in competitive golf, it’s primarily due to my putter. When I won, it always came down to the fact that I putted extremely well. I remember entire tournaments where I did not have a three putt or miss anything under 8 or 10 feet. My putter made my short game look good, as I was not a great chipper but routinely cleaned up my messes by making par putts up to 12 feet or so. The new phenomenon I encountered is the complete inability to settle in over a short putt. It’s not yips. It’s more like a panic attack, and I have no desire to experience that feeling again. Ever. I’m not the first to experience this, and it seems that if that happens, it’s normally the best part of one’s game goes berserk.

It’s no wonder why I’ve chosen to walk away from the golf business, as a severe lack of passion for the game really doesn’t lend itself to being an effective teacher. I do believe I have a wealth of valuable and pertinent knowledge to pass along to golfers, and I want to be able to get it out there, but there needs to be a different outlet for dissemination. Hence, I’m trying the written word.

One area that I still enjoy talking to golfers about is the mental side of the game. Often I would hear people come in saying “I think my problems are all in my head.” Duh, it’s golf. As poor as many golf swings are, most golfers mental processes are much worse. I drew a lot of my mental teaching from the books of Dr. Bob Rotella. to the point that I pretty much required my clients to buy them. Dr. Rotella’s teachings are simple, common sense approaches to the intricate mental issues surrounding golf. Increasingly over the last three years, I realized that my only remaining passion in golf was getting people to think better and more efficiently on the course. Swing mechanics became very dull and boring (while necessary), to the point I simply hated trying to fix golf swings. It was much more fun and challenging to get into a golfer’s kitchen and rearrange the utensil drawers.

One of the more useful habits I used when starting with a new client was determining whether he or she was more of a linear or creative thinker. Linear thinkers (e.g. engineers, accountants), tend to have severe trust issues and think of the golf swing by position rather than by motion. Nicklaus said correctly that golf is a game of motion, not positions. Linear thinkers by and large will wait to see proper results before they will choose to trust a swing, which is exactly backwards. In order to hit good shots on the course, we have to start with the belief that we can achieve a good result. I define trust as it pertains to golf in a unique way. I think the proper state of mind to hit good shots is convince oneself that he doesn’t care where the ball is going. With that attitude, its’ much more likely he will hit a good shot. Nearly all really bad shots start with fear of a bad result.

Creative golfers, like me, present a different challenge. I’ve said many times that I would rather have needles poked in my eyes than think about swing mechanics. If anything, I suffered from a surplus of trust in my swing, which I found out much too late had recurring faults that caused massive inconsistency. I trusted a swing that wasn’t consistent, and that worked sometimes and sometimes not.

Creative thinkers must pay much attention to swing mechanics in their practice, while linear thinkers need to develop feel and trust.

Part of my disdain for swing mechanics is the staggering number of swing theories inundating TV, internet and print publications. I knew my teaching days were numbered when I stopped paying attention to what top instructors were teaching. It seems the more knowledgeable I became about swing mechanics, and the technology used to analyze them, the simpler and more basic my instruction became. If I had success in teaching mechanics, it’s because I don’t have a preferred ‘method’ of teaching. I really like Chuck Cook’s approach where he said that he has preferences of what he likes to see, but doesn’t force those preferences on golfers. In my own words, I never tried to pound square pegs into round holes. Take what the client can do and build on it, rather than making massive changes to make the swing ‘look’ better.

Ultimately, the first priority is to establish more consistently solid contact with the ball. If you’re not hitting a high percentage of solid shots, I don’t want to hear about your slice. Let’s hit the ball solid first, at which point we will usually see a shot pattern develop. Even if it’s a shot pattern we don’t like, it has become somewhat predictable. Predictable ball flight is the primary requirement for being able to navigate your way around a golf course. If you hit the ball solid and produce a shot pattern you can start to keep up with your group and begin to enjoy the game. If you don’t like the shot pattern, then work with a qualified PGA member to improve.

It’s completely ironic that while I’m walking away from primary employment in the golf business and currently have zero desire to play golf, we’re on the eve of what may be the most wide open and exciting Masters tournament in memory and I couldn’t be more pumped for this week. Tiger back on track is clearly the most compelling story, while Phil and Bubba are really playing well. Dustin Johnson with a chance to redeem himself from last year’s bizarre withdrawal (hope he’s staying in a single level residence), and a dozen or more young studs ready to go. Potential winners are too many to name, and while the result rarely lives up to the hype, I believe the tournament might surpass hype this week.

As with most golfers, I have a love hate relationship with the game, but in my case it’s likely I took it to bigger extremes than most. The highs were very high, the lows very low, which is kind of the way that I played. I don’t know where the road leads from here, but I’m anxious to take the next step on that journey.