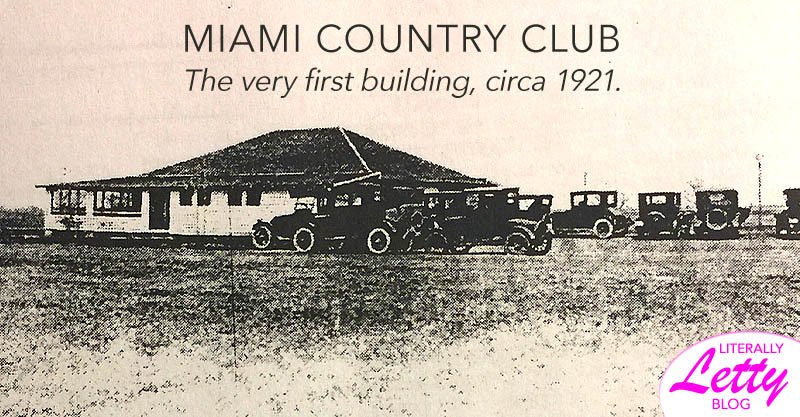 A part of herstory, my story, is history and a colorful journey through the time in which my parents grew to adult hood.

In those days, the golf professional made his money from a salary, giving golf lessons to members, golf shop income, and in the middle fifties, dad bought the first set of gasoline golf carts.

The income from the golf carts became the money that sent my sister and I to college.

Mother became the book keeper for the golf shop, but the larger income from the social gathering aspect remained on different books, kept by a secretary accountant. The country club was privately owned and operated by its members, so my father reported to the President of the club from year to year. In July 1984, my home, the Tudor style clubhouse in Miami, Oklahoma burned to the ground.

To this day, a part of me can walk through the clubhouse from the basement to the top attic home, where custodians of her history lived.  I walked and crawled through the empty attic and listened the sounds below.

The children’s room balcony, the bar, the locker rooms, the golf shop, and **snake pit my father dug out of the clay basement where golf carts were stored, all are part of my deepest memories.  My childhood and that of my sister’s, Jonya Lea Stapp, began there  in 1954 when our father and mother moved from Independence, Kansas to Miami to take the job as Head Professional Golfer and Instructor, along with greens superintendent, and manager of the clubhouse. Because my parents shared so many roles in the running of the golf shop, my sister and I were practically raised there, even though we lived in town. As a result my childhood memories are filled with those colorful people and days.

The country club began in 1914, thanks to the foresight of a committee of men, and one major investor, George Coleman.  1914-1929 Rockdale Country Club

Our very first golf professional in 1921, was Ed Dudley, who went on to become the first Golf Professional at Augusta National Golf Club. He was hired by the most notable amateur to play the game of golf, Bobby Jones.  Ed Dudley’s Golfing Career. Dudley designed the original four golf holes with sand greens.

Pieces of Professional Golf History in Oklahoma began to fall into place as I read the newspapers from Miami, Ok, and Joplin, Missouri. One quick fact that caught my attention was this line from 1924 April 11:

Can we even imagine times like these? Women were playing golf and our local newspapers carried regular information on calendar events for both women and men.

When the depression hit the country, citizens of Ottawa county and the Tri-State area, were not hit as hard as other areas of the country, because of the discovery of lead and zinc in the late 1800’s. By World War I the Tri-State area of Oklahoma, Missouri, and Kansas became one the most prolific producers of lead and zinc that were needed for the war effort. As a result lead and zinc mining kept the area employed. Sadly, there were no government regulations placed on mining in those days, as a result our current history of my home area is darkened by the EPA reports of the poisoned Tar Creek area of Ottawa County.

Between 1927-30 George Coleman a major investor in the mining area built one of the world’s most  renowned theatres:  The Coleman Theatre which opened April of 1929.

That same year in December the Rockdale Country Club opened its doors to the new Clubhouse.

From 1928–1946 the Miami Golf and Country Club became a regular host for the Oklahoma PGA. However, reports vary on this particular golf tournament and records that might have explained when it was medal play and when it was match play burned in a fire a few decades ago. I found it quite exciting to read how involved the community of Miami became in the game of golf thanks to the newspapers coverage of the tournaments and the well-known names who came to town. A gallery was a regular at these events. Miami at that time had caddy’s and a caddy shack located off the north side of hole #1. Oklahoma PGA Championships

Through the 1930’s golfers in the tri-state area, including women, traveled often to play other golf courses. Often our Miami New-Record ran AP and other sports stories. This is one I found especially interesting:

1932 April 7 MNR The headlines read: Headaches May Help Lower Golf Score according to Dr. C. R. Griffith, psychological research director of athletics at U.of Illinois. “The golf player with a headache has the advantage over his companion who feels ‘fit as a fiddle.’ The headache keeps him from pressing and from experimenting. He is out merely to play the game and this means he is out to do that which he has been most in the habit of doing.” “If a man goes into a golf game feeling fine, either of two things may happen. He may start to make each hole in one and thus be guilty of pressing. Or he may experiment. Pressing breaks up timing and rhythm. Experimenting may lead to disaster. The man who has a headache or is not at his best, will not be guilty of pressing. He will play his natural game.”

There may be some hidden truth to this statement.

In 1934 funds were raised by a team of Miamians to purchase the debt of the Rockdale Country club and change it’s name to the Miami Country club.

Though most of the sports writers used very descriptive language and vocabulary there were a few writers who gallantly took time to rib the local golfers and their status in the community, many of the events that would presently make Facebook news:

George Coleman, Jr, club president, has suggested that the Miami membership stage a big stag party on the eve of the pro-am, draw names of the amateurs with the pros and form a Calcutta pool. A percentage obtained from the pool will be used for cash prizes for the pros and merchandise for the “simon pures.” (Men of  financial means were sarcastically called ‘Simon Pures’ by the press or media. They were considered men who could play golf six days a week pick up a little cash, and call themselves amateurs.)

The women golfers were also active social ladies and bridge club members. They took on the roles of organizing seasonal decorations and dances, selecting area bands to play for entertainment, helping with various local groups. Well into my childhood through the 1960’s I remember the earnest attention they gave to decorations and modeling of the newest décor.

St. Patrick’s decorations, spring violets and an abundance of good food, together with the hospitality extended by the three hostesses, Mesdames H.B. Coban, Carl Britt and Lloyd Newton, made the ladies’ day at Miami Country club one of the outstanding of this season. Potted Shamrocks, green tapers and crepe paper were used on the luncheon tables. High score at the bridge was won by Mrs. A.C. Wallace. The sewing prize was awarded to Mrs. Roy Green. The next luncheon will be served by the club cateress and the hostesses on the occasion will be Mrs. L.A. Wetzel and Mrs. Matt Connell.  Members playing in foursomes are urged to have lunch with the group and play at reserved tables afterwards. There will be no additional charge for such reservations.

This small red tee, only one inch and a half long, is a personal souvenir from a thirteen year old golfer and Bing Crosby fan, Sarah Hilliard Mirjanick. Sarah received this autographed tee from Bing Crosby on the day he played golf in Miami. (September 25, 1942) The picture of the tee is shared by Sarah’s daughter, Rebecca Mirjanick Davis.

**Stay tuned for the TIMELINE and personal stories that I can add through the 1950’s and 1960’s. Use this URL to access any of the Miami Golf and Country club blog:  <https://mgcchistory.blogspot.com/>

** The snake pit might have seen snakes wonder through it, but it was built or dug out for the purpose of practicing golf during the winter. My father set up a mat and a large indoor/outdoor net that held the golf balls hit from a player on the mat. There was room for only one player (or one couple hiding behind the net and kissing). It also stored hidden beers and liquors that were illegal in Oklahoma in the 1950’s-early 1960’s.

*** To read more stories from the early days of golf in Oklahoma and the Miami Golf and Country Club TIMELINE please click on the following links.