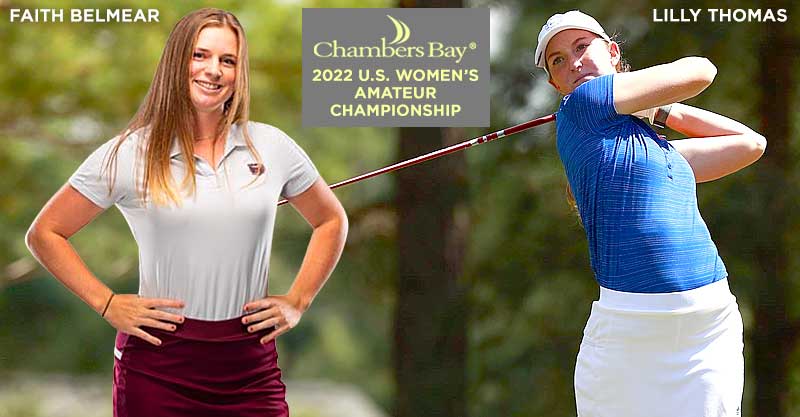 Faith Belmear of Owasso and University of Tulsa senior Lilly Thomas are two players with Oklahoma ties who will begin play in the U.S. Women’s Amateur Championship Monday at Chambers Bay Golf Club.

Belmear, a senior at Missouri State University, qualified with a 1-over 73 on July 19 at Indian Creek Golf Club in Carrollton, Texas. She made a a birdie putt from 10 feet on the second playoff hole to secure her spot.

A senior from Owasso, Okla., Belmear, who also won the Missouri State Amateur this summer, was one of seven in the 69-player field to punch their ticket to the tournament at Chambers Bay Golf Club in suburban Seattle, August 8-14. Chambers Bay is ranked the no. 22 public course in America and was the site of Jordan Spieth’s 2015 U.S. Open victory. The tournament begins with 36 holes of stroke play with the low 64 qualifying for match play to determine the champion.

Thomas made the U.S. Women’s Amateur Championship field with a round of 69 in qualification at the Old Fort Golf Club in Murfreesboro, Tenn., on July 12.

The low 64 scorers after 36 holes of stroke play will advance to match play on Aug. 10. Match-play rounds, Aug. 10-14, will be covered on the Golf Channel.

Thomas, from Bentonville, Ark., finished the 2021-22 collegiate season at the NCAA Stillwater Regional after earning all-conference accolades for the second consecutive season. Thomas registered five top-20 performances in 11 tournaments, including four top-5 finishes in the 2021-22 campaign. She had a career-best second place showing at the Texas State Invitational with a 2-under par score of 214.