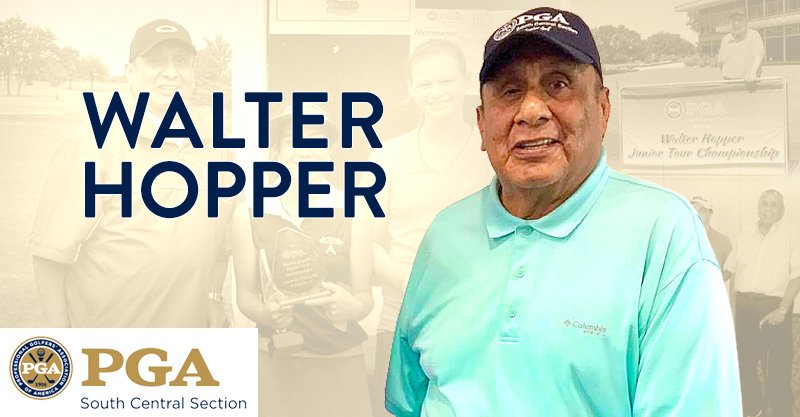 Walter Hopper, a giant among junior golf proponents and the architect of the PGA South Central Section Junior Tour, passed away Thursday,, according to the section office.

A traditional Indian funeral funeral will be at 10 a.m. Tuesday in his home town of Homin at the Osage Chapel int the Osage Indian Village. It will be followed by a traditional Osage dinner at the Event center next to the Chapel area. More official obituary information will be added.

Hopper, born in 1947, was a junior golf enthusiast who in 1984 began running a state junior golf tour as a volunteer in his job as golf professional at Pryor Creek Golf Course. He was hired by the section in 1996 and brought his junior golf tour under the section auspices and also served as director of competitions and as a rules official until his retirement in 2009.

The South Central Section Junior Tour grew to a 40-45-event behemoth capped by the season-ending Tournament of Champions, later renamed the Walter Hopper Championship in his honor.

The junior tour provided a competitive outlet for thousands of juniors, many of whom went on to collegiate or professional careers. It is going strong today. Here in Oklahoma it combines with the Oklahoma Junior Golf Tour to give juniors a full range of beginning and competitive events in which to hone their skills.

“Walter was the driving force behind the junior tour,” said long-time section professional Dan Langford, director of golf at Earlywine Park in Oklahoma City. “What you had was junior tournaments scattered around the state, none of them having anything to do with the other. Walter came in and brought in an organized system that really benefitted the junior golfer throughout the section.

“All the success we’ve had with the junior tour all started with Walter. And Walter, he made everyone feel like you were in his inner circle. He was the only guy who could make a ruling against you and you were okay with it.”

“It’s not very often that you meet someone who is truly generational in their work, but that’s exactly what Walter was,” Davis said. “It seems that every junior event I attend, I run into a parent who would ask about Walter and then proceed to smile and tell me about how he was running the junior tour when they were kids and now their kids are playing on the same junior tour.

“I will always remember Walter handing out trophies at the junior tour championship in Muskogee one year.  After the event was over, one of the winners came up to Walter and I and explained that his dad had won a trophy from Walter when he was a kid and they still had it.  He was so excited to be able to put his trophy next to his dad’s trophy knowing that they both received them from Walter.

“When I think of how many kids he impacted through his life and the game of golf in our section, it’s really incredible.”

Thompson and Hopper were close friends as well as administrative associates.

“All the kids loved Walter,” Thompson said. “He was funny, humble and one of the most generous men I ever got to meet.”

“Walter was a tireless worker promoting the game through the South Central Section,” said Morri Rose, his counterpart with the Oklahoma Junior Golf Tour. “He was a true gift to so many kids. A true visionary for the game. My son and thousands of others learned to love the game because of Walter. I am so saddened.”

Hopper was a proud member of the Osage Nation and served in various capacities with the tribe including election board chairman.

He enjoyed the annual section pro-ams in Las Vegas as well.

“I remember one morning he could barely move,” Thompson said. “He told me blew out his knee. I asked how he did that, and he said playing roulette. Never really did figure that one out.”

“Walter was one of the luckiest people I have ever met,” said former section president Cimarron Grubb. “I had the pleasure of spending a lot of time with Walter at the casino and golf course during many Vegas Pro-Ams. Whether it was stuffing his pockets full of money at the craps table, nonchalantly winning $1,000 on numerous occasions on the $1 Wheel-of-Fortune machine, or hitting one of the worst 9-iron skull-shots from 150 yard away . . .hitting the middle of the flagstick and dropping right in the hole for a $600 skin! He had the Midas touch and would simply smile and give that little chuckle after every win.

“Walter was a great husband, father and friend. His passion for junior golf is the reason why many are playing or employed in the game of golf today. He will be missed.”