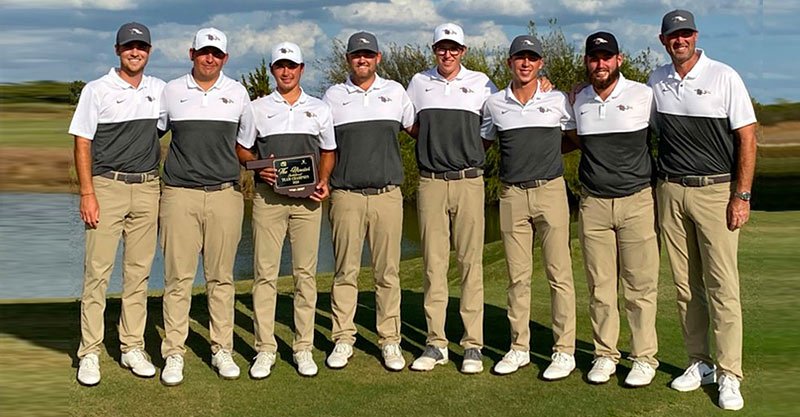 After he and his Oklahoma Christian teammates dominated en route to a 19-shot team win on Tuesday in The Hrnciar at The Territory Golf and Country Club – the Eagles’ fourth straight win in the annual event – Brictson still had some work to do, even after shooting his second straight 2-under-par 70 and finishing at 4-under 140.

He eventually prevailed in a four-hole playoff over Tobias Andersen of Cameron for medalist honors, giving Brictson the fourth collegiate win of his career. Brictson made a 15-foot birdie putt on the par-3 No. 4 after hitting a 3-iron from 225 yards into a 15 mph headwind.

Amazingly, in three of his tournament wins, Brictson – from Merida, Mexico – has prevailed in a playoff. He won a four-hole playoff in September 2019 to win the Ryan Palmer Foundation Invitational in Amarillo, Texas, and in April 2019, he won a one-hole playoff to take top honors in the Heartland Conference Championship tournament title.

He now is one of only eight OC golfers ever to win as many as four tournaments. Also on that list is his teammate and fellow NCAA Division II All-American, senior Trevor Norby of Carlsbad, Calif. Norby, the first-round co-leader after a 67, posted a 75 on Tuesday on the 7,110-yard course but still held on to tie for third place at 2-under 142 with another teammate, freshman Mateo Pulcini.

Pulcini, from Rio Cuarto, Argentina, posted consecutive 71s and his third-place showing was the best of his young career. OC placed three golfers in the top four of a tournament for the first time since October 2012, when the Eagles finished 1-2-3 in the National Christian College Athletic Association Championship tournament in Panama City Beach, Fla.

The high finishes of Brictson, Norby and Pulcini proved key as the Eagles pulled away from the rest of the nine-team field, each a Lone Star Conference program. After entering Tuesday with a five-shot lead over West Texas A&M, OC ended up with a comfortable double-digit win. The Eagles’ team score of 287 (1-under) gave them an overall score of 572. Cameron (591) edged West Texas A&M (592) for second.

The tournament, hosted by Cameron, has had three different names the past four seasons, but OC has won it each year since 2017. It’s the first time the Eagles ever have won the same tournament four straight seasons. This year’s win was the 69th in the history of the OC program but the first since the Eagles, coached by David Lynn, won last year’s tournament at The Territory.

Behind their top three, the Eagles had plenty of success, too. Alex Motes of Sulphur Springs, Texas, rebounded from a first-round 78 to fire a 1-under 71 on Tuesday and tied for 16th in the 54-man field at 149. OC’s fifth starter, Alejandro Armijo of Rio Rancho, N.M., tied for 24th at 153 after a final-round 76.

Led by freshman Tobias Andersen, who narrowly missed our on his first career first-place playoff win, and junior Devin Whipple, the Cameron men’s golf team moved up the leaderboard to finish in second place at The Hrnciar on Tuesday.

After shooting a 295 on day one of their home tournament, Cameron entered the final round in fourth place, two shots behind Midwestern State and six shots back of West Texas A&M. CU kept pace in their final round by shooting a 296 to jump both MSU and WT to finish in second place with a total score of 591.

Andersen, CU’s standout freshman from Ikast, Denmark, recorded the lowest score of the second round at the always tough Territory Golf Course, carding a 4-under 68. That scored, paired with his first-round 72, put him in a tie with Oklahoma Christian’s Andres Brictson for first place with scores of 140 for the 36-hole event.

Both players made hit great shots during the four-hole playoff, with each making par on holes one, two, and three. On the par-3 hole No. 4, Andersen teed off first and put his drive right in the middle of the green, just short of 20 feet from the pin. Brictson’s drive hit just short of the pin, about 12 feet away. Andersen’s first put had the right speed but was just inches to the left of the cup. Brictson ended the playoff with a clutch putt for birdie.

As for the rest of the Aggie lineup, junior Devin Whipple just missed out on a top-5 finish, shooting a 75 on Tuesday to finish with a two-round score of 144; he tied for sixth individually. Logan Durst, who had a second place finish at this tournament last season, tied for 27th with a score of 154 after carding a 76 in the second round. Joey Kirk carded a 77 to end the event with a 155 and Tyler Kaman finished with a 159 after a tough score of 83 on Tuesday.

Cameron’s “B” team shot a 307, the rounds sixth lowest score, ending the tournament with a 615. Donovan Osborne tied for 16th individually with a 149, shooting a 74 in the final round, as did Preston Holmes, who had a 36-hole score of 154. Freshman Josiah Crews carded a 78 on Tuesday, giving him a 150 for the tournament, while Luke Stock finished with a 162 and Jordan Hardin had a 169. As an individual, Caden McAnally carded an 84 in the final round to give him a 169 for the tournament.