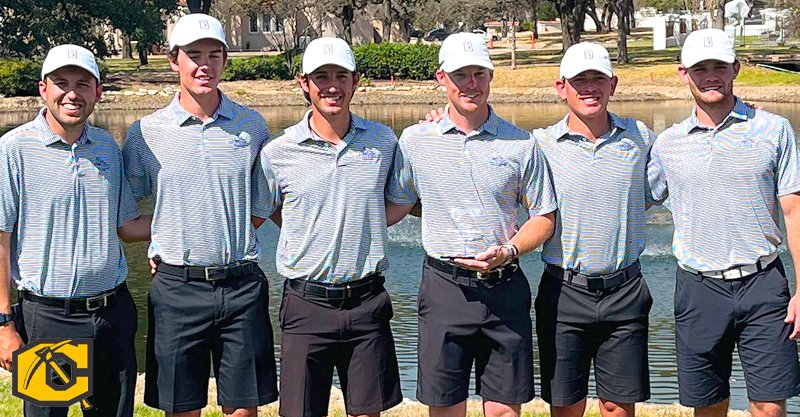 SAN ANTONIO, Texas – Cameron jumped up two spots in the final round of the Rattler Invitational on Tuesday to record its first tournament win in more than four years.

Cameron trailed leader St. Mary’s by nine strokes but made up that deficit by shooting 4-under in the final round to finish the tournament with a score of 874. CU’s first place finish is their first win since the 2017-18 season.

Joey Kirk led the charge  in the final round, shooting a 67, bouncing back from a rough start to the invite. The junior had five birdies and an eagle during his impressive third round.

Hamish Murray had the top finish by an Aggie individually, placing fourth with a 54-hole score of 218; the freshman matched his first-round score of 73 in the final round. Preston Holmes carded a 71 on Tuesday, tying teammate Trevor Mierl for 16th place with a score of 221. Kirk finished with a 222 and Tyler Kaman totaled a 225 for the three rounds.

Statistically, Murray led the Aggies with 11 birdies with Kirk and Mierl each making nine during the tournament. Holmes led the Black and Gold with 36 made pars with Kaman totaling 34 and Murray and Mierl each having 33. Cameron made 166 pars and 43 birdies during the event.

The Aggies bested Texas A&M-Commerce by one stroke and host team Rattlers by two. Midwestern State placed fourth while No. 20 Henderson State came in fifth and No. 4 Arkansas Tech placed sixth at the Dominion Country Club.

MSU’s Jake Doggett led the field with a 210 54-round scored to win the individual title, beating the second-place finisher by six strokes and Murray in fourth place by eight.

The Aggies will look to ride their momentum of the win into next week’s tournament, the Spring Bulldog Clash in Pawley’s Island, S.C., Feb. 28-March 1.

Southwestern Oklahoma State finished 12th.  Gregor Weck led the way for the Bulldogs, finishing tied for 16th overall after shooting 221 (+5) through three rounds. His lowest round of the tournament came in the second when he shot an even par 72. Weck was tied for 6th after the first day, but a final round 76 (+4) dropped him back to 16.

Anders Strand and Conner Boydston both shot 233 overall as SWOSU’s next top finishers. Strand’s best round was his first where he recorded a 74 (+2). Boydston was more consistent however and recorded a third-round 76 as his best showing. Gerardo Herrera (235, +19) and Heston Brown (238, +22) rounded out the Bulldog scorecards.