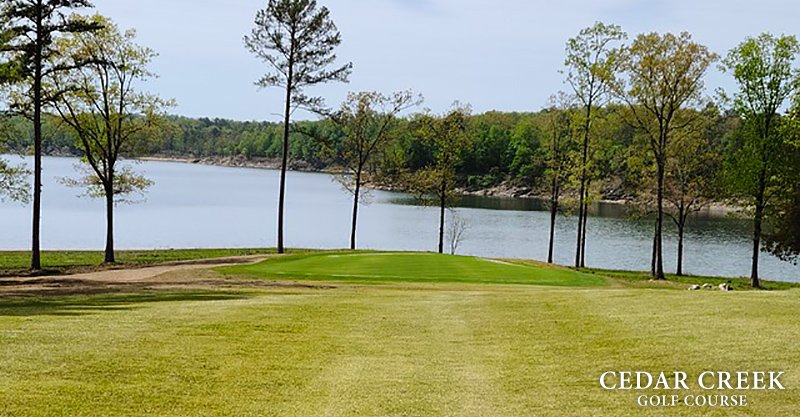 The first phase of improvements in an intriguing future for the Cedar Creek Golf Course in Beavers Bend State Park near Broken Bow will be celebrated Thursday.

Oklahoma Lieutenant Governor Matt Pinnell, architect Colton Craig, who worked on the new greens, and course manager/superintendent Kurt Adams, along with a host of others dignitaries, will be on hand to celebrate the course’s new Champion ultradwarf Bermuda greens and a slew of tree removals that have opened up lake views and added much needed sunlight to the turfgrass on both the fairways and greens.

The greens were sprigged last fall and still are in need of several months of warm nights and days before they will be where Craig and Adams want them.  Proper grow-in was complicated by a mixup in the timing instructed by Champion resulting in using chemicals to kill the previous greens too close to trying to sprig the new greens. Adams had to resort to overseeding bent grass on areas where the Champion has yet to take off.

The main point, however, remains that Oklahoma, led by Pinnell’s enthusiasm, is investing in an area that is exploding in popularity, particularly among north Texans who have built cabins by the thousands in the deep woods and vales surrounding Beavers Bend State Park. The course is nestled near the Kiamichi Mountains in one of the prettiest areas in the state.

Adams said that visitors to the southeastern Oklahoma area who have not been in the past five years will scarcely recognize the area, with dozens of new restaurants, a distillery, go-cart tracks and other signs of a growing tourist destination.

“On a Monday morning it’s bumper-to-bumper for an hour going south with everyone trying to get back to Texas,” Adams said.

“The growth in this area has been 100 percent year over year and hasn’t slowed one bit,” Pinnell said. “It’s truly remarkable and the sky is the limit for the area. I first came here when I was running for the office and fell in love with it immediately. And the golf course is a hidden gem that has so much potential.”

Pinnell expects the new greens and tree clearing to be just the first phase of a transformation for Cedar Creek that could even include it some day leaving the auspices of the state park golf course system to be managed by a private company as part of a lease of 45 acres of developable land nearby.

The state is already taking proposals on development of the land, which include a requirement of building a new marina on Broken Bow Lake. In some fashion, Pinnell would like to see continued investment in Cedar Creek to add some mounding and more character to the green complexes and an increased maintenance budget for Adams, along with a green fee structure that will provide that increase.

Pinnell said he is working with the Oklahoma Department of Transportation on a plan to upgrade the infrastructure in the area to reflect the phenomenal growth. Pinnell said a possible hunting lodge with the ability to host corporate retreats from Dallas is another option for the future.

“I really feel very blessed to help champion everything that’s going on in the area,”  Pinnell said. “I can’t thank Kurt Adams enough for what he’s done for that course on a limited budget. And Colton Craig, he’s not making enough money on this but he loves Oklahoma and sees how special the golf course could be. I think in a Phase Two, we will be adding a lot of character to it. We’re getting together a plan to promote that and really to promote all of our state park courses.”