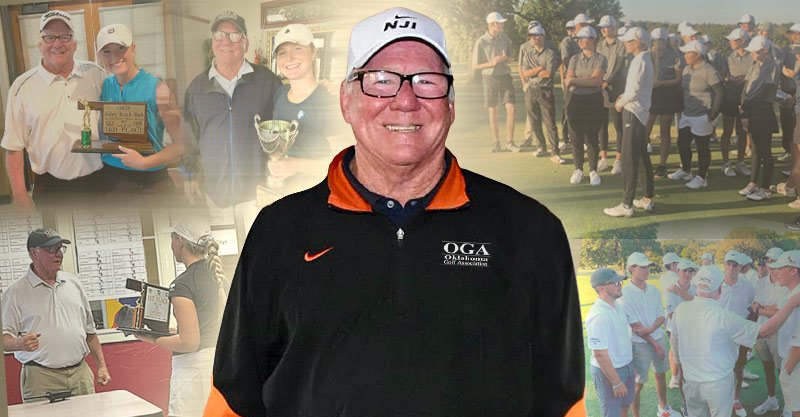 Below are a few of the reactions to Morri Rose announcing 2023 will be his final season running the Oklahoma Junior Golf Tour. Feel free to add yours below or on Facebook or Twitter.

The announcement by Morri Rose that he would be retiring after 22 years of running the Oklahoma Junior Golf Tour elicited reactions from former players, parents, coaches, pros and more.

“Morri is an absolute sweetheart. He says time and again, you are all my kids and he meant it. He’s a legend. Playing OJGT against Yujeong Son, Kaitlin Milligan, Shaebug Scarberry gave me the confidence to go play in AJGA and USGA events. He was absolutely crucial in that. Oklahoma is losing a really special guy.”

“I get sentimental about this because I recruited and helped coach his son Dayton at OSU. He has done so much for junior golf and the kids know it. I watched Ryder Cowan at this year’s Red River in Ardmore, he had already signed with OU and had nothing to gain by being there. He was there for Morri.

“In a football state like Oklahoma, he gave the kids somewhere to compete in the fall and changed the way kids looked at the game. There was no longer this long off season.”

“The pros supported the OJGT from the start. Tee times were slow on Saturday afternoons due to football. But the bonus they didn’t realize was how many parents would rent carts. It turned out to be a great two days for the courses.

“We did everything out of the trunk at the beginning. We had no computerized scoring, no website. The local pros would help and then when we got with the OGA it took it to another level.

“Right from the start coaches knew what this meant. Mike McGraw would be out there early watching the kids warm up. And I knew (OU coach Ryan) Hybl was serious when he showed up during an OU-Texas football game.”

“There are tons of guys from Oklahoma who have played professional or college golf at a high level. I think if you ask any of them who had the biggest impact on their career, one of the first persons they would all say is Morri.

“For a state like Oklahoma, he’s a huge reason why we’ve been so successful. As far as a population to actual people playing golf for a career, we’ve got to be near the top of the list.

“From when I was 12 and we met, he knew who I was and was invested in what I was doing. He wasn’t just someone who runs the events and gives out trophies. He genuinely cared about every one of us. I really appreciate what he has done. He gets a huge thank you from me.”

Sam Humphreys, played collegiate golf at Tulsa and UMKC, now co-host of the 73rd Hole Podcast and works for The Sports Animal:

“The thing about Morri that I respect so much is he will call you just to catch up and see how you’re doing. He doesn’t forget about you when you’re done playing OJGT. And I would argue that without the OJGT, Oklahoma golf would not resemble what it is today. He gave me an opportunity to learn how to compete and learn how to win before going out to play AJGA or national events.

“And the Red River Challenge was everyone’s favorite event. (For) the banquet the night before he would bring in great speakers. A lot of us bonded at those events. Morri fostered a lot of friendships that are strong today.”

“I’ve had two kids play for him and they would both do anything for him. He texted me last week and makes me feel like I’m the greatest teacher on earth. He just has so much care and concern and it was always genuine. The culture that he instilled, all those kids love each other and, for my kids, their best friends are players they met on that tour. He loves each kid and does what he does because of that.”

Doudican works the OJGT events with Morri, doing the computerized scoring and sending results to media and golf organizations.

“Nobody is more of an advocate for junior golf than Morri,” Doudican said. “He wants everyone to succeed. And when they do, when a guy like Talor Gooch or Kevin Tway goes on, it just benefits everyone involved with the OJGT. It just shows this is the best of the best, competing and succeeding and going on to the next level.

“He has a unique relationship with the kids. We give them the business and try to keep it light so it’s not always a grind. The transformation of the tour over the past decade has been amazing. The scores they shoot today . . . incredible. And we had waiting lists of up to 50 players for some events last year.” “The first thing is Morri just loved all of us so much. Every time you would be walking up to the first tee, he would be asking you about school, your golf game, everything. When I won my first AJGA event he was the first one to call me and congratulate me. He always encouraged me, even when I played a bad round. I just love what he did for us and loved seeing him at every event.”