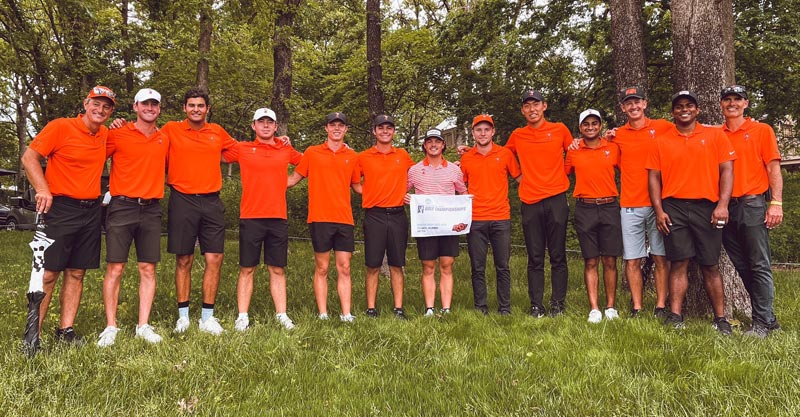 STILLWATER – After a perfect drive on the par-5 18th hole at Karsten Creek, his 54th hole in two days, the moment started to sink in for Oklahoma State junior Austin Eckroat.

“I realized it would be my last full swing in competition at Karsten Creek,” Eckroat said. “I really started to feel like this is it.”

The Edmond product who won the Class 6A state championship on this course as a high school freshman at Edmond North pulled his 2-iron shot into a bunker left of the green, blasted out and managed to save his par, capping a 1-under 71 that featured incredible ball striking but mediocre putting by his standards.

It was part of a dominant performance by Oklahoma State, which rolled to a 14-shot victory over Illinois in the Stillwater Regional, marking the surging Cowboys as a team to watch in the upcoming NCAA Championship May 28-June 2 at Grayhawk Golf Club in Scottsdale, Ariz.

OSU won its fifth consecutive regional championship, beginning with a victory at Karsten Creek in 2016, and 15th regional overall. It was the team’s fourth victory in its last five starts and fifth win of the season.

“I said early in the season that we were a deep team with a lot of potential and we’re starting to realize that now,” said OSU coach Alan Bratton. “We’ve got a lot of young guys who work really hard. The guys are really coming on and executing at a high level. I love the group that we have and I’m looking forward to Scottsdale. This is the start of the championship and I’m looking forward to seeing what we can do out there.”

Eckroat finished alone in seventh place after his second consecutive 71 but was bested by two of his teammates. Bo Jin was the runnerup to SMU’s Noah Goodwin, who shot 15-under over three rounds. Jin finished with a 4-under 68 to wind up at 9-under 207. Sophomore Eugenio Chacarra tied for third at 211 after a closing 70.

Jin, who was also the runnerup in the recent Big 12 Championship at Prairie Dunes, has emerged as a force for the Cowboys, as has Chacarra.

“Bo is a bit of a throwback golfer,” Bratton said. “He can flight it up, down, just play the shot that’s required. He really listens, is very coachable and loves to compete. He and Austin both do a great job of putting the past behind and moving on to the next shot.”

Freshman Brian Stark, who was inserted into the lineup Monday afternoon and responded with a 7-under 65, shot a 68 and staked his claim to be the fifth starter at nationals. Stark recently shot a course record 62 in qualifying at Karsten Creek.

Sophomore Aman Gupta tied for 14th place at 217 after posting a 73 during his final round.

“We have come a long way over the year and I think we can now compete with anyone,” said Eckroat, who will be turning professional after the NCAA Championship and has a spot assured on the Korn Ferry Tour through the PGA Tour University. “I’m expecting us to go out there and win it.”

OSU finished the 54-hole event on its home course with a 28-under total of 836, which bested Illinois by 14 shots. The Cowboys’ 277 final round was the low round of the day by 12 shots as well.

Oral Roberts’ Jack Howes who qualified as an individual, posted a  79 to finish in a tie for 43rd.

SMU, Sam Houston and Little Rock advanced from the region in addition to OSU and Illinois. Auburn and Baylor, coached by former OSU coach Mike McGraw, both finished one shot behind Little Rock.

Sam Houston had to play the final round with just four players after William Holcomb, who was 6-under and in second place individually, was ruled out of the final round for having been in contact with a reserve on his team who tested positive for COVID-19. The team responded with a round of 295 to finish four shots clear of Little Rock and earn the NCAA Championship berth.