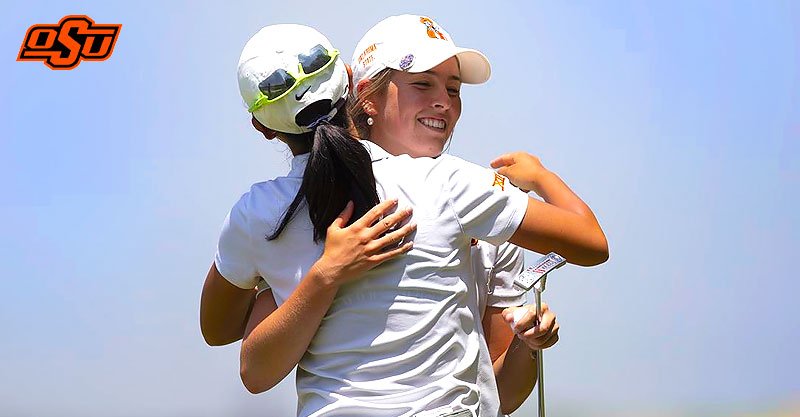 STILLWATER, Okla. —- During a hot and windy first day of the NCAA Stillwater Regional at Karsten Creek Golf Club, No. 1-seeded Oklahoma State women’s golf put itself in position to advance to the National Championship going into the final two rounds after carding an 8-over on Monday.

The Cowgirls finished tied for third with second-seeded Arizona State, three shots back of sixth-seeded Clemson in second place and four strokes back of Baylor, the three seed, who leads the field after the opening 18.

Fifth-seeded Michigan State finished the first day of competition in fifth, one spot shy of advancing and trailing OSU and Arizona State by seven shots.

Maddison Hinson-Tolchard led the way for the Oklahoma State individually, turning in a steady even-par round of 72 after shooting 1-under with no bogeys on the back nine. The round was her best in competition since March, when she shot a 66 at the Mountain View Collegiate in Tucson, Ariz.

Han-Hsuan Yu and Rina Tatematsu each turned in rounds of 74 to help the Cowgirls crack the top three. Yu used a hot start, going 3-under through her first six, to give herself a cushion heading into a tough back nine. Tatematsu remained even-keel all day, finishing with a birdie and three bogeys on her relatively uneventful scorecard.

OSU posted the second-most birdies as a team in the opening round with 14, only two less than Arizona State’s 16. Lianna Bailey played a big role in that, tallying five birdies, more than any other player in the field. She finished the day 4-over but carried momentum into tomorrow, having birdied three of her final five holes.

Hailey Jones rounded out the Cowgirl lineup and finished the day 10-over par with two birdies.

The Cowgirls will be back at Karsten Creek for day two of three on Tuesday looking to continue to move up the leaderboard and punch their ticket to the next round. OSU is set to tee off starting with the 9:06 a.m. group on hole No. 1.

Lilly Thomas, representing The University of Tulsa as an individual performer, ended her first round at the NCAA Stillwater Regional in 21st place after carding an opening round 4-over par 76 at the par-72 Karsten Creek Course on Monday.

Thomas, a junior from Bentonville, Ark., opened with two straight bogeys before a birdie on hole 3. She then bogeyed the next three holes to sit a 4-over par after hole No. 6. Thomas closed out the first nine with a par, eagle and birdie to take a 1-over par score into her final nine holes.

On the back nine, Thomas again opened bogey-bogey, but parred six of her final seven holes to finish 3-over par for the final nine holes.

Two Oral Roberts University golfers also qualified as individuals. Kiana Oshiro is tied for 30th after shooting 78, while Sarah Bell is tied for 52nd with an 83.

Spectators are welcome at the three-day event and there will be no admission charge. Parking is available along the road leading into the golf course.