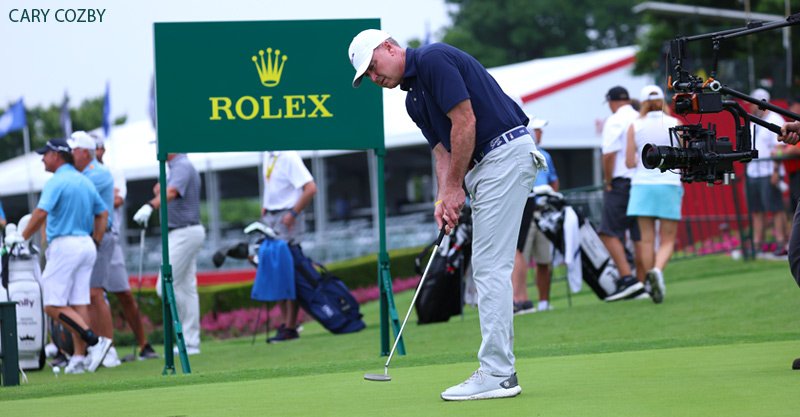 Wild cheers from the Southern Hills members tent to the right of the seventh green rang out as Cary Cozby walked on to the putting surface.

It’s going to be much more raucous Thursday if the popular director of golf at Southern Hills plays well in the first round of the 2021 KitchenAid Senior PGA Championship.

Cozby tees off on the first hole at 8:38 a.m. with Tom Lehman, who won the 1996 Tour Championship at Southern Hills, and Jay Haas. His 13-year-old son Banks is his caddie. His brothers Craig and Chance with their families will be in the crowd along with mom Karole.

Cary has been working diligently on his game since the PGA of America granted him an exemption to play in the tournament. He played well in a U.S. Open qualifier at Oak Tree Country Club and is a second alternate for the U.S. Senior Open after attending a qualifier for that event in Colorado.

An All-American at Oklahoma, Cozby has always been a strong competitor in South Central Section events, but like most PGA club professionals other duties take up far more time than practicing or playing. Running the golf operations at one of the most prestigious clubs in the country — what Cozby calls his New York Yankees job – leaves little time for playing outside of rounds with members.

Making the cut against the world’s best senior who compete in tournament completion on a weekly basis is not really the goal, it is simply to play to the best of his abilities and not let the moment get too large.

“I’ll be disappointed if I don’t handle it or just don’t play well,” Cary said. “But it would be tough to be disappointed this week. To get to play in this tournament, toi do it with my son, to do it with the membership . . . there won’t be anything disappointing about the week at all. I just hope it’s really good.”

The only thing missing for Cary, of course, is that his father Jerry won’t be on the grounds. The 41-year head pro at Hillcrest Country Club in Bartlesville passed away in 2000, and it’s still difficult for this reporter not to find him waiting with words of wisdom by a tee box or on the phone with a tip or just to talk golf.

“He would be over the moon about this and I know he’ll be looking down and happy that all of us are here together,” Cary said.

Cozby played a practice round Tuesday with Willie Wood of Edmond, defending champion from 2019 Ken Tanigawa and Kirk Triplett. He hit a few loose shots in the hole 7-8 stretch after the greeting and said concentrating will be key Thursday.

“When I could narrow my focus I hit good shots and when I kind of wavered and wasn’t thinking about what I should be doing, I hit loose shots,” Cary said. “So that will be the biggest challenge for me. Obviously I know where to hit it.

“If I can handle the mental part, I think I can play well. I hit it far enough from where we’re going to be playing. I was handling it well today until we got around No. 7 . . . I don’t want to just go out and wave to everybody and play terrible golf. I want to play good golf just like every one of the guys that are here. “

Banks, who normally would have been finishing up his final day of school Wednesday, has been getting a real world education from some of the other caddies, a few of whom have turned swearing into an art form. But Cary said he’ll be the nervous one Thursday morning, not Banks.

“I saw Tom win the Tour Championship here and have watched both those guys my entire life. So it will be surreal playing with two of the finest gentlemen ever to play the game.”