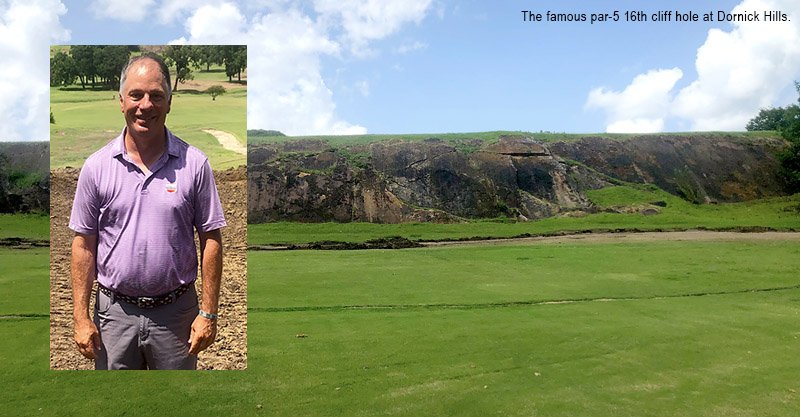 Here’s a sample of what you can find in our current issue. Pick up at your local course and subscribe today for the convenience of home delivery.

Whether it’s due to the new greens, the reimagining of many Perry Maxwell design features or trading on his considerable reputation, Tom Doak just wants to see his restoration of Dornick Hills in Ardmore enjoyed.

“Will this sell a lot more memberships, I don’t know,” Doak said. “But will it attract a lot more attention to a place that hasn’t been on people’s radar for a long time? Absolutely it will.

“A little of that will have to do with the fact that some people pay attention to what I’m doing. But there’s a ton of people who are going to know that Dornick Hills is Perry Maxwell’s first course and that nearly all of his courses are private. You can’t go to a Southern Hills or Crystal Downs or Prairie Dunes. But you can come here.”

Golf Oklahoma met with Doak during his mid-July visit to check on the progress of his pro bono restoration of Perry Maxwell’s first design, completed in 1914 on land the Ardmore banker and course designer owned and on which he now rests.

He checked on each green with his shaper Blake Conant of Dundee Golf. Conant and the others working on the project are being paid, thanks largely to member Jerome “Bruzzy” Westheimer, a Maxwell great-nephew whose foundation is donating $2.5 million of the $3.2-million project.

Doak, however, is not being paid. He volunteered to restore Dornick Hills in a conversation with a golf writer, a comment that ended up on the architecture website Golfclubatlas.com, where it was brought to the attention of member Joe Ward, who then got in touch with Doak to see if he was serious.

“I hope this gets more people to come and see this course,” Doak said. “It’s a spectacular place. Holes 14 (an uphill drivable par-4) and 16 (the famous par-5 cliff hole) are two of the most spectacular holes in the country. And for me, that carries a lot of weight. That’s what I’m looking for everywhere I go, something that’s unusual enough to really capture your attention.”

“It’s really impressive what Tom is doing here,” said Chris Clouser, Perry Maxwell historian and author of the Maxwell book, `The Midwest Associate.’ “I think it’s going to blow the membership away. What he’s doing will make a world of difference to that club. They are already getting some new recognition and some new membership just from having Tom Doak’s name attached. Soon they are going to have a lot better golf course.”

Doak has designed many unique and memorable courses the world over in the past 30 years, including six of Golf Magazine’s Top 100. He completed his first course in Ireland this year, St. Patrick’s Links, and is now helping Mike Keiser and his sons, creator of Bandon Dunes and Sand Valley, to build a replica of the Lido Course, just outside of Sand Valley. The Lido was a famous course designed by C.B. Macdonald along with Seth Raynor that existed on Long Island from 1917 until being reclaimed by the U.S. Navy during World War II.

In that job, there is pressure to recreate the course exactly as the Lido existed, using high tech 3-D technology. At Dornick Hills, which was Maxwell’s first design in 1914, there is the memory of old-timers, photos and some plans from earlier renovations showing changes to be made to the greens. But Doak basically has free rein here to position and build the greens as he sees fit, knowing what he does of Maxwell’s tendencies.

“We dig around and find old drainage channels, so we know where some of them were,” Doak said. “But even if we knew how they were shaped some of them were too steep to build back that way anyway.”

Dornick Hills will never be long by today’s standards, but it will challenge and sometimes frustrate today’s bombers.

“We’re doing the sneaky things we can to make it tougher,” Doak said. “That’s a lot of what Maxwell was about. His No. 1 hazard was gravity.

“College and high school players will underestimate courses like this. They will look at the distance and think they are going to shoot 30-under for four rounds, but they can’t. And some will get really frustrated and think the course has been tricked up. But no, that’s the way golf always was. That’s why Prairie Dunes is a good life lesson for kids.”

To that end, greens will certainly carry an element of danger if approached from the wrong angle. Holes 9 and 18 coming up the hill to the clubhouse will have considerable roll offs if the fairways are missed. A pond that used to guard the par-3 17th has been filled in but will be a difficult area to chip from. The driving range has been reduced to a pitching area so the first hole could be restored to its original tight layout. Many more changes, both dramatic and subtle, have been made, and those intimately familiar with the course previously will appreciate them most. See the Mike Holder sidebar on this page.

Doak first visited Dornick Hills in the 1980s, stopping by to see it as he did thousands of courses around the world as part of his research and his writings.

“Since it was his first course, it was the sort of thing I would always like to see restored, but I didn’t think it was a very real possibility,” Doak said. “But as it turns out Bruzzy has the same sort of interest in it that I do and that’s making it happen now.”

Doak, who built Pacific Dunes at Bandon Dunes Resort and Streamsong Blue at Streamsong Resort, among his most popular public access resort courses in the United States, has some previous Oklahoma connections. He was working for Pete Dye early in his career when Dye was designing PGA West in Palm Springs for Oklahoma pros Joe Walser and Ernie Vossler.

After Dye and Doak showed them the plans they had been working hard on, Doak remembers Vossler shaking his head.

“He said, `Pete, it looks like you’re trying to build the ideal golf course there. We don’t want that. We want the hardest golf course in the world. We want a course that’s so hard that people in Japan who have never been here will complain about how hard it is.’ ”

Dye delivered by making a course that was even harder than Oak Tree Golf Club, according to some. Doak won’t have that mandate here. He said when he spent a year in Scotland visiting hundreds of courses that his design philosophy crystalized.

“I saw 170 courses and what I took away at the end of the day was the attitude toward golf was just different,” Doak said. “A lot of times the golf courses weren’t in great shape and the greens were slow, but it didn’t matter.  They were a place a guy could walk his dog for two hours and still get in a round of golf and have a hell of a lot of fun. That’s what I want my courses to be.”