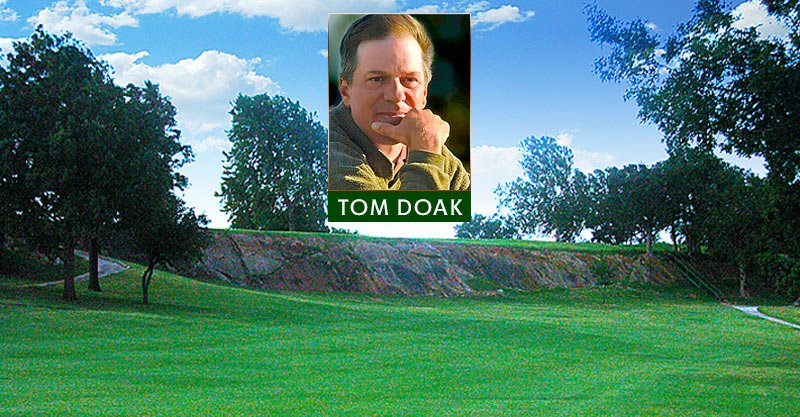 While some of the finest junior golfers in Oklahoma and Texas were matching wits and skills this past weekend in the Red River Challenge on the historic Dornick Hills Country Club in Ardmore, they may have noticed a group of men going hole to hole, intently studying greens, trees and other landforms.

One of those men was renowned golf architect Tom Doak, who has agreed to spearhead a restoration of Perry Maxwell’s earliest layout, home course and final resting place at no charge from his Renaissance Design Firm to the member-owned club.

Doak, a noted architectural “minimalist” who was a protégé early in his career of Pete Dye (Oak Tree National and Oak Tree Country Club), will oversee a project that will include all new greens restored as closely as possible to Maxwell’s original designs. The $3.2 million restoration will also include a new irrigation system and the removal of close to 500 non-native trees that have been planted over the years that are crowding fairways, causing both strategic and turfgrass issues. Bunkers and tee boxes will also be addressed.

The restoration will include work by construction firm Dundee Golf owned by Blake Conant, who also spent Friday through Sunday at Dornick Hills before he and Doak headed to Houston for this week’s Houston Open, being played for the first time at Memoral Park Golf Courses, where last year Conant and Doak completed a huge restoration of a course originally designed by John Bredemus in the 1930s. Doak told Golf Oklahoma today he would look forward to discussing the Dornick Hills project in depth after the Houston Open concludes.

The Dornick Hills restoration is being largely funded by a $2.5 million gift from the foundation of Ardmore businessman and philanthropist, Dornick Hills member and Perry Maxwell nephew Jerome Max “Bruzzy” Westheimer Jr. Members have raised another $200,000 thus far leaving about $500,000 to be secured.

The course will shut down in May of 2021 to begin the restoration. There is no official time frame on the reopening but it is likely to be the spring of 2022.

Doak is a huge proponent of the work of Golden Age architects and wrote a book in 2001 about Dr. Alister MacKenzie, the revered architect who was Maxwell’s mentor and collaborator on several notable projects, including Cyrstal Downs in Doak’s home state of Michigan, where he is a member. He had visited Dornick Hills in the past on a trip to see Maxwell designs in Oklahoma and written online that he would gladly help for free if the course was ever to be restored. When the project became a reality, member Joe Ward emailed Doak to see if he was still of that mind, and he confirmed that he certainly was.

Dornick Hills head professional Derek Claborn, and superintendent Brent Waite are excited about the project and what it could mean for Dornick Hills, which Maxwell designed and built in stages, completing the final 18 in 1923. Maxwell went on to have a huge impact on golf nationally but nowhere more so than in Oklahoma, where he designed Southern Hills Country Club in Tulsa, Oklahoma City Golf & Country Club, Twin Hills CC in Oklahoma City, Hillcrest CC in Bartelsville, Muskogee GC, Oakwood CC in Enid, Ponca City CC and others.

Two of the most notable – Southern Hills and Oklahoma City G&CC – have undergone restoration projects in the past two years that also included all new greens. Gil Hanse at Southern Hills and Tripp Davis at OKC G&CC both had the advantage of some original designs and old photos, while not much of that survives at Dornick Hills. Doak will use verbal accounts of members, pictures from the 1930s and research by Maxwell historians such as Chris Clouser (The Midwest Associate), who has written extensively about both Maxwell and Dornick Hills.

Clouser said he and Doak met in July to share his research on Dornick Hills and Doak also spoke with former maintenance workers located by Westheimer to get information on the original greens.

“It’s great that Tom is doing this,” Clouser said. “Dornick Hills is one of the keystone designs of the Southwest. If it hadn’t been built, a lot of those other great projects (Southern Hills, Prairie Dunes) wouldn’t have been built either. The ties to Maxwell as his course makes it a really special project.”

“From what I understand, we will be redoing the greens from scratch and taking them back as close as they can be to the original contours,” Claborn said. “A lot of the fake humps and mounds in front of the greens will also be removed and we’ll have more areas around the greens that can be closely mown for chipping instead of just pitching out of rough.”

Waite came to Dornick Hills in 2019 from Coyote Ridge in Carrollton, Texas, taking a pay cut for the opportunity to work at a historic Maxwell course.

“I’m a huge fan of golf course architecture and the Maxwell heritage was a big factor in my coming here,” he said.

The tree removal component may not sit well with some members who have been parts of committees that donated and planted saplings over the years that are now large trees shading fairways and limiting strategy to shots piped down the middle. Waite said some fairways were once 30 yards wider than they are currently. Only native species such as pecan and white oak were originally on the course.

“We’ll be restoring a lot of views,” Waite said. “You’ll be able to sit at the clubhouse and see a lot of the course. Plus if you hit it in the rough it won’t be on dirt and hardpan. You may still have a blocked shot, but you won’t just have to chip it out sideways every time.”

Doak has designed four courses currently rated in the Top 100 in the world by Golf Magazine, including Pacific Dunes in the Bandon Dunes resort in Oregon, Ballyneal in Colorado, Barbougle Dunes in Tasmania and Cape Kidnappers in New Zealand. An avid and outspoken architectural historian, he has written four books including the Confidential Guide to Golf Architecture.