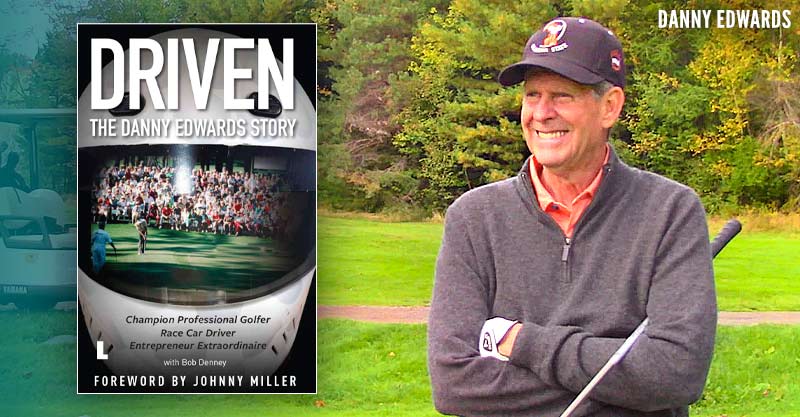 DRIVEN – The Danny Edwards Story is about pushing one’s limits with a resounding “Why not?” It’s about a professional golfer whose quest for speed translated into doing what nobody in the sport has previously accomplished – steering an automobile to victory in a premier national race.

It’s about hitting the brakes at the peak of his career to launch a revolutionary product that shook up the golf equipment industry, It’s about one of the most soul-searching challenges of his life, leading his peers to face PGA Tour leadership in a quest to protect player interests, financial accountability and transparency.

Danny’s first book DRIVEN – The Danny Edwards Story is published by Classics of Golf and now available for purchase in hard copy for $24.95 direct at www.classicsofgolf.com and on Amazon.

The new book is also available in eBook format for Kindle and Apple through the Kindle app for $9.99.

What they’re saying about DRIVEN – THE DANNY EDWARDS STORY:

“Nobody intersects the worlds of pro golf, racing, and business like Danny Edwards. This book takes you behind the scenes of how he won at all these games.”
– Jerry Tarde, Golf Digest

“Danny’s memoirs of a unique life are a study of what a nonstop, focused life will yield. In these pages, I believe that the reader will be astonished and entertained to learn of Danny’s lifelong success in so many ways.”
– Johnny Miller, Hall of Fame Golfer and Announcer

“Danny Edwards has lived such a huge life — golf star, car racing champ, unrepentant boat rocker — I’m surprised they could fit it all in one book. Maybe that’s why it’s such a rollicking ride.”
– Rick Reilly, Sportswriters and Sportscasters Association Hall of Fame

“I’ve known Danny Edwards for nearly 40 years, and believe me, there was nobody like Danny who was able to be a professional golfer and run cars the way that he did. I think it was the pure enjoyment of driving and competing that we loved about our sport. I was amazed how Danny was at the top of his game while not putting in the enormous time and energy that we all must do to achieve great results. I have always enjoyed Danny’s company as I have enjoyed any and all of my good friends.”
– Rick Mears, 4-time Indianapolis 500 Champion

“Danny’s role as player-leader of the PGA Tour from 1998 to late 1999 was unselfish, courageous, and competent. I know this first-hand as general counsel to the TPA. His sole purpose was to make things better for the tour player, and no doubt, many of the changes in tour governance which we all witnessed in the 21st century were first presented during Danny’s, Mark Brooks’ and Larry Rinker’s period of leadership. The book describes this period in Danny’s life in a fair and accurate manner. It’s a good read!”
– Richard Berthelsen, General Counsel (1983-2012) NFL Players Association

“Five-time PGA Tour winner Danny Edwards was born with so much physical grace and mental grit that he became far better than good at everything he tried – especially golf, but also basketball, auto racing, entrepreneurism, teaching and even labor relations. At the same time, an insatiable need for new challenges probably kept him from being even better at what he did best. Edwards’ latest venture is a candid memoir of an extraordinarily varied and eventful life that, despite his enviable gifts, was never easy and often star-crossed. A fascinating case study in the slipperiness of talent.”
– Jaime Diaz, Golf Channel Broadcaster

“Danny Edwards’ Tour career and mine intersected over a 14-year period, and we became good friends. Danny was well respected for his sportsmanship, commitment to task and an unflinching desire to work for the betterment of his peers and the game.”
– Mark Brooks, PGA Tour Professional

“Danny Edwards’ journey is a compelling story, one of the most unique and interesting I have come across in 35 years of covering golf in Oklahoma. His 2021 induction into the Oklahoma Golf Hall of Fame was extremely well deserved and golfers will be fascinated with the twists and turns of his career and the frank, inside stories from the PGA Tour, the world of professional racing and his business adventures.”
– Ken MacLeod, Executive Director, Oklahoma Golf Hall of Fame

“In the 12 years that I was in the company of Roger Penske and Danny Edwards, there were several things that came into focus. Roger felt that Danny was an enormously special person and the fact that he was such a fine golfer, was a bonus. Danny’s expertise and knowledge of the car industry was a double bonus. That fact that he could run with the best was one of Roger’s greatest joys. Roger never took for granted the 10 years and the incredible work that he and Danny did to make the Michigan 500 Pro-Celebrity Golf Classic happen. It raised millions for charity and strengthened their bond of friendship.”
– Walt Czarnecki, Executive Vice President, Penske Corporation