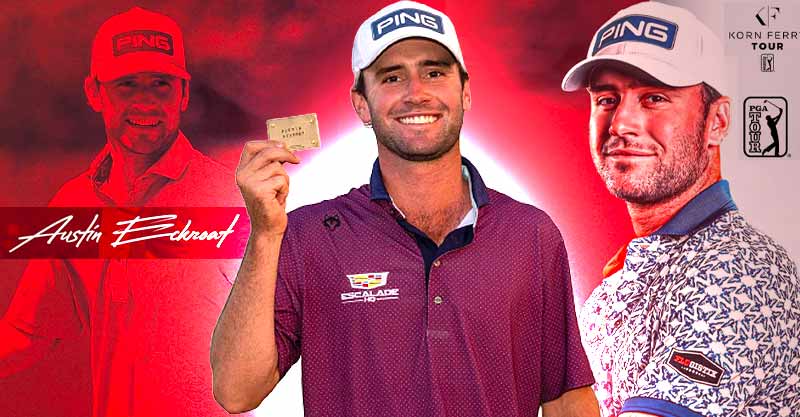 For all of you golfers out there baffled by the mysterious nature of this crazy game that can seem so easy one minute and impossible the next, take comfort in that it’s the same, to some degree, for players at every skill level.

“It is a strange game. One swing can change everything,” said Austin Eckroat of Edmond, just two days since earning his 2022-23 PGA Tour card with a second-place finish in the Korn Ferry Tour Championship Sunday at Victoria National Golf Club in Newburgh, Ind.

The 19-under-par performance, second only to Justin Suh at 21-under, lifted Eckroat from a tie for 67th all the way into third place in the three-event Korn Ferry Tour Finals. The top 25 earned their PGA Tour cards. The previous week he had shot 9-over, worse than all but one player in the entire field at the Nationwide Children’s Hospital Championship in Columbus, Ohio.

After missing the cut, Eckroat returned home to Edmond. With his home course Oak Tree National closed for green repairs, he took it easy and got his mind and body refreshed. Still he had limited expectations for the third and final event, considering his status in 67th place.

“I wasn’t feeling like I was going to go tear it up,” he said. “I had played so much golf the last month and I just kind of got worn out. But I started hitting it really well and that’s golf. You’re always just one swing away from something clicking in

“I finished second this week but I feel like I won. Getting the PGA Tour card means everything to me.”

Eckroat played the final round with his college teammate at Oklahoma State Sam Stevens, who finished tied for 12th at 15-under, which moved him into 21st place in the standings and earned his PGA Tour card as well.

The two became the third and fourth players from the 2018 national championship team at OSU to earn their tour cards, with Viktor Hovland and Matthew Wolff experiencing immediate success on the PGA Tour. Others from that team still chasing the dream include Kristoffer Ventura, Hayden Wood, Zach Bauchou and Brendon Jelley. Ventura played the PGA Tour in 2021.

“I knew Matthew and Viktor were a step ahead of me at OSU, but I also knew it was a step I could make,” Eckroat said. “The immediate success that they had gave me confidence that if I just improved that one step, I could have that success as well.”

That last step for Eckroat was improving his chipping to an elite level. Too often in the past, if his ball striking struggled he could not turn a 75 into a 71 by getting up-and-down with regularity. Now, after intense work he said he feels comfortable he’s prepared for immediate success on the PGA Tour.

After his senior year at OSU Eckroat had earned eight starts on the Korn Ferry Tour through PGA Tour University, but elected to forego most of those to chase immediate eligibility through exemptions into PGA Tour events. He said he finished one stroke from playing his way into the KFT Finals in 2021 by finishing in the top 200, but that also left him with limited status for 2022.

By the convoluted PGA Tour eligibility rules, Eckroat faced the necessity of finishing in the top 25 four weeks in succession earlier this year in order to keep his status for the remainder of the year. He finished tied for 23, 23, 25 and 25 in those four events, keeping the dream alive.

Eckroat burst on the scene in Oklahoma junior golf circles by winning the Class 6A state championship at Karsten Creek as a 14-year-old freshman at Edmond North. He won it again as a senior, then was a four-time All-American at Oklahoma State, won two collegiate events and played on the U.S. Palmer Cup team in 2019 and the Walker Cup team in 2021.

“It’s crazy how good Oklahoma golf is,” Eckroat said. “It really doesn’t make sense, because out weather is not that great. But maybe that’s what makes everyone so good.”

Eckroat said he’s followed all the changes LIV has brought to the PGA Tour and said it is a good year to earn a card considering the impending changes to qualifying coming up in 2023. This was the final year for the Korn Ferry Tour finals, as one example. Beginning next year the KFT will award 30 spots but all other spots will be awarded in PGA Tour Qualifying School, where as this year there were a combined 50 spots awarded between the KFT regular season and the Finals.

“My dream has always been to play the PGA Tour and that starts with having a good fall and earning some points toward all the elevated events,” Eckroat said.