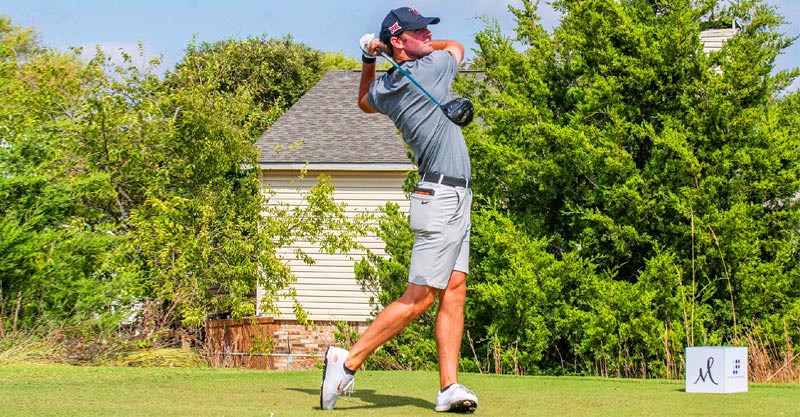 CAROLLTON, Texas – Oklahoma State’s men’s golf team carded the low round of the day at the Maridoe Collegiate Invitational on Monday to climb four spots into the top position after two rounds at Maridoe Golf Club. The University of Oklahoma also improved Monday, but was only able to jump from eighth to seventh.

Junior Austin Eckroat led the Cowboys’ charge up the board, firing a 3-under 69 to move into a tie for third place. He will begin his final round four shots off the pace of Kansas’ Luke Kluver. Eckroat stood at 2-over par through three holes before tallying birdies at the fifth and sixth to get back to level for the day. After posting a birdie at the eighth, he made the turn in 1-under 35.

Eckroat posted five consecutive pars to begin his inward nine before tacking on birdies at the 15th and 18th. He stands at 144 for the tournament.

Freshman Bo Jin shaved four shots off his opening 76 with a 72 during his second round to move into a tie for 13th place at 148.

Freshman Brian Stark posted a 72 as well after opening with a 77 to come in one shot back of Jin at 149 and tied for 18th place.

Oklahoma State will begin its final round tomorrow at 10:20 a.m. and will be grouped with Texas, Pepperdine and Baylor.

Oklahoma fired a second-round score of 6-over 294 to move into seventh place.  Redshirt senior Quade Cummins paced the Sooners, shooting a 2-under 70 to move up over 20 spots into a tie for 18th.

“We just haven’t done a great job this week controlling our golf ball around Maridoe,” OU coach Ryan Hybl said. “Our guys are feeling good about their game and we’ll do better tomorrow to close this one out.”

After failing to sink a birdie in Sunday’s opening round, Cummins responded on Monday’s front nine by shooting a 4-under 32 with no bogeys. His back nine featured a pair of birdies and bogeys, and a double-bogey on No. 17 moved the All-American to 2-under for the day.

Redshirt senior Thomas Johnson competed as an individual and continued to shine on Monday. The Norman, Okla., product will head into the final round in a tie for seventh after shooting a pair of 73s (+1) in the first two rounds. He currently leads the field in par-five scoring, shooting an average of 4.50 on Maridoe’s par-five holes. Johnson is looking for his first top-10 finish since a T6 placement at the 2019 Gopher Invitational.

Oklahoma juniors Logan McAllister and Patrick Welch are tied on the leaderboard in 28th after Welch shot a 73 and McAllister tallied a 76 on Monday.

Welch, a junior from Rhode Island, finished his round strong, collecting a pair of birdies on his final three holes. His seven birdies lead the Sooners and are tied for the fifth most in the field.

Just one stroke off the pair of juniors is redshirt senior Jonathan Brightwell, whose even-par on the back nine moved him to 9-over at the event and into a tie for 36th.

Freshman Ben Lorenz continued to play well in his Oklahoma debut. The Peoria, Ariz., native ended his day in a tie for 22nd after shooting a 2-over 74 on Monday afternoon.

With 18 holes of play remaining, the seventh-place Sooners are nine strokes off third place. Oklahoma’s 6-over 294 on Monday was tied for the second-lowest round in the field.

The Sooners will conclude their tournament on Tuesday afternoon before turning their focus to next week’s East Lake Cup in Atlanta.