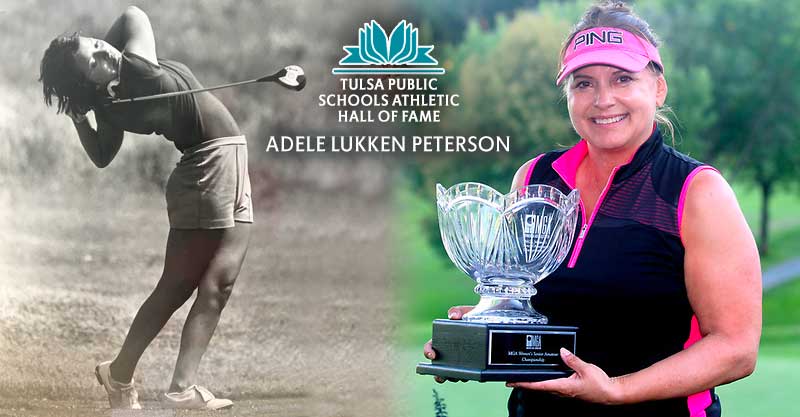 Adele Lukken Peterson was the youngest member of her golf gang, a group of young ladies that would hop in a car and take off, whether to far-flung destinations in Oklahoma or beyond, looking for a game.

Young, fearless, and sometimes directionally challenged. One trip to play in Lawton wound up with the girls being remonstrated at the gates of Fort Sill Army Base. But once they found the course, it was on.

Janice Burba (Gibson), Patty McGraw (Coatney), Janet Groene (Miller) and Peterson were the mainstays. Gibson, who went on to play on the LPGA Tour, and Coatney, who won the Women’s Oklahoma Golf Association State Amateur Championship a record nine times, are in the Oklahoma Golf Hall of Fame. Miller is a four-time state amateur runner-up, including last year.

Peterson was an All-American at the University of Tulsa in 1986, played on the LPGA Tour and, after retiring to raise her family of four children, recently began playing competitively again. She went out and won the Minnesota Golf Association Senior Women’s Amateur Championship in 2020 to mark her return to the game.

On Thursday night, Peterson will be inducted into the Tulsa Public Schools Athletics Hall of Fame on the strength of winning state titles for Edison in 1980 and 1981. But the truth is, that was the infancy of the Oklahoma Secondary School Activities Association even holding a girls championship and there were no regular-season matches or tournaments. All four of these women practiced and played on their boys teams and any regular-season tournaments they played in meant they had beaten out a boy for one of the five playing spots.

The summer months offered the WOGA Junior and State Amateur. Any other events, whether USGA, Trans-Miss or otherwise, meant piling in a car and hitting the road.

“That was a very fun time,” Peterson said Wednesday from her home in Minnesota. She is unable to attend the induction due to an explosion and subsequent fire in her garage earlier this week. The battery on her automatic push cart exploded. Fortunately no one was hurt and damage was limited. Gibson will accept on her behalf.

“We didn’t have a high school team per se, but every day we would go out and practice with the boys,” Peterson said. “If you beat them, it would be somewhat humiliating for them. We had Will Richardson, Pete Glass, Fred Daniel, Jim Lucius, Larry Lewis, a great bunch of guys on the team.

“In the summer we would travel to tournaments. I was just 13 or 14 when this started, but I think Patty had her license and we would just go. What a great time.”

Peterson finished second three times in the WOGA State Amateur, all to future Oklahoma Golf Hall of Famers in Coatney (1979 at Twin Hills CC), Lee Ann Hammack (Fairlie) in 1981 at Muskogee CC and Melissa McNamara (Luellen) in 1983 at Dornick Hills CC in Ardmore.

“We had so much fun,” Gibson said. “We were all good friends. When the tournaments started, we all wanted to beat each other. We were all competitive and could all play. And I think that’s still true today.”

After high school, Adele followed her sister to Southern Methodist, but soon saw that the coach was not going to put her on a full scholarship. Feeling bad for her parents paying the heavy tuition, she quit school after two years and returned to Tulsa, where coaching legend Dale McNamara offered her a chance as a walk-on.

She did that and after one semester earned a scholarship. She went on to record 22 top-15 finishes in 32 events over the next three years, including helping TU to three top-six NCAA finishes and she finished ninth individually in the 1985 NCAA Championship.

She played on the LPGA Tour from 1986-93, where she met Ping rep Mike Peterson. The two were married and moved first to Ping’s home in Arizona, but Peterson later became the rep for Minnesota and the two have raised their family of three daughters and a son ranging in ages from 22 to 30 in the Minneapolis suburb of Eden Prairie.

If Petersen was a young golfer today, she might be world famous through Instagram. Her striking good looks resulted in her being named Miss Golf by Golf Digest, an award she characterized as a beauty contest. She also had a rabid following in Japan where she posed for golf calendars during her LPGA Tour career.

Peterson promises to come home soon and get together with her gang, pile in a car and go play some golf. If you see them coming, put your wallet away.

The TPS Athletics Hall of Fame induction is at 6:30 p.m. at the Doubletree Hotel at Warren Place. Tickets are available at the door.