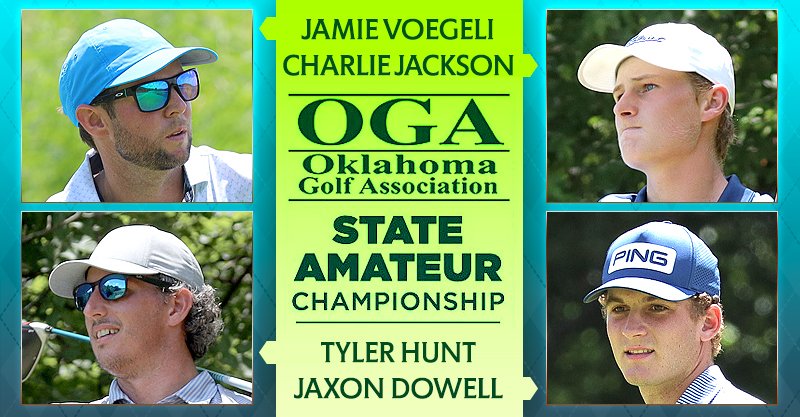 OWASSO – The word unprecedented has been used a lot this summer, but it certainly applies to the day Tyler Hunt experienced Wednesday at The Patriot in the Oklahoma Golf Association State Amateur Championship.

Hunt, 33 and a member at Cedar Ridge Country Club in Broken Arrow, struck a blow for the mid-amateurs who once dominated this event, knocking off defending champion Jordan Wilson of Edmond 2 and 1 in the round of 16, then defeating Oral Roberts University golfer and home course favorite Jared Strathe of Owasso 1 up in the quarterfinals.

That earned him a semifinal berth against Charlie Jackson of Norman. Jackson, who completed his high school career at Norman North and has signed with Abilene Christian, outlasted Carson Blaser of Edmond in 19 holes in the morning, then turned on the jets in a 6 and 5 romp over Harley Abrams of Tulsa in the quarterfinals. Jackson poured in seven birdies against one bogey in 13 holes against Abrams.

The other semifinal will pit Jaxon Dowell of Edmond against Jamie Voegeli of Tulsa. Dowell, one of the pre-tournament favorites and bound for the University of Oklahoma this fall, edged good friend James Roller of Jenks 2 and 1 in the morning, then held off Christian McAllister of Oklahoma City 1 up in the afternoon.

Voegeli, another mid-am who in 2017 teamed with Hunt to win the Tulsa Golf Association Four-Ball Championship, could square off against his partner for a much bigger prize if both can get past their younger opponents in the Thursday morning semifinals. The championship match will begin some 30 minutes after the conclusion of the second semifinal.

Hunt said he had never advanced past the first round of match play but he was on fire early against Wilson, the Oklahoma State commit and 2018 Class 6A state champion for Edmond North, who helped him by hitting a couple of shots into the tall grass bordering the wide fairways at The Patriot. Both players were sharp on the back nine but Hunt made a two-putt birdie on the par-5 16th to move to 2 up, then closed it out when Wilson missed about a 17-foot birdie putt on the par-3 17th.

Strathe jumped out to a 3 up lead after five holes in afternoon match, but Hunt clawed back. He birdied the 250-yard par-3 ninth to get within two, then finally tied the match with a two-putt birdie on the par-5 15th after a mighty 3-wood second shot from over 270 yards.

Hunt first pulled an iron to lay up, but then went back for the fairway wood, causing his father, long-time competitive golfer Richard Hunt, to tell this reporter, “Well, he’s about to win it lose it right here.”

Win it was the answer. Strathe, after a brilliant drive, left his second shot short, then could not get up-and-down. After halving 16 and 17, the match went into the par-4 18th even.

Strathe hit his tee shot right into tall weeds and had to punch out. Needing to take dead aim from 142 yards and with Hunt in great position off the tee, he hit a wedge that basically landed in the hole on the fly, rattled hard and popped back out to about 12 feet below the hole.

Hunt left himself about a 30-foot birdie putt which he rolled 4-feet past the cut. After Strathe left his par effort just a few frustrating inches short, Hunt rolled in the knee-knocker for par and the match.

“I couldn’t believe it when he hit the flag on that third shot,” Hunt said. “But I could see it rolled back far enough that it wasn’t an easy putt. I was hoping if I could just get it on and two-putt that would do it.”

Voegeli trailed Wichita State golfer Glenn by three holes after eight, but won holes nine, 10 and 12 to close within one. But that was just a warmup for the fireworks to come.

On holes 12-14, Voegeli went birdie-ace-birdie, the hole in one coming on the par-3 13th, for a three-hole stretch of 4-under, giving him a two-hole lead. But Glenn fought back with consecutive birdies on 15 and 16 and a par to Voegli’s bogey on 17, tying the match going into 18. Voegeli made a par there and Glenn a bogey for the 1 up victory.