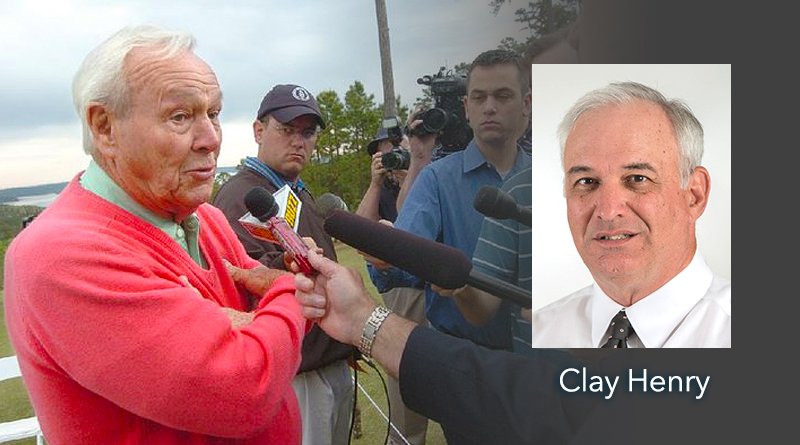 Editor’s note: Below is a column I have brazenly swiped (with permission) from the website of Whole Hog Sports, written by former Tulsa World sportswriter and once fellow golf writer Clay Henry, now the executive editor and publisher of Hawgs Illustrated. Clay looks back at his favorite golf memories and Oklahomans such as Hugh Edgmon, Dean Blevins and Robert O Smith play prominent roles, as do Pete Dye and Arnold Palmer. Apparently the time we won a media event at the Golf Club of Oklahoma by eight shots wasn’t good enough to make the cut. Enjoy. – Ken MacLeod There are fishing columns to be written in the next few weeks with organized sports on hold. But I have heard from more than a few who say I’ve got to hit other sports, too.

There will be time to cover lots of personal history, but it hit me as I was listening to a repeat show on PGA Tour Radio that golf is part of my heritage, too.

Before I became a fly fisherman, I was an avid golfer with a history both playing and writing about that sport.

Why not write about my three favorite golf days?

The first was just one year after earning captain status for the 1975 University of Central Arkansas golf team. Low man in the conference meet got you named captain at my school. I didn’t know that until I read a yearbook caption under my picture.
It was in the spring of the following year when Conway Log Cabin Democrat owner Frank Robbins gave thumbs up when I asked if I could pay my own way to cover the Masters, riding with my father Orville Henry, covering for the Arkansas Gazette.

Ray Floyd beat Ben Crenshaw by eight strokes for the 1976 Masters championship. I recall the way he crushed the field on the par fives for the week, mostly because of an accurate No. 5 wood.

But the only thing that really matters is that both my father and I drew winning numbers for the Monday lottery among media members covering the tournament. We were among 40 who played the course.

We took our clubs just in case. We didn’t find out we were playing until early Monday morning as we were packing the car at the Holiday Inn.

Maybe we got some help from Jack Stephens, my dad’s close friend. That was well before Stephens became chairman at Augusta National, but he did have a huge influence by then.

Stephens drove a cart onto the course in the middle of the round to watch us play a few shots. So he knew we’d been picked, or maybe we never were in the lottery in the first place.

The way that media round works, you get Augusta National caddies and play the members tees. The greens aren’t mowed and the pins are the same as on Sunday.

My father went to the club pro while we were warming up to ask if he’d watch me hit a few shots on the range to get clearance to play the tournament tees. I had the length, the pro said.

I was required to hole out first on every green, then move quickly to the next tee and hit my drive. That way we’d be at the member’s tee when the other part of our foursome arrived.

That decision probably kept me from breaking 80, but I’d do it the same if I got another chance. Playing the course the same way Floyd did was a pleasant surprise.

There were several highlights. There was a birdie at the par-5 eighth after a wedge shot to 10 feet. There was an up-and-down at No. 9 from behind the green. My caddie said no one manages that “except Seve Ballesteros.” I didn’t hear that quote, but my dad did and told me later.

The caddie helped me on several difficult reads, including a par putt at No. 5 when I was sure he asked me to aim downhill. No one without a local caddie gets that read right.

The front nine went smooth. I turned in 38 and began to think about breaking 80. I probably could have except for second-shot gambles at the 13th and 15th, the reachable par fives.

Of course, they probably wouldn’t have been risky shots had I played from the member’s tees. From the tips, I couldn’t get there.

“From what I’ve seen from you so far and on the range, I don’t think you can clear the creek,” the caddie said. “But take this brassie and give it a go. You’ll never be here again.”

The other three in the group had already hit irons short of the creek. Almost in unison, they said, “Go for it!”

I hit a solid shot with my No. 2 wood and it hit 10 yards short and bounced into the creek. I made a double bogey.

Two holes later, I hit my best drive, a hook that bounded forward off the mounds on the right side of the 15th fairway.

As we walked up to the front tee to meet my group, the caddie said, “My man busted it. He’s going to have a go at this one, too.”

We walked the fairway discussing the merits of another gamble. My dad was keeping the scorecard.

I beat my caddie to what clearly was his favorite line to Augusta National guests. Loudly, I said, “I’m never going to be here again. It’s more than I got in the tank, but give me the brassie.” My playing partners – especially my dad – were all for it.

I crushed it, a high, soaring shot. It’s severely downhill and a beautiful vista with the ball in the air. We all thought it had a chance. But it landed about 10 yards short. Kerplunk. There was another double bogey.

There were pars at the next two, then a drive into the fairway bunker at No. 18. I couldn’t clear the lip with the club it took to reach the green and was well short of the green. I two-putted for bogey and 81.

I covered the Masters several times as the golf writer for the Tulsa World, when I wrote a weekly golf column, but never played again. My summers were spent traveling the Oklahoma golf circuit, often covering state amateurs and the Oklahoma Open at the three courses at Oak Tree in Edmond. Often, I’d spend a full week at Oak Tree.

The key to this part of the column was a friendship developed with Hugh Edgmon, the former president of Oak Tree. I’m sure he controlled the pairings for the media play day ahead of the 1988 PGA Championship at Oak Tree, or at least the featured groups.

I rode in the same cart with the late Pete Dye, the architect for all three courses at Oak Tree. Also in our group was PGA Executive Director Jim Awtrey, and Robert O. Smith, a rules expert and then pro at the University of Oklahoma Golf Course.

It was the pairing that day, off No. 1 for the shot gun start. Playing from the up tees, I fashioned a 76 with lots of tee shots with my favorite club at that time, my No. 1 iron. I would have needed a driver if we had played closer to the tournament tees, a fact Dye later emphasized as we checked the scorecard.

We were asked for a handicap when we committed to play. Most media guys don’t play enough to even have one. Only a few produced USGA handicap cards. I did not either, but didn’t feel badly about claiming to be a 7. No one questioned it before the round.

They had prizes for the low net and the low gross, two Oak Tree logo wrist watches. We all looked at them on a table as we headed to the course. I don’t recall sweeter prizes for a media tournament.

When the scores were posted, it was obvious that no one was really close to me, net or gross. I knew I’d won a watch, but who would get the other men’s watch? Both of the second-place finishers were hopeful.

It was obvious that something unusual was happening when Dye, sitting at my table, left to confer with Edgmon. He came back beaming. I later found out that he suggested to Edgmon to swap out the second men’s watch with a more expensive women’s watch with gaudy gold nuggets.

There were moans of protest from my colleagues when Hugh called me up for my prize and handed me a second watch for my wife, courtesy of Dye.

Good friend Dean Blevins, then a TV sports anchor in Tulsa, protested the decision, then hugged me. I recall that Dean was not far back in the race for low gross, maybe with a 79. He was then club champ at Oaks CC in Tulsa.

That media day at Oak Tree was fun, but Edgmon topped it about two weeks later when the pros came to town for the PGA Championship. Arnold Palmer was playing, although not a threat to win the only major that eluded him. He didn’t even make it to town in time for a practice round, flying in on his private jet after dark on Wednesday.

Palmer was busier building golf courses than playing tournament golf. He still created a buzz in the media room Thursday morning just ahead of his tee time when it was clear that he was on property. Edgmon came to my seat in the media room with a question.

“Do you want to interview Arnie?” he said. “I think he’ll talk to you for a few minutes before he goes to the practice range for a warm up.”

It’s hard to beat a round at Augusta National with my father or winning two Oak Tree logo watches in one day, but my time with Palmer is still my favorite golf memory.