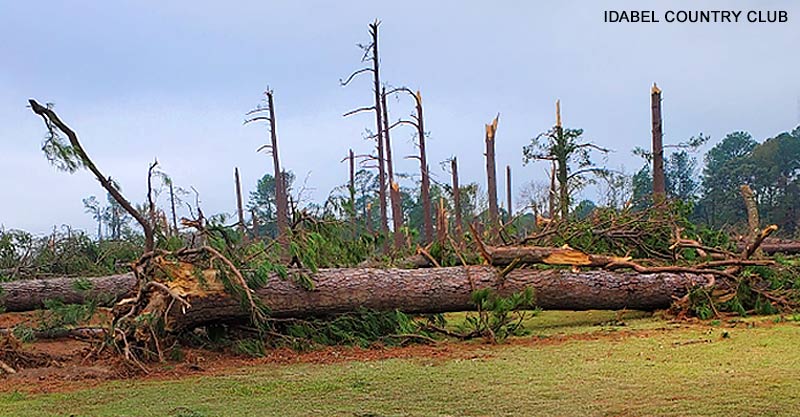 The front nine of Idabel Country Club could be closed for up to a year after taking a direct hit from the F-4 tornado that roared through the southeastern Oklahoma own of 7,000 residents Friday evening, damaging or destroying at least 185 buildings and leaving dozens of residents homeless.

Lee Ardwin, course superintendent who has worked in various maintenance capacities at the course for over 20 years, said that at least 700 trees were toppled or ripped apart as the tornado advanced through the course. The clubhouse was impacted but not directly as were the cart barns.

Tree damage was also significant on the back nine holes but not close to the extent on the front nine. Ardwin said he expected the back nine could reopen within two weeks.

For now, Ardwin and club officials are communicating with the Federal Emergency Management Agency (FEMA) and the course’s insurance carriers on the best way to proceed with cleanup.

“It just demolished the front nine,” Ardwin said. “Everything is gone. Every tree. The only thing left on a lot of them is a small part of the trunk.”

Idabel Country Club opened in 1974 and the back nine was added in 1998. It serves golfers in Idabel and surrounding communities in McCurtain County and also is enjoyed by the rapidly growing tourism sector in southeastern Oklahoma.