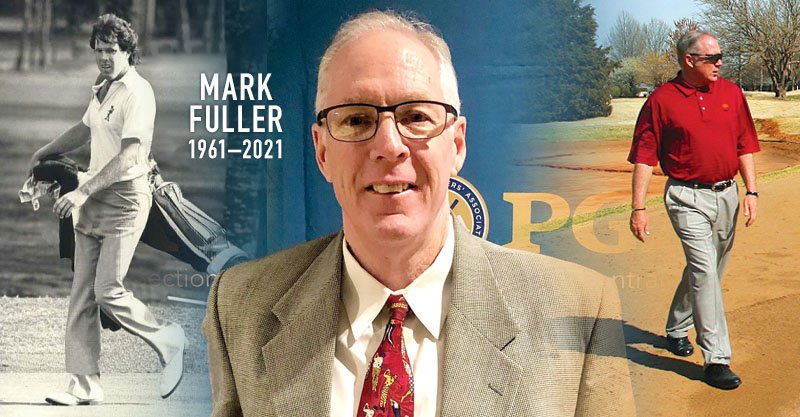 Nantz, Elkington among those paying tribute

Mark Fuller, long-time PGA golf professional in Oklahoma and one of the best competitors in the PGA South Central Section for decades, passed away early today, Oct.  21, after a three-year battle with cancer. He was 60.

Fuller, who was the Director of Golf at Surrey Hills Country Club in his hometown of Yukon when he was diagnosed in January of 2019, battled back from an original prognosis of only having a few months to live to playing tournament golf and qualifying for the 2019 PGA Senior Professional Championship at Barton Creek Resort near Austin, Texas.

“He never gave up and just persevered,” said Jeff Tucker, his fellow PGA professional who worked with Fuller at both Gaillardia Country Club (2013-14) and at Surrey Hills. “His attitude was always good and he fought hard. He was just a wonderful man who would do anything for you. A dear, dear friend and I loved him.”

Fuller grew up in Yukon and tied for sixth in the 1978 Class 4A state championship, He attended the University of Houston from 1980-83, where he was an All-American and as a junior a starter on the 1982 NCAA national championship team with such illustrious teammates as Steve Elkington, Billy Ray Brown and John Slaughter. Jim Nantz of CBS fame, Fred Couples and Blaine McAlllister were Houston teammates earlier in his career.

Elkington had kept in close touch with Fuller, encouraging him as he underwent extensive chemotherapy, radiation and other treatments. He said he had a feeling early today that he should text Fuller and got a return message that he had passed away.

“I just had a feeling this morning that I should get in touch,” Elkington said. “It’s kind of surreal. But we had been keeping in contact on a weekly basis and he had a great attitude. Amazing, really.”

Elkington said Fuller was the unofficial captain of the great Houston teams.

“He was the one kept everything together,” Elkington said.  “If we were a dog pack, he was the pack leader. He kept everyone in line and straight back to work. Being from Australia and new to everything, he was very important to me.”

The soundtrack for the team was dictated by Fuller’s love of the rock group Journey.

“In the dorms, in the van, Journey all the time,” Elkington said. “Faithfully, Don’t Stop Believing, all of that.”

Nantz said it was a heartbreaking day for the fraternity of Houston players who still keep in contact.

“It’s a very sad day for all of us who treasured Mark’s friendship,” Nantz said. ” He was a gifted player at Houston and was a vital member of national championship teams. I always believed he was a far better player than he realized. He was a humble man.

“I would always hear warm and wonderful comments from the Oklahoma State tour guys who knew him so well during all of his years serving as their club professional (at Oak Tree Country Club.). He just exuded class. ”

“Long before Tiger, dad said Houston red was the most intimidating color on the golf course,” said son and fellow professional Austen Fuller. “He loved those guys and talked about how they all worked together toward one common goal, winning national championships.”

While his game didn’t reach the heights of Couples or Elkington, Fuller was a tenacious competitor. He won numerous section titles (see graphic), played in 13 PGA Professional Championships and made the cut six times. In 1997 he finished tied for 17th at Pinehurst No. 8, qualifying for the PGA Championship at Winged Foot. He shot rounds of 79-84 and missed the cut, but it was a career highlight nonetheless and a favorite memory for Nantz.

“I can remember standing with pride behind the 18th tee in the second round and watching my old college buddy stripe a tee shot right down the middle,” Nantz said. “I was thrilled to see him competing in a golf major.”

Fuller was diagnosed in late January 2019, with a gastrointestinal stromal tumor (GIST) on his liver. The cancer was eating away at his right hip bone, which required an eight-inch nail to secure the hip to his femur. He underwent chemotherapy and radiation to reduce the tumor, which had caused massive swelling in his feet, legs and other sensitive areas.

The surgery to repair the hip led to a blood clot in his lung. Fuller was treated both in Oklahoma City and at the M.D. Anderson Cancer Treatment Center in Houston. During recovery, he read the story of Oklahoma State fan Joe Tippens, who used a canine dewormer medicine called Panacur C to help him stage a remarkable recovery from small cell lung cancer when doctors had expected him to live for no more than a few months. Fuller credited the medicine with helping him recover enough to resume his playing and working careers, but cancer is a implacable foe.

In July of 2019, Fuller made an inspiring return to competitive golf at the South Central Section PGA Professional Championship at the Patriot in Owasso, shooting 73 in the first round with 17 pars and a bogey. He later qualified for the 2019 Senior Professional Championship at Barton Creek, where he shot 80 the first round but bounced back with a 68.

Fuller continued to compete right to the end, having played in a section event Oct. 11 in El Dorado, Ark. He returned on Oct. 12 to find the effort had led to four cracked ribs, and was taken to the emergency room last Thursday. His condition deteriorated this week and he passed away peacefully with his family at his side early this morning.

Fuller worked for the past 18 months as an assistant professional at River Oaks Country Club.

River Oaks member Ainslie Stanford, whose son by the same name played on the PGA Jr. Golf team that placed third in the national championships in Scottsdale, was impressed by Fuller’s caring and uncomplaining demeanor at the club.

“I did not know he was fighting cancer for many, many months, and it was not until someone else told me,” Stanford said. “I will never forget the kindness and generosity, and just downright friendliness he constantly showed to my son Ainslie around the club, all the while struggling and fighting cancer, and never saying a word about it, unless absolutely pressed to answer questions about it. He was literally as kind and encouraging as a human being could be to an 11-year old, and I’m still just blown away by it.”

Son Austen joined him on the River Oaks staff in May and they were able to spend much time together in his final months.

“I loved working with him,” Austen said. “I got to see his vision and values and how he sets goals and operates in the golf industry. It was very helpful to me.

“I am in the golf business because of him. He is my hero and I really appreciate all the things I’ve learned from him and how he’s raised me.”

The two played 27 holes together at Shangri-La in early September, their last of many cherished father-son matches over the years. In their last competitive event together, the Oklahoma Eastern Chapter Championship at Twin Hills Golf & Country Club, the dad shot 77 and the son 78.

Mark’s working career included stops at the head professional at Oak Tree Country Club from 2000 to 2013, Gaillardia Country Club from 2013-14 and The Golf Cub at Surrey Hills from 2014-2000. Each of those three positions ended when new ownership took over the clubs and wanted to install their own pros.

“Dad was working a 40-hour a week schedule right to the end,” Austen said. “He didn’t always feel the best but he came in and tried not to let if affect him.”

Services for Mark will be at 10 a.m. Monday, Oct. 25 at Holy Trinity Lutheran Church in Edmond.