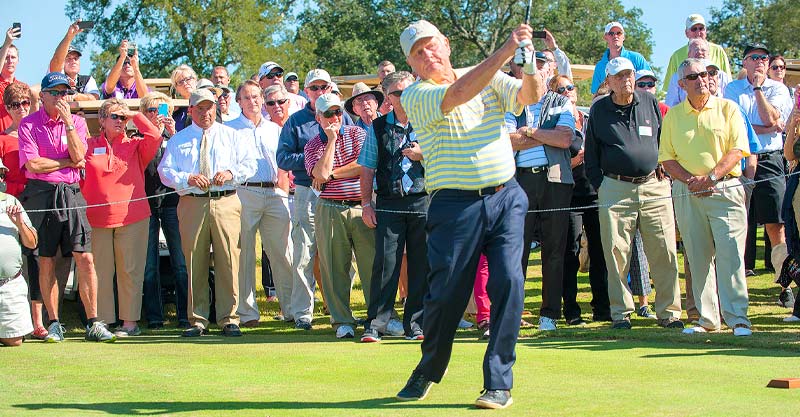 The Life And Career Of Golfing Legend Jack Nicklaus

The Golden Bear was such a successful golfer 30 years ago that people still can’t stop talking about him today.

Jack Nicklaus (the Golden Bear) is the most successful American golfer of all time. Tiger Woods is the only player who has come close to breaking some of his records.

Nicklaus played in a golden era of golf and was well known for his friendly rivalry with fellow American and best friend Arnold Palmer.

Today, we are going to take a closer look at the record-breaking life and career of Jack Nicklaus – one of the all-time greats.

Nicklaus was born in Columbus, Ohio and his father was a pharmacist. Nicklaus intended to follow in his father’s footsteps.

When Nicklaus’s dad was younger he played tennis, golf, and football for his high school. He even played semi-professionally for the Portsmouth Spartans (now known as the Detroit Lions). He sadly died from cancer at age 56.

Jack was also incredibly sporty in high school – he played football, baseball, tennis, and track & field for his high school. He also played in the school basketball team and was offered multiple basketball college scholarships.

However, it was in the sport of golf that Nicklaus showed a real aptitude. When playing golf with his father at age 10, Nicklaus scored 51 in his first-ever 9 hole game. His father had started playing golf while recovering from an injury and the pair quickly caught the attention of Pro Jack Grout.

Nicklaus trained with Grout for the majority of his life, until Grout passed away. Nicklaus contracted Polio at age 13 but recovered and suffered little to no long-term issues.

He won 5 Ohio State Junior titles in a row from age 12-17. In the second OSJ tournament, he broke 70 and became the youngest player to ever qualify for the U.S Junior Open. The next year he won the Tri-State High School Championship with 68 and his first tournament hole in one.

At age 15, he scored 66 at his club and qualified for the U.S Amateur Open for the first time. This was a club amateur record at the time. In the same year, he won the Ohio Open with a score of 64 – he was playing against adult professionals at this tournament. This would be the first of 117 professional tournament wins for Nicklaus.

Nicklaus went to Ohio State to study pharmacy. He was intending to take over his father’s business. While he was at college, he won the U.S. Amateur twice (1959, 1961), and an NCAA Championship (1961).

He played in the 1960 U.S Open as a college amateur – he finished 2 under par and came second in the tournament. He was beaten by Arnold Palmer – this was the first time they played together and they later became best friends.

It was at this time that Nicklaus met his wife, Barbara Bash, they were married in 1960 and had their first child in 1961. It was the birth of his first of five children that convinced him to go Pro. Jack and Barbara are still together – both are 82.

Nicklaus officially turned Pro in 1961. However, it took him 17 PGA tournament starts before he won one.

His first professional victory was at the U.S Open in 1962 – this would be the first Major win of 18 for him. And the first of 4 US Open wins.

During his career, Nicklaus won 73 PGA Tour titles, 9 European Tour titles, and 3 PGA Tour of Australasia titles. He also went on to win 10 titles on the Senior PGA Tour.

Nicklaus won the Masters 6 times, the U.S Open 4 times, the PGA Championship 5 times, and the Open Championship 3 times. He was the youngest player ever to win all 4 Major titles, he did this at age 26.

You can find the best golf odds on the upcoming Majors here.

Nicklaus played in the Ryder Cup 27 times and had a 16-8-3 (win-loss-halves) record. He was also Captain of the US Team twice.

In 2021, the Ryder Cup introduced a new award called the Nicklaus-Jacklin award. It is to be given to the player that most captures the spirit of golf in the tournament. The award recognizes skills, teamwork, and general attitude – both European and American players can win the award.

After retiring from golf, Nicklaus moved into the world of course design – something that his close friend Arnold Palmer was also very passionate about.