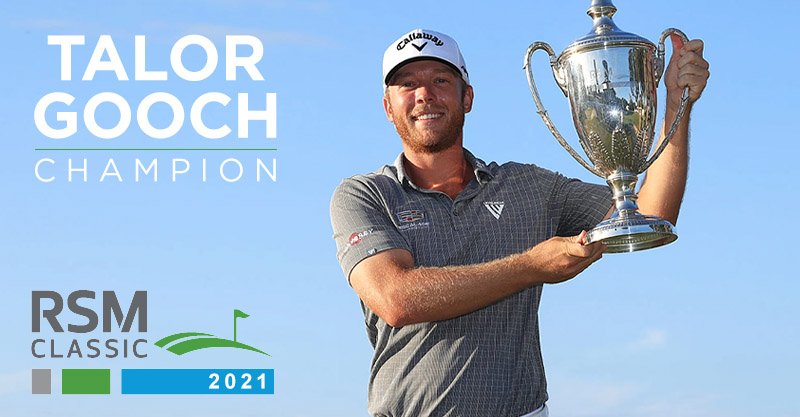 Midwest City’s Talor Gooch rolled to his first PGA Tour victory at the RSM Classic in Sea Island, GA, Sunday. Gooch, who recently turned 30, did so in dominant fashion, shooting 6-under par in the final round to finish at 22-under, tying a tournament record and defeating Mackenzie Hughes by three shots.

It may have been his first win in 104 events, but Gooch plans on many more. He raised some eyebrows last week when he declared he wanted to be the best player on tour from Oklahoma State, meaning watch out Viktor Hovland and Matthew Wolff. On Tuesday, joining the hosts of the 73rd Hole Podcast, he went one better.

Asked how the victory, which comes with an automatic appearance in The Masters and ensures his spot in the 2022 PGA Championship at Southern Hills, would change his goals for 2022, Gooch said not at all.

“I want to be the No. 1 player in the world,” Gooch said. “I need to keep a short-term focus on getting better every day and working towards that.”

Gooch may just be becoming a household name to fans, but his fellow competitors are aware of his recent track record. . Gooch has finished top 11 in five out of his last six events. Adding a win to his consistency has landed him at 33rd in the world and No. 1 in the FedEx Cup standings heading into the fall break.

The victory also landed him at 33rd in the world rankings, which means he will be able to pick his schedule for 2022, as well as earning him a spot in all of the WGC’s and major championships. When asked when he realized that he will be going to Augusta National for the Masters in April, Gooch responded, “I was thinking about it the whole time I was in the thick of it. You kind of say to yourself Augusta is on the line.”

The win allows Gooch and coaches Boyd Summerhays and Steve Ball to go into the offseason with time to work on details knowing his game is solid. He also is looking forward to having some quality time at home for a few weeks with his wife and newborn daughter.

Gooch  was the second consecutive Oklahoman to win the RSM Classic, as Robert Streb was the defending champion. He was also the second Oklahoman to win on the PGA Tour in the last three weeks, with Hovland winning two weeks back and Kevin Tway finishing tied for second the week after.

Gooch loves being a key part of Oklahoma’s takeover of the PGA Tour and has no plans to move.

Other young Oklahoma players will be chasing him. Taylor Moore of Edmond had the best finish of his rookie season on Tour with a tie for eighth place at 14 under. Former Sooner Max McGreevy tied for 16th at 11 under. Oak Tree National member and PGA Tour rookie Josh Creel finished tied for 40th.

Gooch had much more to say about his career, life and expectations. Click here for the complete show and tune in each week to the 73rd Hole Podcast.