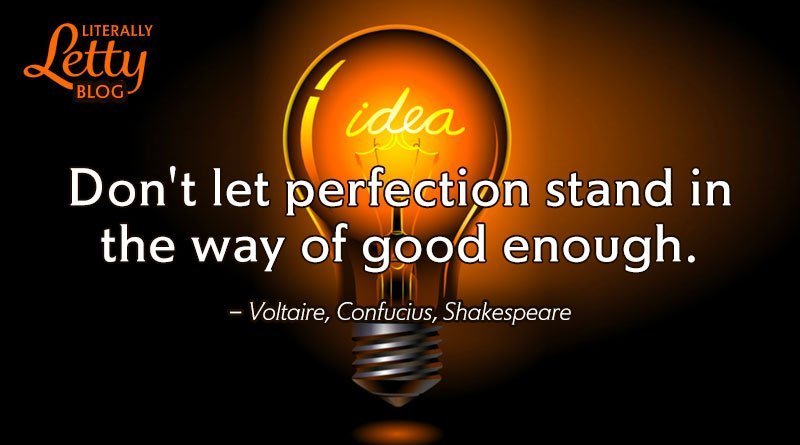 “Don’t let perfection stand in the way of good enough.”
From centuries of well-spoken thoughts by Voltaire, Confucius,
Shakespeare

This quote has been bouncing around in my brain for a couple of weeks, after it linked up with another random question about how the drive for perfectionism affects my golf shots, blogs, storytelling performances, and daily life.

Nine years ago when I began blogging my writing wasn’t perfect, and my stories and grammar still are not perfect. I realized that in my first few months of writing that IF I wrote/rewrote, then edited/reedited my hand would never push the ‘publish’ button and my blog would go empty.  By taking a deep breath I discovered I could hit the publish button. My purpose of writing the blog, originally, was to write stories that I could then tell in public for paid performances. A few years later, I felt like my stories contained value. Though not perfect they sounded good enough to me.

“Yesterday, as we walked, the muted fall leaves scurried like little mice across the streets, under our feet, around the corners, and down from above.  Still it was quiet and the animals in the neighborhood slept on. My mind, too, was quiet, until suddenly a yard sprinkler system came on full blast. Shivers crept up my wet side as I danced to the right and out into the center of the street. Lucy was faster and never a drop touched her fur.”

This story became stinkier the longer I walked that morning with Lucy, and it could most certainly stand a revision. If I had waited on perfection the story,  Dancing in the Breeze, might have been neglected and eventually forgotten due to time restraints and frustrations, and this delightful memory lost. In the last decade of playing golf, working out, going to physical therapy I discovered that I could not hit the ball with the efficiency and perfection I once knew; I could not work out as long as I demanded of myself; I could not

perform some of the exercises they gave me.  All of these could nots finally stung me with needles of anger and frustration. One day in early spring I began to say to myself “that shot wasn’t perfect but it sure didn’t hurt me (both literally and figuratively).”  I made a tally mark on my scorecard of the shot that was good enough.

In the beginning, I found myself critical of what constituted a ‘good enough’ shot. On a scale of 1-10 (think of Bo Derek) I expected a shot to be an 8,9,10 which correlated to 5-8 shots out of 45 being good enough.

“This is not a test,” I reminded myself. It is a game, a pleasant reminder of life. So…The next few rounds of golf became more relaxed and more tally marks appeared. Week by week I began to find more positive things about my golf score, and transferred that positivity to my work outs. Some of which I found that just finishing was good enough.

A close friend from years of teaching, writing, and performing designed a t-shirt for the OU/Texas game this year and gave them to several friends.  When she posted her design on Facebook she made the note: It’s not perfect but it is done.