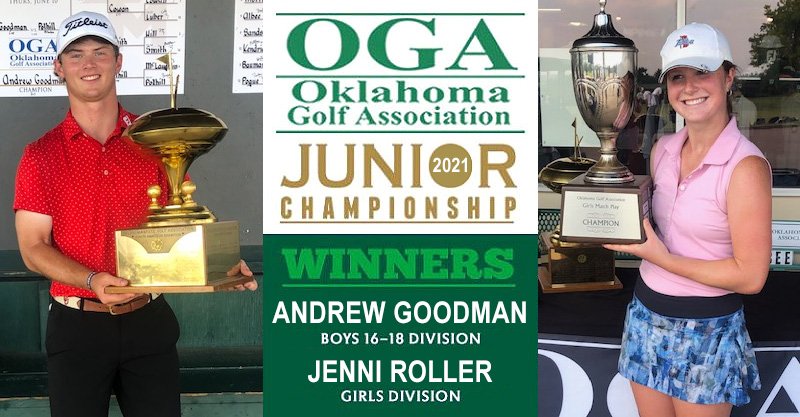 EDMOND – Andrew Goodman made sure his name would join the illustrious list of past champions on the Oklahoma Golf Association Junior Amateur Championship trophy, as the top-rated junior in Oklahoma defeated Bryant Polhill of Edmond 3 and 1 in the championship match Thursday at Kickingbird Golf Course.

In the girls bracket, Jenni Roller of Jenks won a scintillating match with Olivia Coit of Edmond 3 and 2 to become a part of the first brother-sister combo to win OGA Junior titles. Her brother James Roller knocked off Goodman in the 2020 finals and now plays for Texas Tech.

Goodman, of Norman, will be playing for Ryan Hybl’s Oklahoma Sooners in the fall and though he has many high-profile amateur events lined up this summer, he said winning this event was high on his priority list.

“It feels really good,” Goodman said. “I was really worried in my quarterfinal match (a 1 up victory over William Sides of Tulsa) that I wouldn’t even be getting past that. And it’s always good to play well in match play. That’s what we’ll be playing at the Natty (NCAA Championship), so it’s great to win all four matches.

Goodman led from the fourth hole on and was 2 up at the turn. Polhill, who will be a junior at Oklahoma Christian in the fall, won the par-3 11th to pull within one, but Goodman birdied the par-5 12th and the par-5 15th to pull ahead by three holes. He gave Polhill the par-3 16th when he hit his tee shot behind a tree short and left of the green, but then birdied the par-4 17th to close out the match.

Goodman said he was cheering wildly last week when the Sooners came up just short of the NCAA championship in the final match with Pepperdine. He looks forward to getting his chance to help in the fall.

Polhill reached the final match with a dramatic comeback against his OCS teammate Ryder Cowan. Down 3 with four holes to play, he finally tied it with a 30-foot birdie putt on the 18th hole, then won in a one-hole playoff. It was a rematch of the Boys 14-15 final in 2020 won by Cowan.

The girls championship match had the fireworks. Roller, a University of Tulsa commit, birdied the par-4 seventh and eight holes to go 3 up. Coit then played in the next three holes in 4-under par, making an eagle on the par-5 ninth, chipping in for birdie on the par-4 11th and hitting a beautiful tee shot on the par-3 11th to 10 feet for another birdie.

Roller said he wasn’t shook by Coit’s 4-under burst.

“I just figured that’s golf,” she said. “She chipped in and made some great shots, nothing I can do about it. So I just kept playing my game.”

“I didn’t even realize I had four birdies in a row,” she said. “I was just trying to play each shot and each hole. I love match play, it’s probably my favorite thing to do in golf. So I was pretty excited to win. And with JP winning last year that’s pretty cool.”

Roller defeated top-ranked and stroke play champion Maddie Kamas of Kingfisher 3 and 2 in the morning semifinals. Coit knocked off Raychel Nelke of Pocola 3 and 2.

The Rollers are a golf family. Mother Maggie Roller is the director of instruction at Cedar Ridge Country Club and father Bill was the long-time successful coach at Jenks High School.

The Boys 14-15 division was won by Grant Gudgel, a rising sophomore at Stillwater High School. He defeated Preston Albee, a freshman at Choctaw, 4 and 2 in the final.

Gudgel, who by happenstance played a round with mini-tour player Alexander Hughes at South Lakes in Jenks last year when Hughes shot a world-record tying 55, had his own magic going this week, playing solid in all four matches. Albee should have been worn out for the final. Not only did he play six rounds of competitive golf in blistering heat, but has played 11 basketball games since last weekend as his team sorts out its roster for the coming season.