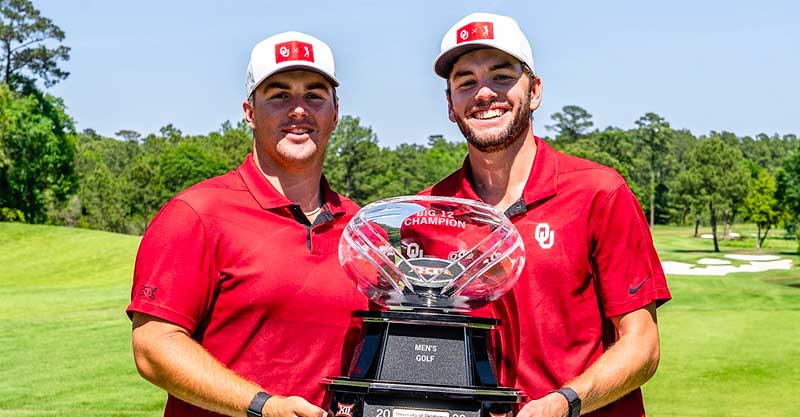 NORMAN – For just the second time in program history, a pair of Sooners have been named to the PING All-America First Team in the same season. Oklahoma men’s golf seniors Chris Gotterup and Logan McAllister earned first-team nods, the Golf Coaches Association of America announced following the conclusion of the NCAA Championships.

The two join the pair of Quade Cummins and Garett Reband in 2020 as the only other Sooner duo to earn first-team status in the same season. OU’s all-time All-America total now stands at 73, with 25 of them coming since head coach Ryan Hybl took over in 2009.

Gotterup, who became Oklahoma’s first Fred Haskins Award winner earlier in the week, earned the first first-team honor of his career after a third-team selection at Rutgers in 2020. The redshirt senior posted wins at the East Lake Cup and Puerto Rico Classic in his lone season with the Sooners. He also was responsible for 10 top-10 finishes in 2022 behind a school-record 28 rounds of par or less in a season. The product of Little Silver, N.J., sunk 145 birdies on the year, the second-highest total in program history, which led to a 69.83 scoring average, third-best in the school’s record book. He became the first Sooner ever to finish the season ranked No. 1 in the Golfstat and Golfweek/Sagarin polls after finishing tied for fifth at the national championship, one stroke behind the national champion. A finalist for the Jack Nicklaus National Player of the Year Award, Gotterup earned professional status through the PGA Tour U program and will begin his professional career this summer.

The first-team selection is McAllister’s first of his OU career after a third-team selection in 2021. As the OU career record holder for scoring average at 70.98 (-0.40), he is the only Sooner in history with a scoring average under par. His four career victories, including one in 2021-22 at the Carmel Cup, rank fourth all-time at OU behind Anthony Kim. He finished better than 87% of opponents during his final year in Norman, the fifth-highest winning percentage in school history. His 70.06 scoring average this season as a senior is good for the fourth-lowest ever in Norman. He finished inside the top five of the PGA Tour U rankings, earning status on the Korn Ferry Tour.

The two were co-captains of a Sooners’ squad that finished as the nation’s unanimous No. 1 team in the country, despite a quarterfinal exit in the NCAA Championships. The Sooners finished tied for first with Vanderbilt and North Carolina in the stroke-play portion of NCAAs and closed the year on top of the GCAA, Golfstat and Golfweek polls. In addition, the team won a school record-tying seven events, including the program’s 18th conference championship and advanced to a nation-leading sixth consecutive NCAA quarterfinal. The Sooners were one of two teams with two golfers on the PING first team joining Vanderbilt. The GCAA will announce the second-team and third-team All-Americans at a later date. Patrick Welch and Drew Goodman will both seek All-America status after being named PING All-Central Region last week.