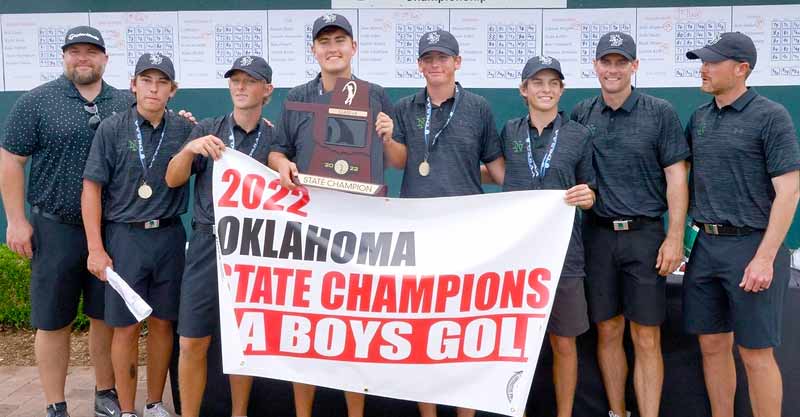 NORMAN – Grant Gudgel has witnessed the impossible and the unlikely in golf. He’s not afraid to create those moments for himself.

So maybe it was no surprise that he ignored brutally windy conditions to prevail in the Class 6A state championship as a sophomore against a field loaded with upper class talent, including future Oklahoma Sooner Jake Hopper of Norman North, whose 15-foot birdie putt helped his team win the first state title in school history in a playoff with perennial power and defending champion Edmond North.

Gudgel, now 16, was a by chance caddie in late August of 2020 when young Tulsa pro Zander Hughes shot a world-record tying 55 at South Lakes Golf Course in Jenks. Then he was a very much by intent caddie when his father Eric Gudgel defeated Mike Gotcher in July of 2021 to complete a magical week and win the Oklahoma Golf Association Senior State Amateur Championship at Meadowbrook Country Club.

Those were two improbably accomplishments, but Gudgel’s victory in 54 holes of windy golf at Jimmie Austin University of Oklahoma Golf Course may not have been. The wiry sophomore’s game has advanced considerably in the past two years and this spring he has won three high school tournaments and two Oklahoma Junior Golf Tour events.  His piercing ball flight is ideal for playing in the wind. While many of his competitors struggled, he shot rounds of 75-70-73 for a 2-over 218 and a three-shot victory over Norman North senior Leyton Kyle (71-76-74).

“It’s just really unbelievable,” Gudgel said. “I played in the Oklahoma Junior Masters at Southern Hills (Saturday) and didn’t play well, then wasn’t hitting it well on the range yesterday and didn’t have much confidence. But I just said let’s just go play some golf and have some fun. I scored well, short game was really good and just to come out on top is really amazing.” “My swing, I like to hit the ball low and hit a lot of stingers, so I don’t mind playing in the wind.”

Gudgel double bogeyed the third hole, but rebounded with birdies on holes 8, 10 and 12 to get back to even par.

“Someone told me after 12 that I had a three-shot lead,” Gudgel said. “After that I was shaking. It was a pretty scary feeling. To overcome that, I know now that I can overcome that kind of fear. I’ve always had this on my list of goals, but when I woke up this morning with a two-shot lead, I told myself to just go out and have fun, add them up at the end and see what happens.”

He made a great par save from a greenside bunker on the par-4 16th hole into the wind, then unleashed a drive of nearly 400 yards on the downwind par-4 17th, leaving himself just 60 yards out. Gudgel crushed another monster drive on the par-5 closer, left a 7-iron second just short of the green, then got up-and-down for birdie to close out his round.

Gudgel said watching his dad win the Senior State Am and Hughes shoot 55 were both inspirational.

“It honestly did change my perspective,” Gudgel said. “Zander  showed me that you can’t be afraid to make birdies. I think he had 14 birdies and two eagles, it was crazy, unbelievable.” Behind the play of Kyle and Hopper, Norman North forged a tie in regulation with Edmond North, which was led by Carson Blaser (ninth at 229 after rounds of 72-77-80) and Bo Burton (tied for 10th, 78-78-75). Blaser hit a beautiful second shot on the 18th to leave himself an uphill look for eagle from about 10 feet to win it, but it just slid by.

In the playoff, Norman North had birdies from Mack Moore, Hopper and Kyle on the 18th hole to finish at 2-under, one better than Edmond North. Norman North coach Ryan Rainer was emotional as he addressed what the victory meant to the players, the school and the coaching staff.

“I really love these guys and proud of what they did,” said Rainer, whose team won eight of nine events this spring. “This team has had the talent and ability, but they really learned to stay in the fight and have the presence of mind to keep after it, shot by shot. Some people may have said we were the favorite coming in, but in my mind, until someone beats Edmond North, they are the favorite. We had to go earn it.”

Norman North and Edmond North tied at 923 through 54 holes. Jenks, which had a two-shot lead entering the final round, had early trouble and finished third at 932, one shot ahead of Stillwater in fourth at 933. Norman High School was fifth at 940 and Broken Arrow rounded out the top five at 958.