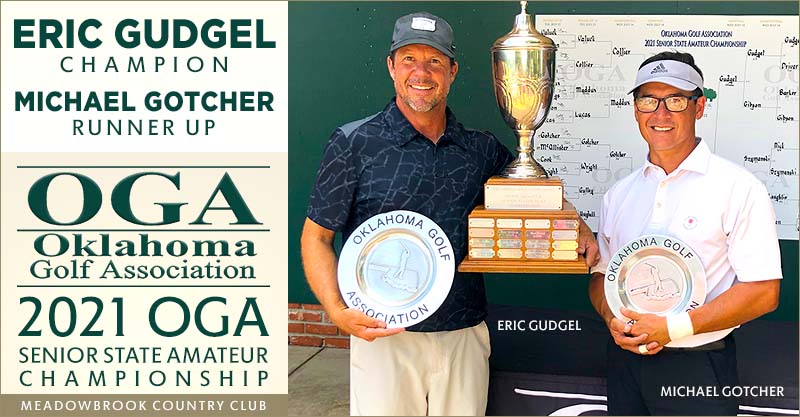 In a match filled with fireworks to the tune of 12 birdies and an eagle, it was a couple of duds that ultimately tipped the scales.

Eric Gudgel, a 53-year-old Stillwater native playing in his first OGA event, took advantage of a three-putt bogey by Mike Gotcher on the 11th hole to stem a huge change in momentum on his way to a 3 and 2 victory in the finals of the Oklahoma Golf Association Senior State Amateur Championship at Meadowbrook Country Club.

That touched off a celebration for the family, including son Grant, who was serving as caddie and earlier this summer won the 14-15 division of the OGA Junior State Amateur.

Gudgel, who up to now had preferred competing in 130-mile bike races on gravel roads to OGA events, had a magical final round with five birdies and an eagle. He went on a four-birdie run on holes 5-8 with a series of brilliant shots leaving mostly short birdie putts to grab a 3 up lead.

Gotcher responded with birdies on holes 9 and 10 to cut the lead to one and was poised to even the match on 11 after a solid drive on the dogleg left par-4. Gudgel meanwhile pulled his tee shot left into trees and by his third shot still had not reached the green. Gotcher tugged his second shot left and short, leaving about a 40-foot birdie putt which he rammed 5 feet past the hole and missed coming back. When Gudgel got up and down from left of the green to halve the hole, Gotcher’s momentum was blunted.

Even more so after Gudgel blasted his tee shot on the par-4 12th to within 60 yards of the green. Gotcher then pulled his left into trees and hit a tree on his second shot. The resultant bogey put him two down, and Gudgel followed that by pitching in for eagle from just right of the green on the par-5 13th.

“The whole idea on 11 was just to two-putt and take the hole,” Gotcher said. “That hurt, because of the momentum that I had been creating. But the tee shot on 12 was just a horrible, horrible swing. I actually kind of repeated the same swing from the second shot on 11, trying to hit a sawed-off cut and just came completely over it.”

“I never hit that fairway on 11 all week, it’s just a daunting tee shot,” Gudgel said. “But I thought if I could get it up-and-down, you never know. And that was the pivotal point. But I had to follow it up on 12. The two most important shots to me were my drives on 12 and on 13. They were massive. Getting two holes up with five or six to play and I’m going to be tough to beat as long as I can hit it straight.”

Still Gotcher fought back gamely. He birdied the par-3 14th hole, then hit a bomb down the middle on the par-4 15th. He wasn’t aggressive enough on his approach with a gap wedge, leaving himself a 30-foot uphill putt for birdie.

“It was a stroke play shot instead of a match play shot, just stinking thinking there,” Gotcher said. “I needed to go for it there.”

The match ended on the par-4 16th when Gotcher’s approach from 180 yards with a 7-iron flew all the way over the green and into a pond behind the hole.

Despite the few costly swings, Gotcher played well and credited Gudgel with playing even better.

“Eric just absolutely outplayed me,” Gotcher said. “We both had our moments of grandeur but I had more moments of foul-ups. My goal was to just keep nipping at his heels, because he was playing so good. But he played great and just outplayed me.”

Gudgel said he wouldn’t allow himself to even glance at the trophy throughout the week until it was actually his to claim.

“I’m more used to watching Grant than having people watching me play golf,” Gudgel said. “That was an interesting feeling, and I said I’m just going to do the best I can whatever happens. I’m just going to try to execute the best I can. I don’t dwell on bad shots and I give myself credit for hitting good ones and I hit a lot of them today. Strangely enough, now I can hardly remember any of them.

“Mike is such a great player. I don’t even feel like I’m in the caliber of a Mike Gotcher or some of the guys I played this week. But you know what, maybe I have permission now to feel like I do belong there.”

Gudgel certainly does. After one of the most exciting, well-played matches in this event in years, both golfers exited with their heads held high.