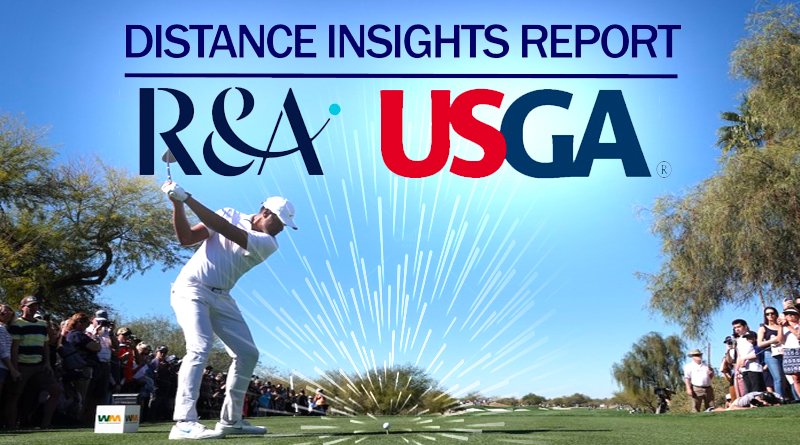 According to the recently released USGA and R&A Distance Insights Report (DIR) golfers (including you) hit the ball too far and future distance increases must be stopped by “rolling back” equipment performance.

The DIR effectively draws a line in the sand but did not say what would be changed nor indeed if anything at all would be done. However the implication is clear and quoting from the Report’s conclusion: “This report clearly shows a consistent increase in hitting distance and golf course lengths over the last 100-plus years. These increases have had a profound impact on costs to build, modify and operate golf courses and they have impacted golfers at all levels. We believe this problem will continue unless this cycle is brought to an end. With collaboration from the entire golf community, we have an opportunity to stem this tide and help ensure golf remains sustainable and enjoyable for generations to come.”

“Brought to an end” and “stem this tide” sounds like a prelude to reversing allowable performance of clubs and balls to some previous level. The Report also says more study and additional input from “stakeholders” is needed pushing the inevitable out at least a year. And if you have any doubt as to the outcome Mike Davis chief executive officer of the USGA went on record two years ago saying before his term of office ends, he will get the ball “rolled back.”

Neither does it seem there is much room for compromise other than arguing over how many yards will be pared. It’s baffling rules makers want to keep golfers from hitting the ball farther, in effect making the game harder, while at the same time putting out press releases of their dedication to “grow the game.” Not being on the inside of golf’s highest councils the reasoning of this apparent dichotomy is not apparent. It does seem that golf’s traditions are being skewed to overwhelm common sense and rationalize the idea tee balls ought to go less distance.

The history of golf is filled with technological advancements, from the rubbery ball,  the wound ball, steel shafts and metal driver heads just to name a few. The current solid core ball and high rebound clubfaces were merely the next step. Will that progression now come to an end?

But wait, the DIR admits average golfers may not be the problem,  noting driving distance last year for the average male recreational player was essentially unchanged from 2005.

So, the golfers hitting too far must be professionals and top amateurs, the elites. These are the bigger, stronger, faster guys thrilling us at PGA Tour events by smashing the ball distances we can only imagine. They have the physical attributes, training and ability to take maximum advantage of the low-spin solid core balls and clubs with lots of trampoline effect.

But the DIR also seems to ignore some basic facts and Frank Thomas, inventor of the graphite shaft and former Technical Director of the USGA puts it succinctly. “Fortunately, the laws of nature are playing an important part in governing the distance the ball will travel, while the athleticism of the elite golfers – about 0.1% of the golfing population– has changed, as it has in all other sports. Unfortunately — for most of us – this has not been as significant a change.”

This is analogous to the argument more length and more resources are necessary to contain the longer hitting elites, a situation which has already been resolved for virtually all the layouts used at the elite level. No less an authority than the Golf Channel’s Brandel Chamblee tweeted after the Genesis Invitational, “Riviera proved this week, just as Merion did at the U.S. Open in 2013, that courses designed in the golden age of architecture are not made obsolete by today’s equipment. Firm conditions and green speeds that allow the use of interesting contours is all that is needed. And trees.”

Courses may be closing because of too few players but none have locked the doors due to too few yards and certainly no players are leaving the game because they hit the ball too far making the game too easy. While it was true that developers and architects fell hard for longer, more difficult layouts in the 1980s and 1990s, there has been a revolt and a return to more classic design concepts in more recent courses. It’s really only the courses that host a PGA Tour event or major championship that have to worry about the bomb-and-gouge philosophy of the biggest hitters. Think tighter fairways, firmer greens and challenging pins if you want to control scores.

For years the USGA and the R&A have been beating the drum golf has a distance problem and it would be naïve to believe the DIR wasn’t compiled with “we’ve got to do something about this” in mind. A reasonable guess would be the Rules will be changed to rein in distance by limiting club responsiveness or ball speed or both.

But since most weekend warriors feel pretty good if they can get a tee shot rocketing out beyond 200-yards, the obvious solution is two sets of rules. One for regular people and one for the elites but here the USGA comes up against their long-held policy that such a bifurcation of the Rules is unacceptable.

Faced with solving the supposed distance problem and without splitting the rules based on playing ability, the most probable solution is a local rule allowing events such as the U.S. Open to specify a lower amount of clubface rebound or a shorter flying ball.

Social media is filled with comments blaming equipment companies for what some say is the excessive distance the ball travels and ignoring the culpability of the USGA, which for 20 years observed the progress in equipment and chose to do nothing.

The idea that guys who have spent millions of dollars creating modern balls and clubs would put themselves in the position of being penalized for doing too good a job is irrational. It defies logic why any company, much less a whole industry, would do that when the real motive is to make money. Golf equipment companies are the same as the company for which you work endeavoring to make a product or preform a service that fills a customer need at a profit, i.e., capitalism 101.

For the major manufacturers, Tour player validation is a key factor in the marketing plan. The implied premise being that with the latest and greatest club/ball/shoes/glove/etc. any weekend warrior can rip it like Rory, D.J., Brooks or Bryson. Talk about irrationality but that’s the basic sizzle in the golf equipment message and two sets of equipment standards would certainly muffle and possibly silence Tour player validation from manufacturers’ product promotion.

Finally, chances are close to zero the club and ball makers will take this lying down. Could a manufacturer sue the USGA? Or will the institutional memory of the PING lawsuit 20 years ago make our game’s ruling body reluctant to the fight a legal battle?

Good questions but one thing is sure, the Distance Insights Report increases the drumbeat for change. For golf equipment, it’s all over but the shouting.