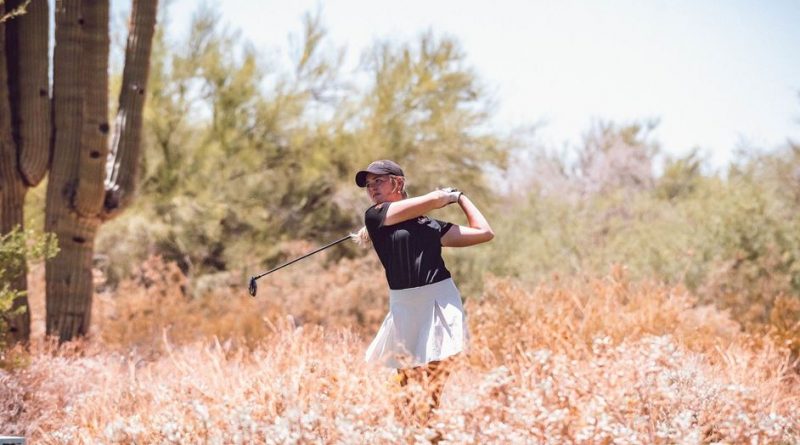 SCOTTSDALE, Ariz. —- Behind the efforts of Maddison Hinson-Tolchard’s round of 68 on Saturday, Oklahoma State women’s golf moved up to 19th on the second day of the 2022 NCAA Women’s Golf Championships at Grayhawk Golf Club in Scottsdale, Ariz.

Hinson-Tolchard finished 4-under at the par-72, 6,340-yard layout in a round that featured birdies on holes 12 and 8 and an eagle No. 7 after starting on No. 10. After starting the day tied for 93rd, she will head to the third day of action tied for 16th at 2-over for the tournament.

Her 68 matched the lowest round in the field in Saturday’s round.

As a team, the Cowgirls stand at 31-over through the first two rounds.

“I had like 225 meters for the green and didn’t think I could get there,” Hinson-Tolchard said of her eagle. “But I knew I was going to get somewhat close. So, I just hit my shot, hit the 3-wood really well, and I said to myself as I walked up to the wedge shot ‘I’m going to hole this.’ And it went in quite firmly. But it went in, so I’ll take it.”

Elsewhere in the Cowgirl lineup, Han-Hsuan Yu carded a 75 to finish the day 3-over and 8-over for the tournament while Hailey Jones posted a 6-over 78 to move to 8-over on the weekend.

Rina Tatematsu finished the day with a 79. Her 7-over day moved her to 14-over heading into the third day of work. Lianna Bailey rounded out the lineup on Saturday with an 80.

Stanford closed the second day just as it finished the first, in first, at 5-over while Oregon moved up five spots to head to the third round in second at 9-over. Auburn and UCLA closed the day tied for third at 10-over.

The championship format in Scottsdale includes 24 teams and 12 individuals completing 54 holes of stroke play, and then the top 15 teams along with the top nine individuals not on an advancing team competing for one additional day of stroke play to determine the top eight teams for match play competition and the 72-hole stroke play individual champion.

“It was frustrating at times,” Hinson-Tolchard said. “I was hitting lots of greens and there were just so many putts that were close and on the edge. So that was the frustrating part. But at the same time, it was good because I wasn’t putting any blemishes on the scorecard so bogey free is always good.”

Looking ahead to the 15-team cut line, San Jose State and Virginia finished Saturday’s round tied for 14th at 27-over. Wake Forest and Mississippi State are tied for 16th at 29-over while South Carolina is in 18th at 30-over.

“That’s probably as good of a round as you’ll see out of anyone today,” head coach Greg Robertson said about Hinson-Tolchard’s performance. “She played awesome and showed up today and got it done. We needed it. It was great to see. I’m excited to see what she can do these next couple days.”

Oklahoma State returns to action on Sunday at 2:36 p.m. CT for the third round of play. Fans can follow along with live stats on golfstat.com and receive updates on the team’s social media accounts throughout the day.

“It was just fairways and greens,” Robertson continued in reference to Hinson-Tolchard’s round. “I think it probably could have been a good two, three or four shots better if a couple more putts had fallen. It was a very steady, even round. It didn’t look like she was going to make any mistakes out there.

“That’s how you have to play a golf course like this. It’s tough. You have to be patient and disciplined. And when you’re not, that’s when the big numbers will hit you. You have to know when to attack and when to hit more toward the fat part of the greens.”

For more information on Cowgirl golf, continue to check back with okstate.com.