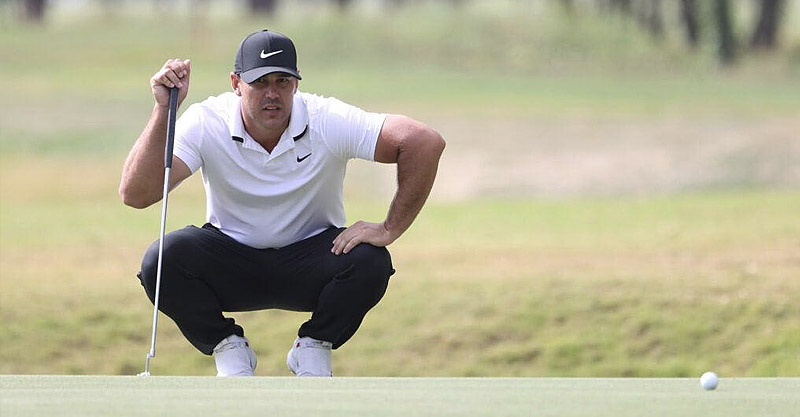 As the PGA Tour events of the fall reach their close, we’re gifted with the Hewlett Packard Enterprise Houston Open from the Memorial Park Golf Course. The lineup is talent stacked, and we’re taking a first look at how to approach this tournament from a betting perspective.

Despite struggling with his current form, it’ll be Brooks Koepka who’ll headline the field in Houston. Koepka has failed to earn a top-10 position since the Open Championship and is coming off a disappointing performance at Mayakoba last week. If Koepka is to bounce back, there’s no better course than the Memorial Park in which he assisted Tom Doak with the design. Before the 2020 Masters, Koepka finished with a T5 on this course, proving that his understanding of the course can certainly assist his game.
Top tier competitors like Sam Burns, Matthew Wolff, Tony Finau, Tyrell Hatton, Sungjae I’m, Patrick Reed, Scottie Scheffler, and Cameron Smith will join Koepka in the field.

Alongside moving to the fall swing, the Houston Open lost sponsors and moved from course to course with no place to call home. Before 2018, much hope was lost, as many critics expected the tournament to become subsided.

However, the financial backing from the Houston Astros’ foundation and an agreement with the council of Houston to renovate a public golf course should the PGA Tour be allowed to come downtown Houston has revitalised the long-standing tournament.

The Memorial Park course state was far from PGA Tour ready – in step Tom Doak, a well-renowned architect whose limitless imagination assisted in the course’s reconstruction. Doak had already left his mark on the golf course world, with golf destinations such as Pacific Dunes and Old MacDonald, Cape Kidnappers, Tata Iti, Streamsong, and Pasatiempo becoming some of the globes most sought after grounds to play on.

Doak brought in Brooks Koepka to consult on the courses positive and negative aspects. Their collaboration proved well, and Memorial Park was perfectly prepared for professional and amateur action alike. Overall, Memorial Park presents a challenge for professionals but also becomes a pleasurable course for amateurs. Since the arrival of financial backing from the Houston Astros and Hewlett Packard, the Houston Open has secured its position on the PGA Tour calendar.

In 2020, sports bettors and sports handicapping forums aimlessly wagered on the Houston Open. Nobody is to blame; it was the debut of this golf course, which provided zero historical statistics to assist bettors. 2021 will give handicappers a small sample of data they can analyse before making their predictions. Of course, small sample sizes don’t present a huge advantage, but it’s undoubtedly a better place to be than 2020.

Behind the turmoil of 2020 and the global pandemic, Carlos Ortiz lifted the trophy with a winning score of -13. Hideki Matsuyama and Dustin Johnson came in a close second, finishing two shots behind Ortiz with a score of -11. Returning visitors Sam Burns, Jason Day, and Tyrrell Hatton finished with top-10 positions. The course was notably more challenging between solid turf conditions and surrounding greens than most PGA Tour conditions. A 61% hit on fairways and 64% on greens in regulation saw many scores muted.

Doak and Koepka indeed created a course that contested the sports best, with undulated greens and tight Bermuda chipping areas.

A favor towards the distance off the tee should be noted, with the Top 10 ranked players averaged above length off the tee rather than the field. The Top 10 average was no less than 297 yards off the tee, with six of those Top 10 hit more than 300 yards. Drivers were a prominent tool, with minimal hazards off the tee.

Brooks Koepka helping to design the course is telling, with Memorial Park clearly favouring players who can hit decent short and long iron shots – something Koepka does incredibly well. Including the fact that he loves to hit driver. The shot distribution of multiple courses can be compared to Memorial Park. Augusta National, Riviera Country Club and TPC Scottsdale performances can provide insight into which players will succeed in Houston. Hideki Matsuyama and Dustin Johnson are Masters Champions, and Koepka regularly delivers when playing at Augusta. Koepka and Matsuyama own a combined four wins at TPC Scottsdale, showing that a course like Houston shouldn’t be as difficult for them. Those firm conditions we previously mentioned can be found at Riviera, a course where Dustin Johnson rarely fails. Finally, the current champion Carlos Ortiz has already delivered on this course and boasts Top 10 finishes at similar courses like Waste Management Phoenix and The Genesis Invitational.

Although we aren’t working with significant amounts of data, last year’s results are telling. Weather conditions will be a factor, but I think it’s safe to assume that anybody finishing in last year’s Houston Open Top 10 has a great chance at replicating success, or even better, taking the championship.