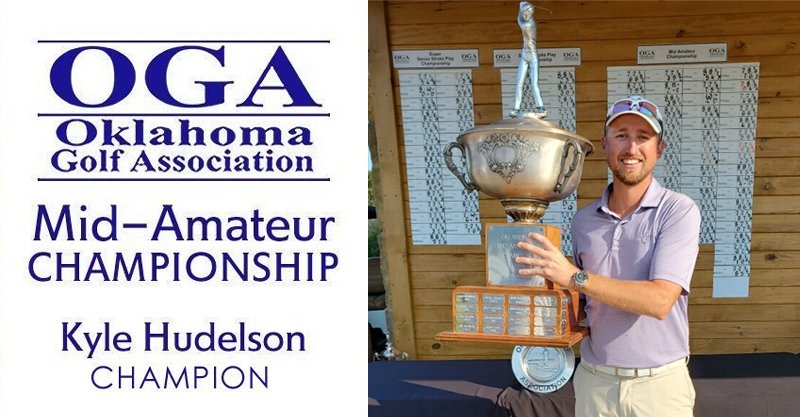 OKLAHOMA CITY – On some loaded small-college golf teams at Oklahoma Christian, Kyle Hudelson of Edmond often found it difficult to break into the lineup. But in young adulthood, he’s blossomed into a player who’s a threat to win in amateur events.

He earned his second straight Oklahoma Golf Association Mid-Amateur Championship title on Tuesday, posting five birdies over the final 11 holes to pull away for a three-shot win over J.R. Hurley of Norman at Quail Creek Golf and Country Club.

Hudelson, a 32-year-old who works for NFP Property and Casualty of Oklahoma City and plays out of Gaillardia Country Club, followed his first-round 67 with a 4-under-par 68 over Quail Creek’s 7,099-yard track and finished at 9-under 135 for the tournament.

Hurley shot a final-round 70 while Phillip Bryan of Norman, who entered the round tied for the lead with Hudelson, posted a 73 and dropped to third at 4-under 140.

“It was nice to defend,” Hudelson said. “I hadn’t played a competitive round since January. With COVID, everything got cancelled.”

More often than not, Hudelson wasn’t in the Eagles’ starting lineup, but he credits OC coach David Lynn with helping push him to a higher level of competition – something that has paid off post-college.

The week of the USGA Four-Ball “was the week that I learned I could hit shots under huge amounts of pressure,” Hudelson said. “It’s hard to replicate that (pressure) elsewhere, outside of a PGA event. It was just crazy. … All of a sudden you wake up one morning and you’ve got the only tee time on Pinehurst No. 2.

“I always joke with coach Lynn that it’s too bad I didn’t start my college career at 26. I think I might have finally cracked that top five every once in a while. Golf didn’t make sense to me in college. I put way too much pressure on myself. Now, it doesn’t matter if I go win the Masters – I’m still an insurance salesman.”

Hurley held a two-shot lead after seven holes on Tuesday. But at the par-5 No. 8, Hudelson hit a 40-yard bunker shot over a hill to get up and down for a birdie, while Hurley parred the hole. Hurley answered with a birdie at No. 9, at which point Hudelson realized, “I’ve got to start making some birdies.”

At No. 10, Hudelson knocked home a 20-foot birdie putt and pulled back into a share of the lead with a birdie at No. 11. Then came the pivotal No. 12, a par-3 with a tee shot over a lake. Hurley’s first tee shot found the water, while Hudelson’s nestled in a grass bunker to the right of the hole and Bryan’s went into a sand bunker in front of the hole.

Hudelson saved par, but Bryan bogeyed and Hurley ended up with a double bogey, giving Hudelson a two-shot lead that never was threatened.

“All that happened bang, bang, bang,” Hudelson said. “After that, I didn’t have to get aggressive. That was the best part. I just had to keep it in the fairway. That really freed me up.”

For good measure, Hudelson sunk an 8-foot birdie putt on No. 15 while Hurley missed a birdie opportunity of equal length. Hudelson just missed an eagle putt on the par-5 No. 18 but left himself a simple birdie putt to close out the tournament.