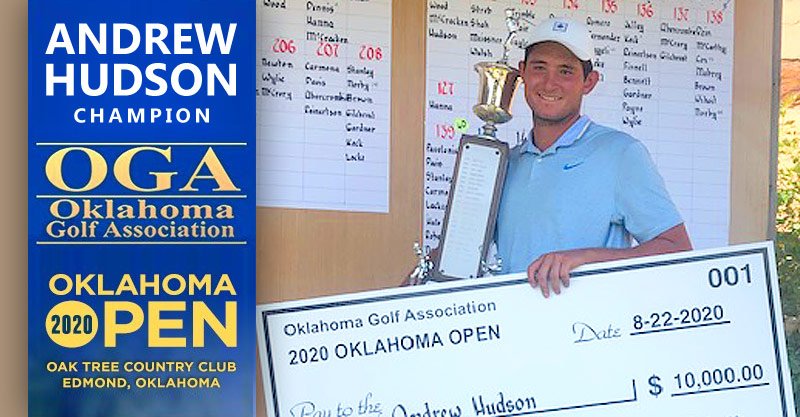 Those opened the door for Andrew Hudson of Fort Worth, a 2018 graduate of North Texas, to jump in and claim the championship against one of the most talented fields in recent years.

Hudson, playing in the penultimate group, shot a final round 3-under 67 to finish at 13-under 197 and won for the first time as a professional or collegian. It was his third Open and he tied for sixth in 2019.

The final group of Chase Hanna of Leawood, Kan., Hayden Wood of Edmond and Logan McCracken of Oklahoma City each had their chances to pull this out.

Hanna started the day with a three-shot lead and with three birdies in his first eight holes had moved to 16 under and seemingly in command. Bogeys on the par-4 ninth and 11th dropped him into 14 under, and McCracken, with four consecutive birdies on holes 6-9, was suddenly even with him at 14-under.

McCracken, however, was the first to make a fatal mistake, hitting his tee shot on the par-5 12th out of bounds to the right, leading to a double bogey.

Wood, who began the day three shots behind at 10-under, kept grinding away and finally pulled within a shot of the lead after making a birdie on the par-4 13th followed by Hanna’s three-putt bogey on the par-3 14th.

Wood’s Waterloo came on the par-4 15th, after he hit the best approach of the three, then three-putted from 12 feet to drop two shots behind again.

“It was stupid on my part, but there was a bug that kept buzzing around the ball and I got distracted and blasted it about four feet past,” Wood said.

Hanna made solid pars on 15, 16 and 17 and had a one-shot lead over Hudson, who had concluded his round, and two over Wood as he stood on the tee on the 18th hole. He chose driver on a hole most of the players choose 3-wood, and when he pulled it slightly left it took two hops on a cart path and rolled out of bounds, resulting in a triple bogey that dropped him from first into a tie for fourth.

Wood ended up with a solid chance to force a playoff with Hudson. He hit a great approach hole high on the 18th, but pushed his putt just enough to miss on the right, leaving him tied for second with Jamey Taylor of Big Spring, Texas, who had finished earlier with a final-round 65 to reach 12-under.

“It’s disappointing,” Wood said. “I hit the ball really well this week but just had a few little mistakes. I was at 13-under in the second round when I made a double bogey and I think that as much as anything today cost me the tournament.”

The son of two-time champion Willie Wood had his father on the bag for the final nine holes and the two came close to adding an Open title to Hayden’s previous OGA accomplishments, which include the 2018 State Amateur Championship, the 2012 and 2013 State Junior Championship and the 2013 OGA Stroke Play Championship.

“It would have been nice to get the sweep,” said Wood, who has been playing events on the All Pro Tour this summer.

Hudson pocketed the winner’s check of $10,000 with his rounds of 67-63-67. One of his playing companions in the final group was two-time champion and PGA Tour regular Robert Streb, who never got anything going Saturday with an even-par round to finish at 8-under 202.

“It was good to see how he managed his game and also good to see that my best stands up pretty well,” Hudson said,

Hudson drained what onlookers estimated as a 70-foot eagle putt on the par-5 fourth hole and birdied holes 10, 11 and 12 to move to 14-under, but hit his tee shot in the water on the par-3 14th. He recovered from that double bogey with a birdie on 16, then after two pars waited to see if anyone in the final group would knock him out.

“He played a really solid round,” Streb said of Hudson. “And he made some great putts. That eagle was every bit of 70 feet.”

While he waited, each member of the final group  knocked themselves out, and Hudson walked away with the check and the trophy.

Jamie Voegeli, who recently won the OGA State Amateur Championship at The Patriot, was the low amateur. The Meadowbrook Country Club member from Tulsa shot rounds of 71-64-69 to tie for 14th at 6-under. He was 7-under through his first six holes and shot 29 on his opening nine in the second round Friday.