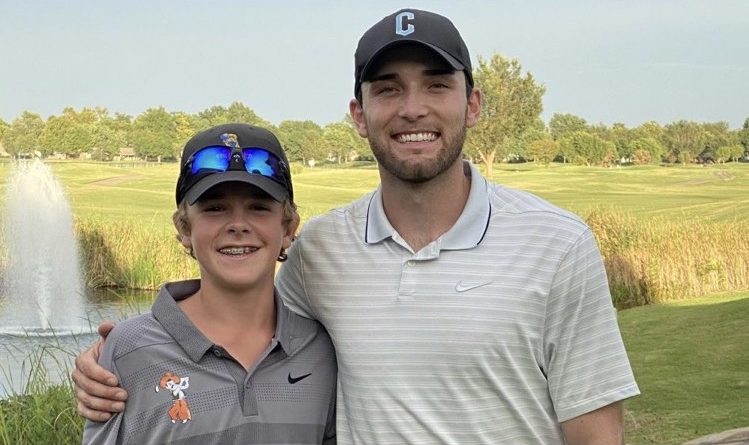 Janice Gibson had a simple message for her protégé Alexander Hughes after his incredible world record tying 55 last Thursday at South Lakes Golf Course in Jenks.

Gibson, the executive director of the First Tee of Tulsa, has been teaching and mentoring Hughes, now 24, since he first came to the program as a 9-year-old with a twinkle in his eye and a determination to succeed. He was in the program from 2005-2014 and reached the highest level, which is Ace.

“Janice is like my second mom,” Hughes said. “She’s an amazing woman and always so proud of me. I couldn’t wait to share this with her.”

“He’s a special kid to me,” Gibson said. “He’s got such talent and everybody loves Zander. He and his family are great people. I believe he’s going to make it in professional golf if he wants that.”

Hughes has definite designs on a professional career, but for now is enjoying the sudden celebrity thrust upon him by his 16-under-par round. That includes interviews with all the major golf publications and many podcasts, radio stations and other web-based sports sites.

“The last five days have been incredible, non-stop interviews,” Hughes said Tuesday. “I have another tomorrow with a Los Angeles podcast, another in Las Vegas and one in Dallas. I never thought it would blow up like this.”

The 55 ties the 16-under round shot by Rhein Gibson in May of 2012 at River Oaks Country Club in Edmond. Gibson was then a young professional out of Oklahoma Christian by way of Australia and has gone on to earn status on the PGA Tour while still living in Edmond and playing out of Oak Tree National. He is still prone to go crazy low, shooting a course record 60 this summer at Shangri-La Resort. Hughes, who played four seasons at the University of Central Oklahoma after his high school career at Edison in Tulsa, has met Gibson, but his contemporaries and friends are now his former teammates or young pros like Brendon Jelley of Jenks and his former Oklahoma State teammates Austin Eckroat and Nick Heinen, who is now caddying for Matthew Wolff, as well as Quade Cummins at Oklahoma.  He has so far played three events on the All Pro Tour with two others coming up in September.  He is working on lining up sponsors for a full run at the pro life in 2021.

“Growing up, I was not even close to being top of the pack,” Hughes said. “But I’ve gotten better and my length is a real asset. I’m certainly playing with a lot of confidence now, swinging the best I have in my life. Down the road, my opportunity will present itself in whatever avenue I settle on. “

For now, he’s taking a few days to enjoy the glory of a round that only occurred because Hughes is basically a really nice guy.

He went to South Lakes that day with no intention of playing but just to hit balls. His putter had a new grip that was just put on and was still drying in his car. But on the range he met Grant Gudgel, a 14-year-old from Stillwater who was practicing for that weekend’s event on the Oklahoma Junior Golf Tour.  After talking for a bit, Hughes volunteered to play a round with Gudgel to show him how to attack South Lakes.

It was a pretty good lesson. Hughes aced the par-3 second hole and then began overwhelming the 6,413-yard course with his length, which includes drives of up to 350 yards, and his deft short game. He made five consecutive birdies on holes 4-8 and then eagled the par-5 ninth for an opening 26. After making two birdies and three pars on the first five holes of the back nine, he drove the green on the par-4 15th and made a 30-footer for eagle, then followed that with three consecutive birdies.

On the short par-5 18th, he had just a 50-degree wedge in from 161 yards in the right rough for his second shot, but pulled it left and short, denying himself a look for eagle for the record 54. He hit a nice pitch and run up to three feet for the birdie.

“He learned early to hit shots with the leading edge and not try to flop everything,” Gibson said. “He did that on the last hole there to tie the record.”

“Grant was telling me how I stood so I knew the last putt was for a 55,” Hughes said. “That was the first time I really thought about it. I just hit a good putt at the left edge.

“It was awesome to say the least.”

Gudgel’s father had come over to watch the final hole and Grant yelled, “Dad, I just shot 2-under and lost by 14.”

“Grant was my big supporter,” Hughes said. “He kept track of where I was and kept asking me if I wanted to know. It was one of those days when the hole was huge and every putt I made was going in. When I get in a groove like that, I don’t pay too much attention to score, but he knew where I was on every hole.”

Gibson said she knew Hughes had a passion for the game early, when one day he missed a session and relayed that he was serving a penance for cutting a hole in the sofa to chip the ball in to. In early tournaments she would tell him to “get your game face on.” When Gibson, a long-time LPGA professional, got in the 2007 U.S. Women’s Open at Pine Needles as the last alternate and was running through the parking lot to check in and get to the first tee, an 11-year-old Hughes was calling her cell phone and leaving her a message to “get your game face on.”

Hughes’ first round following the 55 was at Mohawk Park, where the First Tee of Tulsa is located, and he shot 68. He and Gibson have scheduled a round for next week.  It will be joy for both. Game faces are optional.