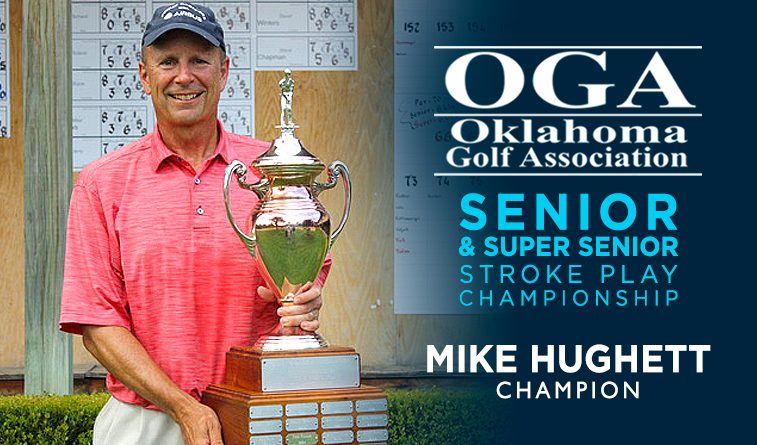 EDMOND – Mike Hughett won his first Oklahoma Golf Association title in 1986, then had to wait 14 years before his second OGA win.

“I was wondering if I was ever going to win one again,” he said.

These days, his competitors are wondering if he’ll ever stop winning. The 59-year-old from Owasso picked up OGA title No. 21 on Thursday, beating Blake Gibson of Yukon in a one-hole playoff to take the Senior Stroke Play Championship at Oak Tree Country Club’s West Course. Hughett and Gibson both finished regulation at 3-under 137.

It was Hughett’s fifth title in the Senior Stroke Play event, having previously won in 2009, 2010, 2012 and 2016, and his second OGA win this season. In May, he teamed with Kirk Wright of Oklahoma City to win the Senior Four-Ball Championship at The Club at Indian Springs in Broken Arrow.

“I’ve always seemed to do better in the stroke play,” he said. “In match play, you never know when you’re going to get somebody hot. That happened to me this year. The thing is, you’re not getting any younger. You never know when your last one’s going to be, so you’ve got to cherish each one that comes along. I’m very happy to be able to get another individual title.”

After a 1-under 69 in the opening round on Wednesday, Hughett entered Thursday tied atop the leaderboard with the defending champion, Jon Valuck of Oklahoma City, and a shot ahead of Gibson.

Valuck birdied the first two holes Thursday to move into the lead, but bogeyed No. 4 and Hughett seized the lead with a birdie at the par-3 No. 6. He didn’t lose it the rest of the day, but Gibson made him sweat.

Hughett was 3-under for the tournament after a bogey at the par-4 No. 13, but he still had a two-shot lead over Gibson at that point. Gibson had a six-foot birdie putt at No. 15 lip out – “I let one get away,” he said – but hit a birdie putt at the par-5 No. 16 while Hughett made a mess of the hole and bogeyed.

Both men birdied No. 17 to move to 3-under and each hit a clutch putt – Hughett from about eight feet, Gibson from about four feet – to save par at No. 18, forcing the playoff. Valuck eventually shot 1-over for the round and tied for third at even par with Ricky Lutz of Oklahoma City.

Teeing off on the par-4 No. 1 in the playoff, Gibson’s drive went down the middle of the fairway while Hughett’s went right and narrowly missed going into a bunker. With three trees blocking a direct path to the green, Hughett skied his approach shot high to clear the trees and it landed softly on the green, about eight feet from the hole.

“He’s the champ and he’s won it a million times,” Gibson said. “My hat is off to him. He is a good player and hard to beat. He doesn’t make very many mistakes.”

Gibson’s second shot found the bunker in front of the green and although he was able to blast out onto the green, he left his 15-foot par putt short after Hughett had tapped in for his par.

Hughett’s 21 OGA titles are in addition to the two he won in his native state of Nebraska, the first of which came in 1977 at age 18 as that state’s Amateur Championship. He turns 60 next month and will retire, “and I plan on playing even more golf,” he said. “I’m looking forward to that.”

He shows no signs of slowing down – next Tuesday, he’ll play in the OGA State Amateur at The Patriot in Owasso, where he’ll face John Ryan Bonaobra of Broken Arrow, a Central Missouri senior who recently won the Tulsa City Championship and shared the lead in the qualifier at Bailey Ranch Golf Club in Owasso.

“I’ll keep playing for a long time,” Hughett said. “I don’t mind playing with kids who are 40 years younger than me. It’s fun. At least I’ve been there before. My name is on a few trophies. This really makes my year, winning an individual tournament like this.”

Jerry Nick of Oklmulgee shot rounds of 73-71 for a four-shot victory over Tom Nielsen and Jim Wetzel, both of Edmond, in the Super Senior Division for those ages 60 and over.