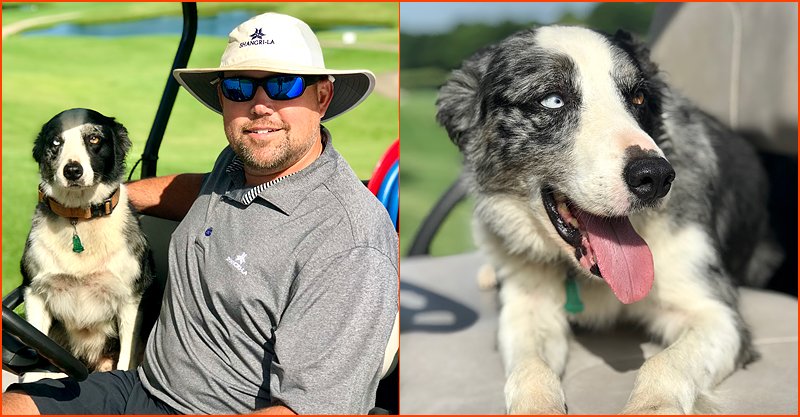 You see them at golf courses everywhere, a superintendent and his trustworthy and hard working canine companion. Here’s one example from Mike Williams, Director of Communications at Shangri-La Resort on Monkey Island.

Before you start longing for “a dog’s life,” perhaps you should take a look into a day on the job for a working dog. A workday for “Bogey,” whose title is either “Director of Golf Course Control” or “Golf Course Dog,” depending on his performance at any given time, involves fifteen miles a day of running the course, chasing geese, arguing with the other dogs on Shangri-La Golf Club’s canine crew, or working under the strict supervision of Golf Course Superintendent Justin May.

A rescue Border Collie, Bogey has seniority among the Shangri-La Golf Course Canine Crew. He’ll soon be seven years old, but he came to the golf course team as a mere pup in the winter of 2014 – and has worked like a dog ever since.

Like many employees in lots of places, Bogey doesn’t always stick to his assigned tasks.

“He checks the level in the water hazards,” Justin moans. “And he’s a regular at the Turn House trying to run quality control tests on the bacon; but he’s really supposed to be keeping geese off the golf course. That’s how he got the name ‘Bogey.’ Sometimes he just doesn’t stay focused enough to make things happen exactly like he should. Just like our players, when things don’t go exactly like they should, you end up with a bogey. That’s how he got his name,” Justin grins.

Bogey is a favorite with the staff and members at Shangri-La. He waits obediently on Justin’s golf cart while meetings are going on, but the instant Justin fires up his golf cart, Bogey is off and running – always trying to stay ahead of Justin and lead him where he’s supposed to go, but always looking back – and sometimes backtracking – to make sure he and Justin are both headed where they need to be.

“That’s where those vet bills come in,” Justin says. “He starts and stops and darts and dodges so much, he sometimes has a problem getting run over. But he’s always right back at work.”

If you are not familiar with the four-legged “Director of Golf Course Control” job description, it involves working in the stifling heat and the crippling cold, year-round. Pay is embarrassingly low, but benefits are plentiful – all meals and snacks (including bacon) are provides, along with 100% paid medical and dental. Full room & board is paid, and transportation to and from work is provided daily. Breaks are provided for naps during the workday. Living expenses are provided including wardrobe care.

Bogey is a dog of few words, but he did share a few of his thoughts about life as a Golf Course Control supervisor at Shangri-La.

His favorite part of the golf course to search for those pesky geese?

How would he describe his job?