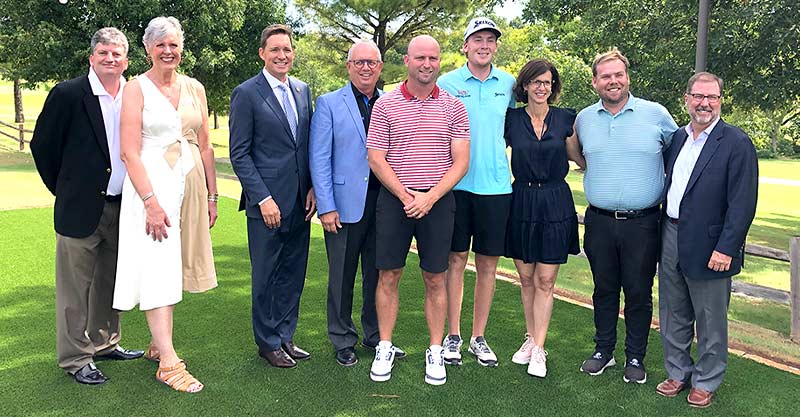 There were smiles all around as the Korn Ferry Tour officially announced the new Compliance Solutions Championship for a five-year run at Jimmie Austin OU Golf Course Tuesday, with the first event coming up June 22-25, 2023.

Title sponsor Mark Lammert, CEO of Compliance Solutions and an Oral Roberts University graduate, is excited about the golf and the potential to expand his Florida-based accounting, tax and business advisory services in his former state. The tournament will have a purse of $1 million for 2023.

The tournament’s official charity will be Autism Oklahoma and board member Mike Panas and founder and executive director Melina Laufferburger were both on hand to showcase the noble work of that entity.

With the huge number of players with Oklahoma ties typically vying for their PGA Tour cards on the Korn Ferry Tour and the extremely high level of play, it would seem an event ripe for Oklahomans to embrace and quickly establish as one of the highlights of the Korn Ferry Tour schedule. The Oklahoma Sooners and OSU Cowboys are unquestionably two of the top five collegiate programs in the country and are a pipeline of talent for the Korn Ferry Tour, much of it homegrown.

For example, as the Korn Ferry Tour playoffs begin this week, Austin Eckroat from Edmond and OSU and Quade Cummins from OU and Weatherford will both be seeking PGA Tour cards for 2023, as will former OSU star Sam Stevens from Wichita. They were among the players ranked 26 through 75 on the 2022 Korn Ferry Tour points list who will compete against the players ranked 126 through 200 on the PGA Tour’s FedEx Cup standings for 25 PGA Tour cards in the three-event series.

“The Compliance Solutions Championship will be an incredible showcase of 156 of the world’s best up-and-coming players,” said Korn Ferry Tour President Alex Baldwin. “You will see a depth of talent and level of competition that is among the best in the world. Outside the ropes we’ll see this community and the entire Sooner state rally around this championship in order to generate significant charitable and economic impact for the community.”

“I’m very proud to stand up here and tell you how big of a deal this is,” Pinnell said. “The PGA Championship just had over $158 million in economic impact not just for Northeast Oklahoma but the entire state. What I’m looking forward to with this relationship and partnership is demonstrating that Oklahoma brand.”

“I have eight current guys on the Korn Ferry Tour and for them to be able to come home and play in their back yard will be truly special,” Hybl said. “This is truly a special day for all of us and I can’t thank everyone enough who has made this a reality for all of us.”