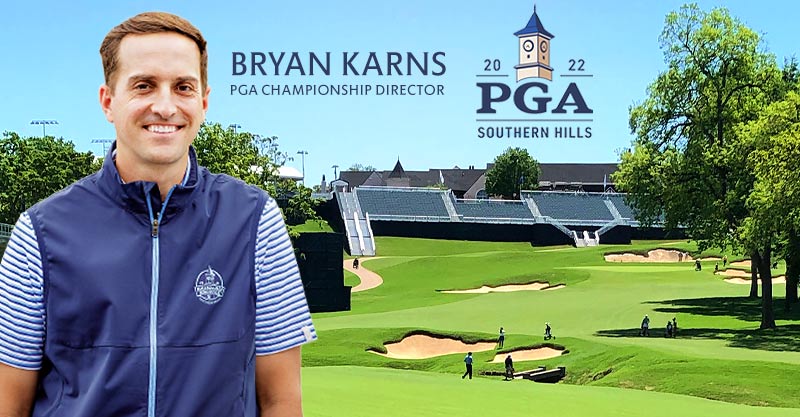 The countdown has reached just four days before the world’s best golfers begin practice rounds for the 2022 PGA Championship at Southern Hills. Superintendent Russ Myers and his crew including volunteers have the course in amazing condition. More than 3,000 volunteers are finishing training and ready to execute the myriad of tasks it takes to make a major championship hum smoothly.

Beginning Friday through Sunday, the 2022 PGA Shops, a football field-sized merchandise tent, opens to the public with shuttle buses running daily from 9 a.m. to 6 p.m. from Lot C at Oral Roberts University.

For Championship Director Bryan Karns, the next 11 days until the tournament concludes May 22 will reveal if three years of planning results in essentially a newly built city bursting at the seams with up to 40,000 visitors daily can function smoothly and efficiently to provide a great experience for players, spectators and all involved.

It’s a monumental task and one with hundreds of thousands of moving parts. On Thursday alone Karns estimated more than 1,000 workers representing 20 or more vendors were on site putting the finishing touches on projects large and small.

“Now is when you see how some of our young volunteers can really handle things,” Karns said. “Fifteen years ago I was one of the interns that eventually made it with the PGA of America. But we’ve now crossed the threshold of what our normal patience level is suited for. You see the ones who were here last night until midnight, if they’re still working hard with a smile on their face, then they have a chance. If you don’t have fun this week and next, then you’re probably not wired for this.”

Karns appears perfectly wired to handle the crush of information, issues and problems flowing at him at breakneck speed. He said the main vendors are not his biggest concern, it’s making sure the myriad of special events associated with the tournament between now and next Friday each have their needs met and go off smoothly.

“There are moments when, as much as you plan, it turns chaotic,’” Karns said. “The Senior PGA is small enough that you can almost wrap your hands around it. This is an entirely different scale and sometimes you get curveballs thrown at you.”

Consider what’s involved just in providing food and drink to all the corporate chalets and concession stands. “Food and beverage is a unique environment,” Karns said. “A lot of people can cater a 200-person dinner, but can you cater 200 people for breakfast, lunch, dinner, all-day bar and snacks in an environment where you don’t have your permanent kitchen? And do it seven days in a row in every tent? The main vendor for catering is Delaware North out of Buffalo, N.Y., and it will have 75 full time staff on hand plus over 1,000 workers hired locally, many of them groups from non-profits that work in exchange for donations to their NPOs. Karns said more than $100,000 will flow to various non-profit organizations in exchange for labor over the course of the PGA Championship.

Though his days now begin at 4:30 a.m. and end past midnight, Karns is calm in the eye of the storm of preparations. Will he get to see much if any of the tournament on which he’s worked so hard to lay the groundwork?

“When the special events are done by Friday, I try to take in a little more,’’ he said. “But it’s not my nature to turn the radio off and watch. I’m at my happiest when I’m making sure that everything is okay and everyone is enjoying themselves.”

And when it’s over in a blink, Karns will be on hand for months after to supervise the dissolution of the new city at Southern Hills. His next assignment is the 2025 PGA Championship at Quail Hollow, and that course is hosting the President’s Cup in September, so there is no rush to get on site until later in the fall.