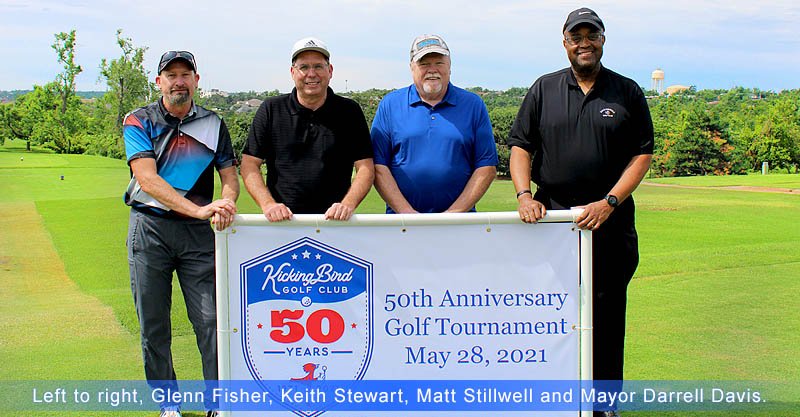 One of Oklahoma’s most popular public courses, Kickingbird Golf Club in Edmond celebrated its 50th anniversary on Friday with the return of past and pending members of the Oklahoma Golf Hall of Fame.

Kickingbird’s first-ever head professional was Art Proctor, who in November will be inducted into the Oklahoma Golf Hall of Fame. Also in this year’s class are Danny and David Edwards, Scott Verplank (competing in the Senior PGA Championship at Southern Hills in Tulsa this week) and architect Floyd Farley.

“A lot of memories,” Proctor said during Friday’s celebration. “A lot of good times. A lot of stories, most of them true.”

The OGA’s Oklahoma Open gained prestige by luring the state’s premier players to Kickingbird when the tournament was held there from 1979-85.

Morgan, Jones and David Edwards were at Friday’s anniversary. Morning and afternoon 18-hole “shambles” were held in conjunction with the celebration.

“Golf has been great for me and a lot of it happened here with the Oklahoma Open,” said the 74-year-old Morgan, an inaugural Hall of Fame inductee in 2015, who won seven PGA Tour titles and 25 tournaments on the Champions Tour (tied for fourth all-time). “We always enjoyed playing here. Art was great to all of us. We had a great time. I know they’ve had a great junior program all the time and that created a lot of good players throughout the years.” Edwards, who won four times on the PGA Tour and once on the Champions Tour, captured the Oklahoma Open on the Oak Tree Country Club East Course in 1994 and 1996. While attending high school, Edwards also was employed as a member of the first-ever “Range Rats” at Kickingbird the course actually opened.

“I guess my station in life has elevated a little bit because I was working here 50 years ago on opening day and I get to play today,” Edwards joked. “This is better.”

Jones, who won six collegiate tournaments (including the 1975 Big Eight championship) and was a four-time All-American at Oklahoma State, had been struggling on tour leading up to the 1983 Open. “Just like golf does, it clicked and I ended up beating (the late) Mark Hayes in a playoff,” Jones said. “I might be the only go on the face of earth who beat Mark head-to-head because he was such a solid player.”

Kickingbird officially opened its doors on May 27, 1971, and at its peak has averaged an astonishing 66,000 rounds per year.

“Edmond is a mecca for junior golf and high school golf in the United States of America, but I think you’d have to trace it back to its roots where Art gave anywhere from 20-30 kids a job every year,” said Baylor golf head coach and former OSU coach Mike McGraw, a local product who helped Proctor spawn Edmond’s prodigious growth in junior golf. “They didn’t make a lot of money, but they had an opportunity. Opportunity led to improvement. Improvement led to championships, and I don’t think that’s going to change anytime soon.”

The OGA Junior Boys & Girls, which has been held at Kickingbird every year since 2010, will be held June 7-10.

Shortly thereafter, Kickingbird will be shut down to undergo $14 million in renovations and improvements set to begin in July. The project is expected to take approximately 15 months to complete and will include a new clubhouse, a short-game practice facility on the site of the existing parking lot, a four-bay pavilion on the driving range which will include the latest in simulator and ball tracking technology, a new irrigation system, new greens and a new parking lot. A detached banquet hall will be built west of the new clubhouse.

“I wanted to congratulate the City of Edmond for putting the support behind this (renovation),” said Jones, who now serves as general manager at nearby Oak Tree National. “It’s always been a great facility and I think with the renovation, I think it’ll be one of the best in the country. It’s great the kids had opportunity to come out here and work.”

Also on hand was Steve Ball, who succeeded Proctor as Kickingbird’s second head pro. “The best thing I did was bring (current head pro) Brian Sorensen in here,” Ball said. “I got a resume one day from a kid from New Mexico State who wanted to be a golf professional. I remember looking at the resume. He was a good player and he graduated college in four years. That was pretty big.”