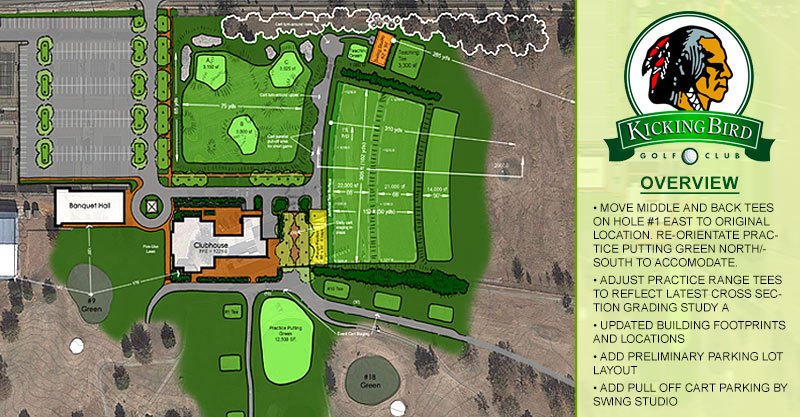 The city of Edmond has approved close to $14 million in renovations and improvements at Kickingbird Golf Course. The course will close on June 14, 2021 to begin the work and could possibly be closed until the fall of 2022.

The renovation will include a new clubhouse, a short game practice facility on the site of the existing parking lot, a four-bay pavilion on the driving range which will include the latest in simulator and ball tracking technology, a new irrigation system and new greens. A new detached banquet hall will be located to the west of the rebuilt clubhouse.

Director of golf Brian Soerensen said it is still being debated whether the new greens will be surfaced with bent grass as they are currently or go with one of the new ultradwarf Bermuda varieties.

The firm of Bockus Payne of Oklahoma City has been selected to do the architectural plans for the clubhouse and Sorensen said they have employed noted clubhouse designer and enhancer Tom Hoch of Oklahoma City.

Matt Dusenberry of Shorewood, Wis., has been hired as the golf course architect to oversee the new practice facilities and range renovations. The current parking lot will move to the west where tennis courts now exist.

Kickingbird is one of the state’s busiest and most well known public courses. Designed by Floyd Farley on rolling terrain and with the holes framed by large oaks and other hardwoods, it opened in 1972 and under legendary pro Art Proctor quickly became home of one of the states top junior programs, aided by a young Mike McGraw. The Oklahoma Open was contested there from 1979-85 and it is currently the annual site of the Oklahoma Junior Boys & Girls Championship. That event will be held in 2021 before the closing.

Funding for the project is coming from an existing and repurposed 2017 sales tax capital improvement fund. Look for much more on the Kickingbird project and several other ambitious restoration projects across the state in the April-May issue of Golf Oklahoma.

Watch a video here as the project is detailed for the Edmond City Council: