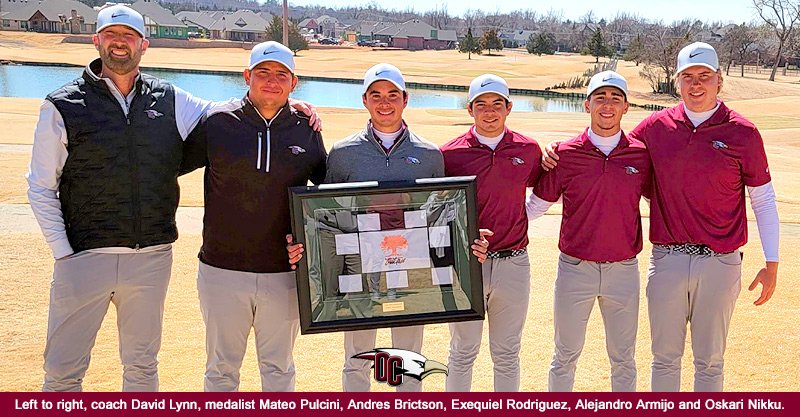 Pulcini, from Rio Cuarto, Argentina, posted a steady even-par 70 – with two birdies and two bogeys to go with 14 pars – on the 7,126-yard course, putting him at 1-over 211 for the tournament. He added the individual title to one he won in the Eagles’ fall season opener, the Missouri Southern Fall Invitational at Shangri-La Golf Club in Monkey Island.

Pulcini is the 15th player in OC golf history to have won at least two tournament crowns.

The Eagles – hosting an Oklahoma City-area event for the first time since fall 2011 – won a team tournament title for the fourth time this season and the 77th time in program history.

OC entered the round with a nine-shot lead over No. 17-ranked Henderson State (Ark.) and that lead never slipped below seven shots on Tuesday. OC’s final-round 289 gave the Eagles a three-round score of 862, with Cameron at 875, No. 14 Central Missouri third in the 14-team field at 876 and Henderson State fourth at 878.

OC junior Alejandro Armijo of Rio Rancho, N.M., tied for the tournament lead with 13 birdies, with five of those coming Tuesday as he shot a 74. He tied for fourth in the 78-man field at 215. Posting his first career top-10 finish was freshman Oskari Nikku of Tuusula, Finland, who tied for 8th at 217 after a final-round 74. Nikku had 11 birdies – fourth-best in the field – including three on Tuesday.

Freshman Exequiel Rodriguez of Buenos Aires, Argentina, shot a final-round 71 and tied for 23rd at 223 and senior Andres Brictson of Merida, Mexico, tied for 37th at 227 after firing a 75.

Cameron moved up one spot during the final round to finish in second led by a second place finish by freshman Hamish Murray.

Murray, who was in a 6-way tie for the lead entering Tuesday, followed up his 72 in the first round and 69 score in the second round with another 72 in the third to give him a 213 for the tournament, two back of Pulcini from OC.

Tyler Kaman had the low round of the day for CU, shooting a 71 to give him a 221 for the tournament, good for a top-20 finish. Trevor Mierl also finished in the top-20 individually with a 222 after carding a 72 in the final round. Preston Holmes shot 74 on Tuesday to finish with a 223 while Joey Kirk totaled a 225 54-hole score after his third round 75.

Hunter Drotts, who was competing as an individual at the Oak Tree Invite, shot a 77 in the final round to give him a 233 for the event.

Caleb Kimmel and Evan Griffith both shot 75 to pace Central Oklahoma to a seventh place finish. The Bronchos closed with a 302 to finish at 897.

Kyle Hickey and Ross Taylor added closing 76s for UCO, while Liam Coughlin had an 82. Bennett Baldwin shot 76 competing as an individual medalist.

Hickey had the top finish for the Bronchos, coming in 17th with a 218 total.

Central is back in action next Monday and Tuesday, traveling to Trophy Club, Texas for the Lion Invitational hosted by Texas A&M-Commerce.