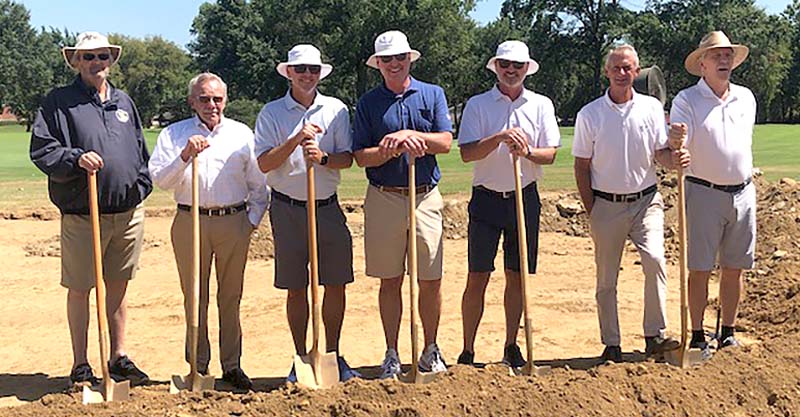 Tournaments Around Oklahoma Around the State
August 23, 2021August 24, 2021 Ken MacLeod

Were Jerry Cozby alive to see what transpired at his beloved Hillcrest Country Club Monday, he would have been the happiest man on earth instead of the most pleased observer in heaven.

The official groundbreaking, blessing and dedication of the Jerry Cozby learning center was the special occasion, and each of his three sons and wife Karole were all on hand for the ceremony.

A group of members led by Jim Curd, David Kedy, Jock Holliman and Bruce Robinett has led a fundraising drive that has raised over $230,00 for the two-bay indoor teaching center. Other members and friends of the club have made in-kind donations of their expertise and effort. Member Dale Forrest, owner of United Golf construction company, leveled the entire teeing area and laid fresh sod. Others contributing include Dan Keleher, Gorman Construction, Randy Lawrence, golf architect Tripp Davis and Hillcrest Country Club itself.

When completed, the center will have a teaching bay opening to the driving range and a second bay with simulators for year round learning and entertainment.

The ceremony was held one year to the day Jerry Cozby passed away due to multiple health issues. Coz, as he was known to all, was the head professional at Hillcrest for 41 years, an exacting boss who cared deeply and passionately about the game and his members as well as his family and co-workers. He is a member of both the Oklahoma Golf Hall of Fame and PGA of America Hall of Fame.

Chance Cozby, who runs the Waste Management Phoenix Open, flew in from the desert, while Craig Cozby, a sales manager for Ping, came in from Kansas City. Current head professional John Hron, who worked six years for Jerry, opened the ceremony by recalling his former boss’ training methods.

Karole and Cary then followed with emotional remembrances, followed by a blessing of the ground by Father Nick Phares of St. Luke’s Episcopal Church in Bartlesville, where Jerry and Karole began attending in 1969.

Following the ground breaking, the immediate family took a small phial of Jerry ashes and a taste of Jack Daniels to spread on the landing area on the par-5 18th hole.

“Dad was always complaining that he needed another 20 yards up the hill to have a chance to hit the green,” Chance said. “We’re going to give him that 20 yards.”