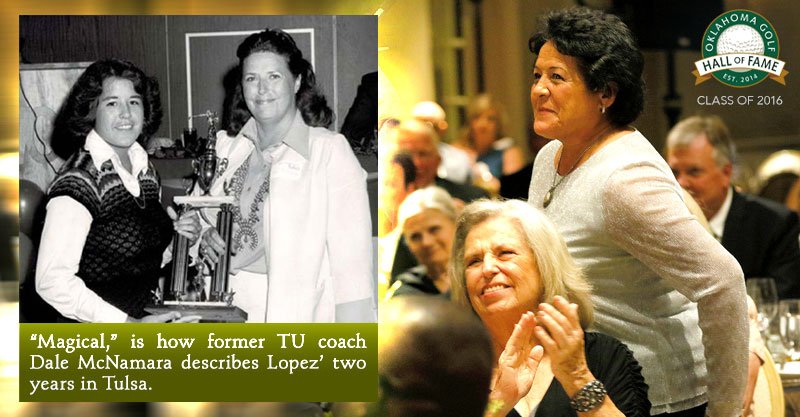 Nancy Lopez, who helped Dale McNamara kickstart the the University of Tulsa women’s golf dynasty by winning 11 of 19 events including the AIAW Championship during her two seasons in 1976 and 1977, called to pass on her memories of the only coach to offer her a scholarship that actually paid for her schooling.

“Dale was a great recruiter and a great coach,” said Lopez, an LPGA Hall of Famer with 48 LPGA tournament victories to her credit. “She was the only one to offer me a scholarship that actually paid some of the tuition.. I don’t know how she convinced the University to do it, because there were not many women’s athletic scholarships back then, but she did it.

“And then she was so supportive of us when we were there. She cared about us a people and not just golfers. She was like a second mother to me and kept us all under her wing.”

McNamara passed away early Sunday at the age of 86 due to complications from a rare form of cancer. Although the coach and her most famous player didn’t always keep in close contact through the years, they would touch base periodically and both had an enormous respect for the other.

McNamara watched Lopez finish second in the 1975 U.S. Women’s Open and knew she could be a cornerstone for what she wanted to build at Tulsa.

“I watched her on television at The Broadmoor and thought, ‘oh my God, she’s fabulous,’ ” McNamara told Golf Oklahoma when Lopez was inducted into the Oklahoma Golf Hall of Fame in 2016 (McNamara was inducted in 2006). “And then she came here with that million-dollar smile and personality. She was magical. She is magical.”

Lopez has been in contact with McNamara’s daughters Melissa and Cathy and said the coach, family, university and city all hold a special place in her heart.

“I always thought I would wind up living in Tulsa,” she said. “It just didn’t work out during my pro career, but I still love the city. Dale was the reason I came there and I owe a lot to her. She was just a great coach and a great person.”