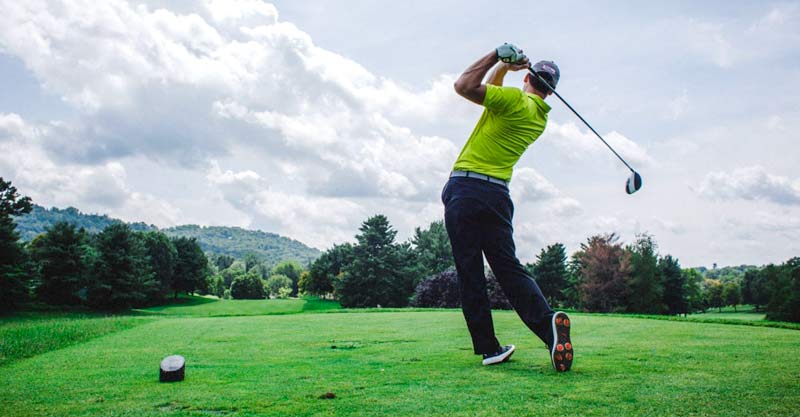 According to records, Guthrie Country Club hosted the first game of golf in territorial Oklahoma in May 1900. That year, a nine-hole golf course opened for play in Oklahoma City’s Maywood neighborhood, close to Northeast Twelfth and Stiles and the Jordan farm.

The course at Guthrie Country Club was created by Scottish immigrant and early golf course builder Alexander H. Findlay, who was also among the first to play golf in the United States. Other Scottish golfers followed Findlay to Oklahoma, including Leslie Brownlee, who in 1907 created the Oklahoma City Lakeview Golf Course, and Brownlee’s nephew, Arthur Jackson. Jackson’s Lincoln Park construction work and model caddie program earned him the title “the father of public golf in Oklahoma.”

Pennsylvanian A.W. Tillinghast, who designed and oversaw the construction of Tulsa Country Club and The Oaks, was likewise drawn to Oklahoma during the World War I era.

Check out some of the main championships in the state that shone.

In northeastern Oklahoma City, Twin Hills hosted the first men’s major. The PGA Championship was held at Twin Hills, founded in 1923, from October 17–23. The competition started on a Thursday and ended on a Wednesday due to the weather.

Oklahoma hosted the U.S. Open for the first time in 1958. The first two rounds were held on Thursday and Friday, and the last two were held on Saturday.

The 25th U.S. Women’s Open was held at Muskogee, Oklahoma, bringing the first women’s golf major to the Sooner State. Donna Caponi shot a 3-over 287 to win the U.S. Women’s Open for the second time in a row. Caponi finished with a final-round score of 6-over 77, and she avoided a Monday playoff with a double bogey putt on the 18th hole that hung on the lip before sinking.

The U.S. Open made a second trip to Tulsa, and this time the 6,873-yard course played shorter than it had for the previous two majors. The dates were June 16–19.

Hubert Green defeated Lou Graham, the champion of the 1975 U.S. Open, by one shot as he captured his first of two majors with a 2-under par 278. Only the two of them achieved a score below par.

The second PGA Championship was held at Southern Hills, hosting a major for the third time in 13 years.

The course’s length was reduced by 11 yards compared to the U.S. Open five years earlier. August 4–8 saw competition for the 64th PGA Championship.

In a three-hole aggregate playoff, Justin Thomas overcame Will Zalatoris to win his second PGA Championship (2017). Thomas tied the biggest comeback in PGA Championship history by winning after falling by seven strokes at the beginning of the final round.

During his opening round of the PGA Championship, Mito Pereira, who had led after 54 holes, drove his drive into a water hazard on the 72nd hole and made a double bogey to drop out of the playoff by one stroke. The last championship left golf fans ready to place their bets, who also like to follow this part experienced bettors choose in their golf betting picks at good websites.

The U.S. Women’s Open, just the second women’s major to be held in Oklahoma, made its 14-year absence at Cedar Ridge in Broken Arrow.

The event occurred in oppressively warm conditions from July 28 to July 31. Jan Stephenson, an Australian, captured her third and final major championship after shooting a 6-over 290 to win the match and take home $32,780.

The PGA Championship came back to Oklahoma, this time from August 11–14 at Oak Tree National in Edmond. 7,015 yards made up the par-71 course.

Sluman completed the second hole with a birdie and the fifth hole with an eagle. He went on to birdie the seventh, tenth, twelve, and fifteenth holes to earn $160,000.

From August 11–14, the PGA Championship will return to Southern Hills for the third time and for the fifth major overall.

With 6,834 yards, the course’s design was similar to that of the preceding PGA Championship. Nick Price won his second consecutive major title after finishing at 11-under par 269, catapulting him to the top of the Official World Golf Rankings. Since Walter Hagan was the last golfer to do so in 1948, it had been 70 years since a player won both the Open Championship and the PGA Championship in the same calendar year.

From June 14–18, the U.S. Open played its 101st edition in Southern Hills for the third time. Before hosting, the course received major upgrades.

The distance was increased by almost 100 yards to 6,973. Retief Goosen won the U.S. Open on Monday after defeating Mark Brooks in an 18-hole playoff. Tiger Woods’ run of four consecutive major championship victories was also broken by Goosen’s triumph. He received a T-12.

From August 9 to 12, Southern Hills hosted the 89th PGA Championship. The distance of the race was increased past 7,000 yards for the first time, coming in at 7,131 yards. Similar to the 2001 U.S. Open, Southern Hills underwent thorough improvements, including brand-new greens and updated bunkers.

Tiger Woods shot an 8-under par 272 to win his 13th major title and second consecutive PGA Championship. Only five golfers achieved a score below par.

The 104th PGA Championship, the second of four major tournaments on the 2022 calendar, will be contested by the finest golfers in the world at Southern Hills Country Club in Tulsa, Oklahoma.

This is the eighth major to be held on the course, which is set up as a par 70, 7,556-yard gauntlet this time.

The top 15 finishers from the 2021 PGA are also guaranteed entries, along with former PGA champions, recent winners of the other three majors, and the Players Championship.

Oklahomans saw the construction of new golf courses throughout the second half of the 20th century, with some remarkable work by Oklahoman architects. Courses in the state have been created by Floyd Farley, Don Sechrest, Duffy Martin, Randy Heckenkemper, Mark Hayes, Bland Pittman, Tripp Davis, Jerry Slack, and Lyndy Lindsey.