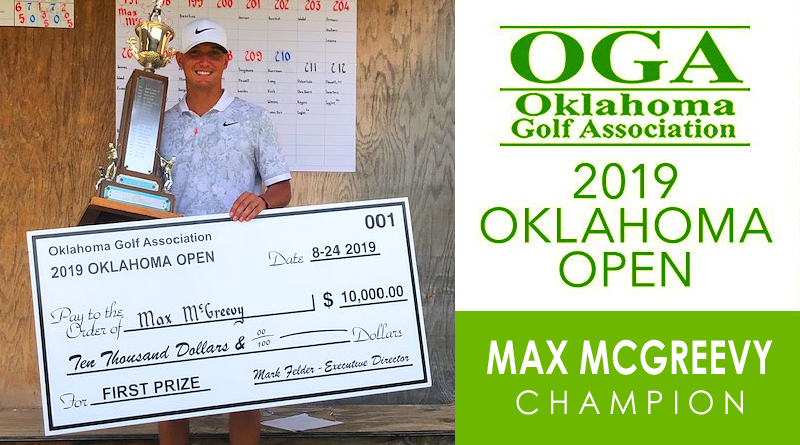 Max McGreevy has spent his summer strolling the Great Wall of China, slipping through crowds of demonstrators in Hong Kong and playing some very good golf on the PGA Tour China.

The Edmond native and former University of Oklahoma star returned home as the leader through 10 events on the tour’s order of merit. If he can maintain that position when he returns for the season’s final four events, he’ll earn a full exemption on to the Korn Ferry Tour for 2020.

So it was no surprise when this more mature version of McGreevy held off a back-nine charge by Preston Stanley of Katy, Texas, and another by former Bedlam rival Zach Bauchou of Stillwater to win his second Oklahoma Open in the past three years.

McGreevy closed with a 5-under 65 Saturday at Oak Tree Country Club’s East Course to finish at 13-under 197, one shot ahead of Stanley, who shot a final-round 64 playing two groups ahead. Bauchou, who finished his career at Oklahoma State in May, shot a 67 and finished two shots back.

McGreevy got off to a torrid start, giving himself close birdie looks on seven holes on the front nine and converting on four of them. Bauchou, playing with him in the final group, battled back with a birdie on 11 and made a great birdie on the 213-yard par-3 14th with the pin front right and just over the fronting pond. That pulled him within a shot.

Stanley, meanwhile, had eagled the par-5 12th hole then birdied holes 16 and 17 to tie McGreevy at 12-under. That tie lasted just a few minutes as McGreevy stuffed his approach on the par-4 16th hole to about 7 feet above the hole and rolled in the birdie.

McGreevy won this event in dominant fashion in 2017, shooting 15-under in just two rounds, a year he also earned conditional status on what was then the Web.com Tour. He struggled in his first attempt on that tour, but said he is much more prepared if and when he gets a second chance.

“I don’t know if I felt like I belonged that first year,” he said. “As I’ve seen some of my roommates, teammates and friends play well, plus I’m playing a little better, I definitely feel like I can compete with those guys now and excited to go back out there next year.”

“It was a fun battle today. I didn’t know Preston had tied me up. I thought if I could make pars down the stretch that 12-under would be good, so it’s a good thing that one snuck in there on 16.”

“I hit the ball about as good as I could have this week. I could have made some more putts, but I made enough. It was fun with dad (Brian) on the bag again. I’ve been over in China all year so my parents haven’t been able to watch me play, so that was nice. To get my name on that trophy again is really a great thing.”

Playing in China has been a enriching experience from both a golf and cultural standpoint. McGreevy said he hangs out with a group of about eight fellow U.S. competitors, sightseeing, sampling the food and rooming together.

“We try to get out and see something new every single week,” McGreevy said. “We’ve been to the Great Wall and a lot of cool spots and have some more lined up for these last couple of weeks. It’s been a joy playing there so far. The courses have been really good. Unfortunately the government doesn’t really like golf, so getting the schedule has been tough, but the PGA Tour does a great job running the events.”

McGreevy earned a $10,000 first-place check out of a total purse of over $64,000. The low amateur was Dustin Hasley of Tulsa, who plays for Oral Roberts University. He shot 4-under 206.