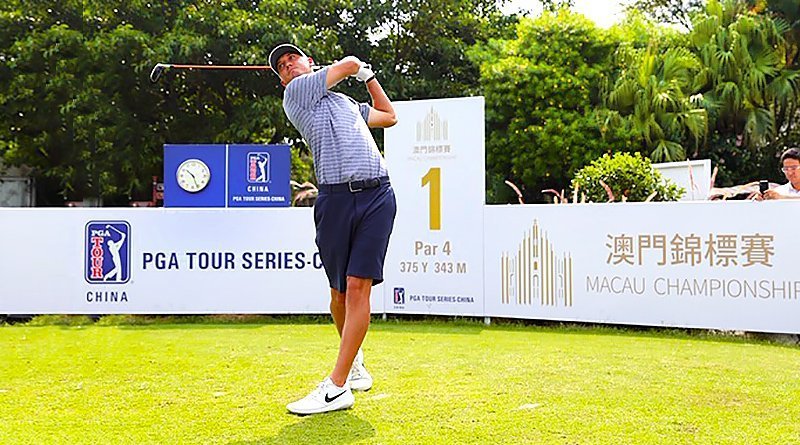 MACAU, China―At 8-under through 36 holes, Max McGreevy of Edmond put himself in excellent position to keep his No. 1 ranking on the Order of Merit as the PGA TOUR Series-China plays its 13th and final event of 2019.

Canada’s Justin Shin fired a 9-under 62 to move to 17-under and open up a five-stroke lead at the Macau Championship, the final event of the PGA TOUR Series-China season.

Shin managed to improve on an opening-round 63 by carding eight birdies, one eagle and a bogey on Friday at Caesars Golf Macau as he looks to win his first Tour title since winning the United Investment Real Estate Wuhan Open in 2015.

American Charlie Netzel carded a 63 to lie in second, at 12-under, two strokes ahead of Canadian Richard Jung (67) and France’s Cyril Bouniol (66), who is hoping to retain his fifth spot on the Order of Merit.

Order of Merit leader McGreevy fired his second consecutive 67 to lie in a tie for eighth and is on the verge of locking up full Korn Ferry Tour status for 2020 after No. 2 on the Order of Merit Trevor Sluman missed the cut. McGreevy is virtually assured to earn Player of the Year honors as it would take a variety of unlikely scenarios over the weekend for either Luke Kwon or David Kocher to overtake McGreevy.

As the season-ending event, officials raised the purse of the Macau Championship to a record RMB 2.1 million, giving players a chance for one final push to try and earn Korn Ferry Tour membership and pursue their goals of playing on the PGA TOUR.

“If I stay where I’m at right now, even if something crazy happens, I don’t think I can lose out on the Order of Merit,” McGreevy said. “It’s a great feeling, and I’m just looking for another chance to win and still play for a lot of money this week. Hopefully I can get another good check before I leave China. But I’m just looking to play another two solid rounds.”

With a winner’s check of RMB 378,000 up for grabs, the pressure is high as players look to finish inside the top 10 on the Order of Merit. The No. 1 finisher on the money list after this week will earn full playing rights for the 2020 Korn Ferry Tour, while finishers 2-5 will earn membership. Players 6-10 will bypass the second stage of the Korn Ferry Tour Qualifying Tournament and earn direct entry into the Final Stage in Florida in December. McGreevy began the week with a sizable RMB 177,258 lead on the Order of Merit over compatriot Trevor Sluman, but as fans saw in 2018, nothing is guaranteed. At the Tour’s final event of 2018, Charlie Saxon also held a big lead over Callum Tarren before the Englishman fired a final-round 62 to finish solo second in the tournament and steal the No. 1 spot.

However, a similar scenario appears unlikely as McGreevy, who played at the University of Oklahoma with Saxon, has been the most-consistent player of the year with nine top-10 finishes. He now looks primed to return to the Korn Ferry Tour, where he played a full season in 2018.

Behind McGreevy and Sluman on the Order of Merit are American David Kocher (RMB 755,640), South Korean Luke Kwon (RMB 594, 597), and France’s Cyril Bouniol (RMB 574,168). If everything plays out right, either Kocher or Kwon could also end up taking the No. 1 position, while Bouniol cannot mathematically catch McGreevy and will focus on trying to keep his spot inside the top five.