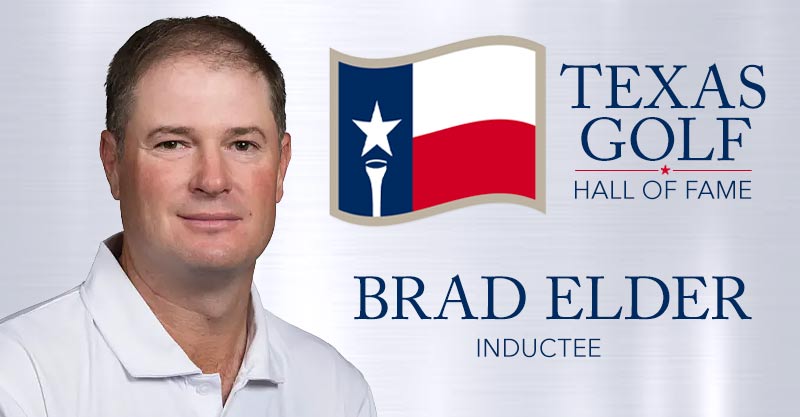 The Texas Golf Hall of Fame today announced six inductees for its Class of 2022, including former Tulsan Brad Elder.

The 2022 inductees join 145 individuals and 13 facilities already in the Hall of Fame.

The five individuals and one facility will be honored at the Texas Golf Hall of Fame’s traditional Gathering of Eagles golf tournament and marker unveiling at Brackenridge Park and with a formal induction dinner ceremony at San Antonio Country Club, both to be held on Monday, October 17th. All festivities are open to the public. More information can be found by visiting www.texasgolfhof.org or contacting the Texas Golf Hall of Fame’s Executive Director (katie@texasgolfhof.org).

Elder learned the game at Mohawk Park, where his father Ross was the golf professional. He moved to Plano, Texas and began his amateur prowess by winning the 1994 5A Boys State Golf Tournament individual title and 1994 Western Amateur. Elder then headed to The University of Texas where he earned All-America Honors in each of his four years, including twice being named to the first team. Elder won the 1995 Texas State Amateur.

Elder’s banner year as an amateur was in 1997. He racked up undefeated showings in both the Walker and Palmer Cups and won the 1997 Northeast Amateur. As a Longhorn that year, he was under par in 18 of 37 competitive rounds played. Elder was awarded the Jack Nicklaus Award, given annually by the Golf Coaches Association of America to the golfer who excels throughout the course of the entire season, and was the Fred Haskins Award winner, presented annually by the Haskins Commission to honor the most outstanding collegiate golfer in the United States. It is college golf’s equivalent to college football’s Heisman Trophy. He finished his collegiate career as the nation’s No. 1 amateur according to Golfweek/Titleist amateur rankings.