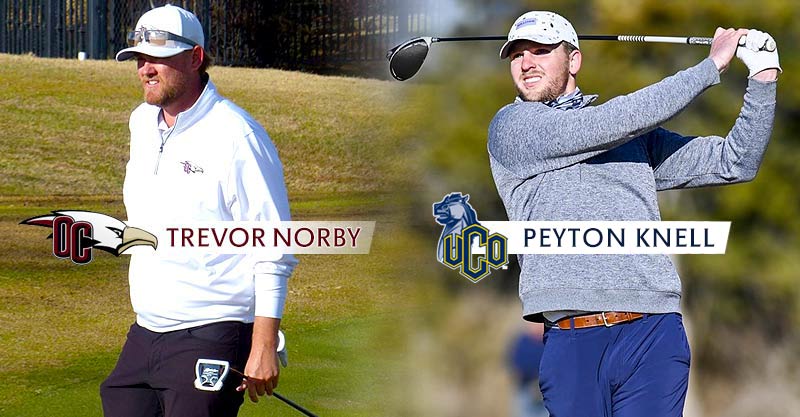 Playing on a course with which they’re quite familiar, Norby seized the individual lead and the 18th-ranked Eagles did the same in the team race through two rounds on Oak Tree Country Club’s East Course.

Norby, a senior from Carlsbad, Calif., followed a first-round 69 with a four-under 66 and held a one-shot lead over Andrew Beckler of Washburn (Kan.), who posted a second-round 64 and was six shots ahead of the third-place golfer in the 104-man field. Norby won the Broncho Invitational the last time it was played, in 2019, and has four collegiate wins to his credit.

The Eagles also seized control in a 20-team field that included five teams currently ranked in the NCAA Division II coaches’ poll. During a first round in which winds gusted from the west up to 35 mph, the Eagles posted a team score of 293, good for a two-shot lead over No. 11 Arkansas Tech.

Thanks in good part to Norby’s 66 – which included six birdies – the Eagles extended that lead to six shots in the second round by shooting a 1-under 287. At 580, OC’s nearest competition is another local squad, tournament host Central Oklahoma. Washburn was at 588, with Arkansas Tech at 592 and No. 25 Henderson State (Ark.) tied with Maryville (Mo.) for fifth at 596.

No. 15 Dallas Baptist (Texas) and No. 23 Central Missouri also are in the tournament.

OC freshman Mateo Pulcini of Rio Cuarto, Argentina, posted rounds of 72 and 73 and was tied for eighth individually at 145. Sophomore Alejandro Armijo of Rio Rancho, N.M., improved from 77 to 72 at was tied for 21st at 149.

OC also is fielding a B team in the tournament, and that quintet was 19th in the team race at 660. The top round of the day from that squad was a second-round 77 posted by freshman Chase Gardner of Snohomish, Wash.

“We didn’t start well today but we got better as the day went on,” UCO head men’s golf coach Josh Fosdick said. “We need to keep getting better throughout the final round tomorrow. We have a chance to win and we need to find a way to get it done.”

Jacob Lackey is Central’s low man after 36 holes. The junior from Kansas is tied for fifth in the individual standings after posting rounds of 75 and 69. His second round 1-under-par was one of six under-par rounds in the afternoon. Lackey eagled the par-4 10th and also had birdies on the par-5 fourth and 12th holes.

Peyton Knell is Central’s second low man and is tied for 12th in the individual standings. Knell shot a 146 Monday, posting a first round 5-over 75 before shooting just 1-over in the second round. Knell also birdied 4 and 12 and sank 13 par putts in his second round.

The two individuals for the Bronchos are Ethan Galvan and Ross Taylor. Galvan posted rounds of 76 and 77 while Taylor shot 84 and 74.